Coyotes and hyenas are two animals known for their intelligence, stealth, and voracious appetites. They are both apex predators and scavengers that don’t share a habitat.

However, if hyenas met coyotes, who would win a fight?

Coyotes are canids similar to but smaller than wolves. Hyenas may look like canids, but they are closer related to cats. Both species have similar behaviors and diets. However, hyenas are stronger than coyotes. They have stronger jaws and more powerful strikers. In a one-on-one, hyenas would likely win, but coyotes are faster and could escape the aggressors.

The table below shows a quick comparison of hyenas vs. coyotes*:

*For comparison purposes, we considered the striped hyena species, which is the most widespread in the world. Spotted hyenas and other hyena species only live in Africa. Coyote data in the table above refers to general averages. Strength and characteristics may vary from one coyote subspecies to another.

Strike forces in the table were calculated based on the maximum weight multiplied by the top speed mentioned in the table.

Coyotes and hyenas are two of the smallest apex predators in their respective geographic ranges. Between the two, however, coyotes are slightly larger, measuring between 3.3 and 4.3 feet in length.

Striped hyenas generally measure between 3.25 and 3.75 feet. However, spotted hyenas are larger, and they can actually grow larger than coyotes, reaching an average length between 4 and 5.9 feet.

Height-wise, striped hyenas grow between 26 and 30 inches tall at shoulder level. Coyotes are slightly shorter, with an average height of 24 inches at the shoulder.

However, considering that these ranges include the extremes, most coyotes and striped hyenas are about the same size.

Despite being slightly smaller, hyenas actually have bigger paws than coyotes. In fact, their paws measure around 3 by 4 inches. Coyotes have a paw print of about 1.5-2 by 2.5 inches.

A major difference between coyotes and hyenas is the shape of the paw.

Coyotes belong to the Canidae family and are members of the Caniform suborder, the same as wolves and dogs.

Their paws have a rectangular shape, with a narrower width and longer length. The claws are also visible since coyotes don’t have retractable claws.

While their physical appearance may resemble that of canids, hyenas are members of the Feliform suborder. This suborder includes cats, civets, mongooses, and allies, meaning that hyenas are more related to big cats rather than coyotes.

As such, their paws are rounder – similar to the paws of big cats – and the prints have less visible claws. However, hyenas don’t have retractable claws, so their tips would still be visible in the prints.

One of the main differences between coyotes and hyenas is the weight, with the latter being heavier and stronger than the former.

Typically, striped hyenas weigh between 57 and 90 pounds. Their bodies are stocky and muscular; hence, their weight.

Coyotes are physically larger, but they have more slender bodies. Their mass ranges from 20 to 50 pounds, making them about two times lighter than hyenas. The lower weight enables them to move faster.

However, when it comes to striking force, hyenas have an advantage.

As mentioned above, coyotes are lighter and faster than hyenas. Reaching speeds up to 43 miles per hour, they can move with incredible agility when pursuing prey.

Hyenas are predators, but they are mostly scavengers. Their stockier bodies can’t move as fast, enabling them to only reach top speeds of about 31 miles per hour. That’s still a lot faster than most people, but it is quite a poor performance in the apex predator world.

In fact, not only can coyotes outrun hyenas, but lions, tigers, and even brown bears can move faster than hyenas.

Another advantage a coyote would have in a fight is longer teeth.

According to research, coyote teeth can grow up to 1.45 inches in length. Meanwhile, hyenas’ canines are slightly shorter than an inch.

However, having longer teeth is an advantage only as far as potential injuries and wounds are concerned. That’s because hyenas have stronger jaws.

The reason why longer teeth aren’t actually a noteworthy weapon for coyotes is that hyenas have stronger jaws and a bite force almost two times higher than coyotes.

A study comparing the bite forces of large carnivores reveals that hyenas have a bite force quotient (BFQ) of 113, whereas coyotes’ BFQ is only 88. This is the equivalent of about 1,100 PSI of bite force for hyenas and only 727 PSI for coyotes.

See also  Can Lions Swim? Yes! (But They Prefer Not To)

Thanks to the higher bite force, hyenas can inflict a lot more damage compared to coyotes. In fact, while the latter can tear the flesh off bones and sometimes chew them, hyenas can actually pulverize bones and eat them.

Another point for hyenas comes from their strike force.

Even though there are few studies on the actual strike forces of animals, the impact force is relatively easy to calculate by multiplying the top speed by body mass.

For the purpose of this comparison, we considered the top speed each species can reach and multiplied it by the highest weight range.

While coyotes are faster, they are a lot lighter than hyenas. This puts them at a disadvantage, allowing them to muster an impact force of only 2,150 lb.-ft./s, which is roughly 66 pounds of force.

Hyenas are slower but a lot heavier, so they manage to reach an impact force of 2,790 lb.-ft./s, which is about 87 pounds of force. There is no doubt who would come out victorious in a clash based on body strength alone. 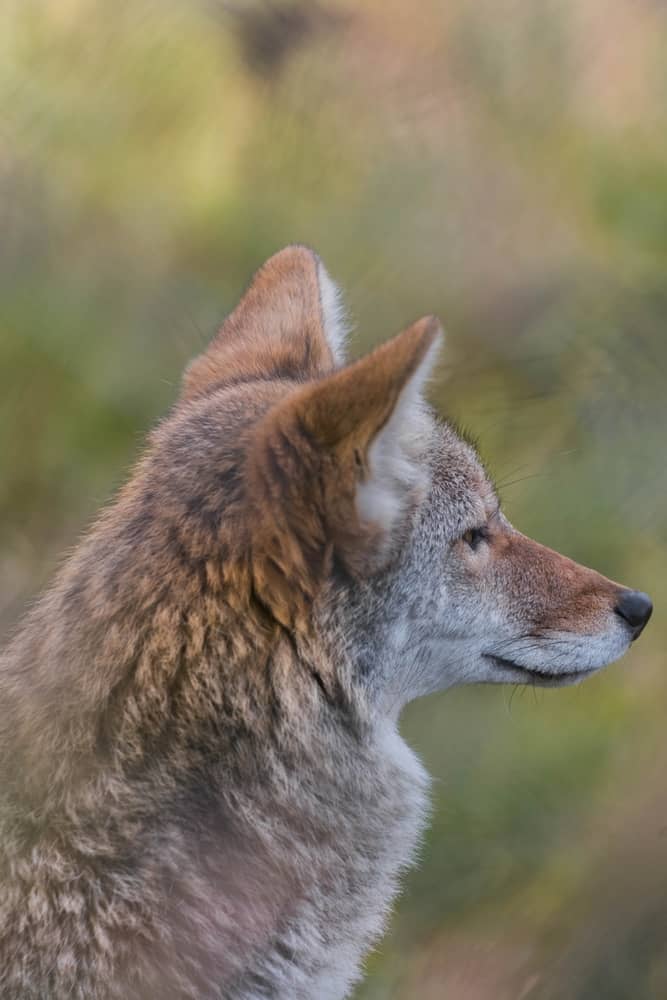 Coyotes and hyenas are both semi-social mammals. Both species live in small family groups and mostly hunt or forage alone.

Groups share dens where members sleep together during the day. Both hyenas and coyotes are primarily nocturnal animals. However, it’s easy to spot coyotes and hyenas alike being active during the day.

A difference in behavior is observed in each species’ breeding habits.

Coyotes are monogamous mammals and generally mate with the same partner throughout their lives.

They usually breed once a year – generally between January and March, and can have as many as 19 offspring per litter (even though they usually give birth to six or fewer pups) after a gestation period of about 65 days.

Pups are weaned after about 49 days of life, and both sexes reach sexual maturity in about 10 months.

Hyenas live in socially monogamous pairs; however, both partners are known to mate with other members of the clan or even with hyenas belonging to different clans.

Breeding is non-seasonal for hyenas, and the gestation period is about 90 days. Litters are also a lot smaller compared to coyotes, a hyena giving birth to up to 3 cubs on average.

While hyenas and coyotes are two apex predators, they are not exclusively carnivores. In fact, both species have omnivorous diets.

Striped hyenas are predominantly scavengers, their diet consisting of carcasses and carrion of larger herbivores, including zebras, gazelles, and impalas. Prey mostly consists of small mammals and birds, including rodents, hares, and reptiles.

Whether they hunt or feed on carcasses, hyenas generally supplement their diets with plant materials, mostly fruits.

Similar to hyenas, coyotes are opportunistic scavengers, even though they can hunt and kill prey themselves if they want.

Their diets are mostly made up of carrion and carcasses left behind by other predators, such as wolves and bears.

Coyotes also hunt and kill small deer (usually fawns), rabbits, rodents, and even livestock, poultry, and pets – including cats and dogs. They also supplement their diets with plant materials, such as berries and some grasses.

Coyotes and hyenas live in different geographic ranges (North and Central America, and Africa and Asia, respectively). However, their habitats are not that different.

Coyotes are adaptable creatures, but they are generally found in grasslands, forests, deserts, and swamps.

Hyenas generally live in scrub woodlands, but they can also be found in grasslands, deserts, and savannas.

Both species can live near human settlements.

Lastly, another difference between coyotes and hyenas is their conservation status.

Coyotes are a common species populating entire North America and parts of Central America. They are not threatened and actually have the least concerned status.

These mammals can be hunted year-round in most American states on a general license. However, regulations and hunting seasons can vary from state to state.

Striped hyenas are a near threatened species. They can be hunted in some countries, such as Tanzania. However, most countries ban hyena hunting.

Coyotes and hyenas may live in different parts of the world, but if it would come to a fight, hyenas would likely win.

Even though they are slightly smaller than coyotes, they have bulkier bodies and are heavier. They have a stronger impact force, as well as a stronger bite force (despite the shorter canines compared to coyotes).

Hyenas also have larger paws; neither of the two species has sharp claws, but hyenas can inflict more damage. In a one-on-one, a hyena would always be at an advantage, even though the coyote can avoid severe injuries by fleeing – coyotes are much faster than hyenas.