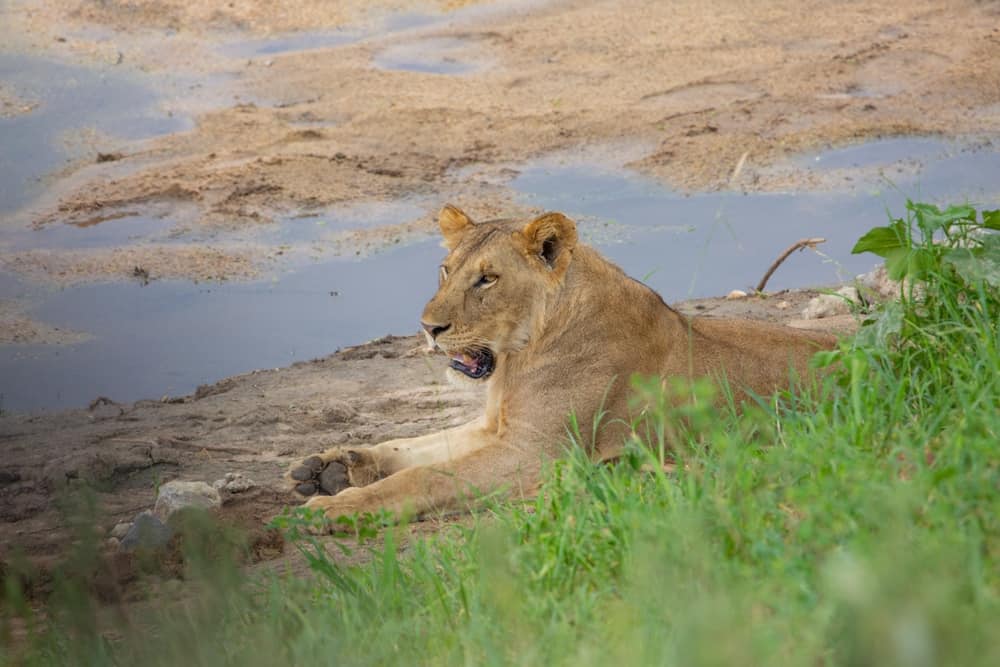 As apex predators, lions are undoubtedly powerful and strong. They’re most often seen stalking and chasing their prey on land, but a common question is whether or not they can swim.

Although lions don’t often swim, they’re capable of swimming, thanks to their mammalian instincts, strong bodies, and powerful legs. They may enter the water to cool down, chase prey, or travel; some lion species have even adapted to hunting in the water. Lions live in environments near water sources because they offer hydration and attract prey.

Read on to discover why lions are capable of swimming, the reasons they must live near water, and other related requirements for their habitats.

Are Lions Capable Of Swimming?

Lions aren’t typically thought of as swimmers, but they are capable of swimming. They don’t often get the chance to swim, but are willing to cross bodies of water if necessary. Lions in warm climates will occasionally get into the water to cool off as well.

Lions, like most mammals, instinctively know how to swim, even without any form of training. A lion’s strong and compact body, paired with its powerful legs, can perform well in the water when it comes to paddling and swimming.

Similar to many other mammals that live on land, lions can swim by moving their front and back feet. Since a lion’s body has a density similar to that of water, it can float and thus use its legs to control direction and move it forward.

There are a few reasons why lions might get into the water and swim.

First, lions may get into the water or swim to cool off. They typically live in hot environments. A savanna, for instance, usually has temperatures ranging from 68 to 86 degrees Fahrenheit.

Getting into the water is an easy way for lions to lower their body temperature and obtain relief from the sun’s heat.

Lions may also enter the water and swim as they chase prey. When a lion hunts, its usual strategy is to begin by stalking its prey. Then, the lion displays its explosive speed as it bursts forward to run down its target.

If the prey happens to make its way into the water, there’s a chance the lion will as well, although lions get quite tired after running short distances.

If the lion successfully catches its prey, it bites its neck until the prey has been strangled. After that, it’s time to enjoy the meal.

There are some specific lion populations in Africa that have adapted to hunting in water.

Prides of Tsaro lions, for instance, stampede buffalo into the water and kill off the weaker members of the group. They continue to herd the buffalo through the water, completing attack after attack for hours at a time.

Lions are social creatures that live together in prides and tend to travel together as well.

If they happen to come across a river or other body of water during their travels, they’ll cross it by any means necessary, which may include swimming.

Although this isn’t an everyday occurrence, traveling through water can happen, and lions are capable of swimming to get to their intended destination.

Do Lions Live Near Water? 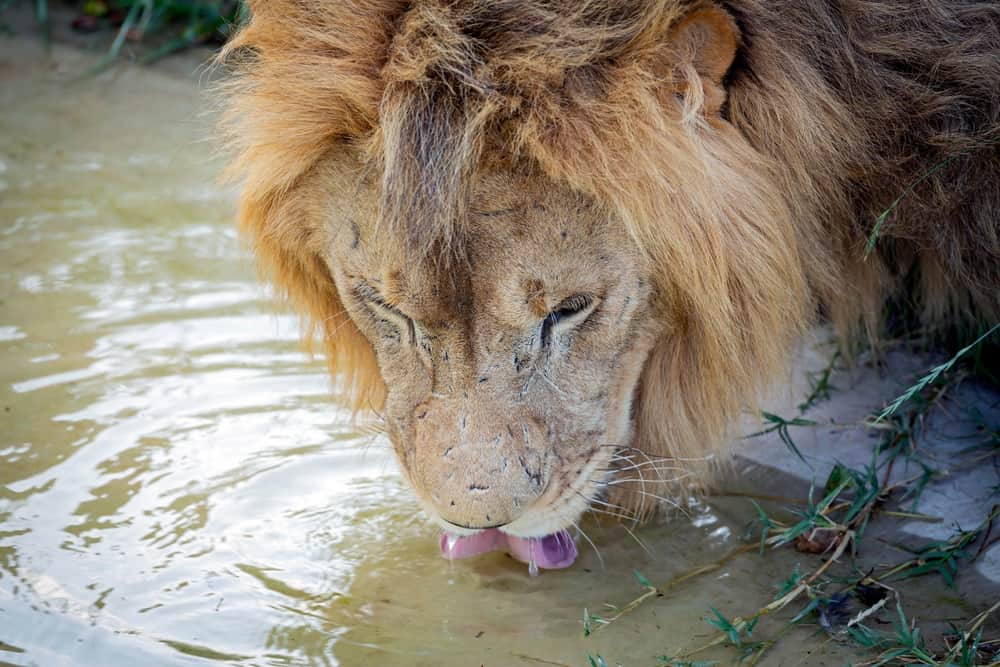 Today, lions only live in Africa and one small part of India (aside from lions that live in captivity). A lion’s habitat can vary quite a bit. Deserts, open plains, dry thorn forests, and thick brush are all possibilities.

Woodlands, scrubby areas, beaches, mountain ridges, and grasslands are suitable environments, too. The only areas in which lions do not live are arid deserts, which are extremely dry and barren, and tropical rainforests.

See also  How Fast Can A Crocodile Swim? [Faster Than A Human!]

Even with all of these potential habitats, there are still specific requirements a lion’s environment must meet.

Lions don’t have to drink water daily because they can obtain moisture from their prey and plants, but they do need regular access to water.

Not only is water an indispensable source of hydration, but it also helps lions locate prey. During the dry season, lion prides often spend time near water sources.

Their prey need water, too, so they will eventually come by these water sources to quench their thirst.

Unfortunately for the prey, this means that lions can obtain both food and water without having to move around or put in much effort.

Water also offers an opportunity for lions to cool down on a hot day. Although lions aren’t often seen going for a swim, they have the physical attributes and instincts necessary to do so.

The availability of prey is arguably the most important requirement for a lion’s habitat. Lions cannot survive without prey; they’re carnivores and must eat meat to survive.

Lions prefer large herbivores like giraffes, zebras, buffalos, and wildebeests. They also enjoy smaller animals like warthogs and impalas (a type of antelope).

Often, living near a water source means that lions will have access to plenty of prey. All animals need to stay hydrated, so many of the lions’ favorite food sources will be stopping by the water at some point.

Sometimes, lions swim through the water as they hunt their prey.

Lions spend the hottest hours of the day sleeping in the shade, so shade is absolutely essential to their environment. It helps them to thermoregulate, as they will begin to pant when exposed to direct sunlight. Lions occasionally enter nearby water sources to cool down as well.

Shade in a lion’s habitat is most often provided by large rocks, bushes, and trees.

To successfully stalk and capture prey, lions need to have cover. This is usually provided by trees, bushes, or long grass.

Some studies even show that lions prioritize cover over the availability of prey because it increases their chances of catching their next meal. If prey is available but lions don’t have the tools they need to catch it, it’s not worth much to them.

Lions do best in environments where there is a good mix of cover and open areas. This way, they can both stalk their prey and chase it effectively.

As mentioned above, lions will sometimes enter water and even swim as they chase and attempt to catch their prey.

Lions don’t often swim, but this isn’t because they’re incapable of swimming. Most mammals instinctively know how to swim, and lions have compact bodies and powerful legs that allow them to paddle and navigate the water.

Aside from a refreshing swim, there are other reasons that lions may enter water sources. Water gives them a way to cool down, as they typically live in hot environments. In some cases, they may need to cross bodies of water as they travel.

Another reason lions may go into the water and swim is to catch prey. A chase may lead them there, or they may be one of the lion species that has adapted to hunting in the water.

Water is a requirement for a lion’s habitat. Not only do lions need regular access to water for hydration, but water sources also attract potential prey. Prey availability, shade, and cover are all required for a lion’s environment as well.