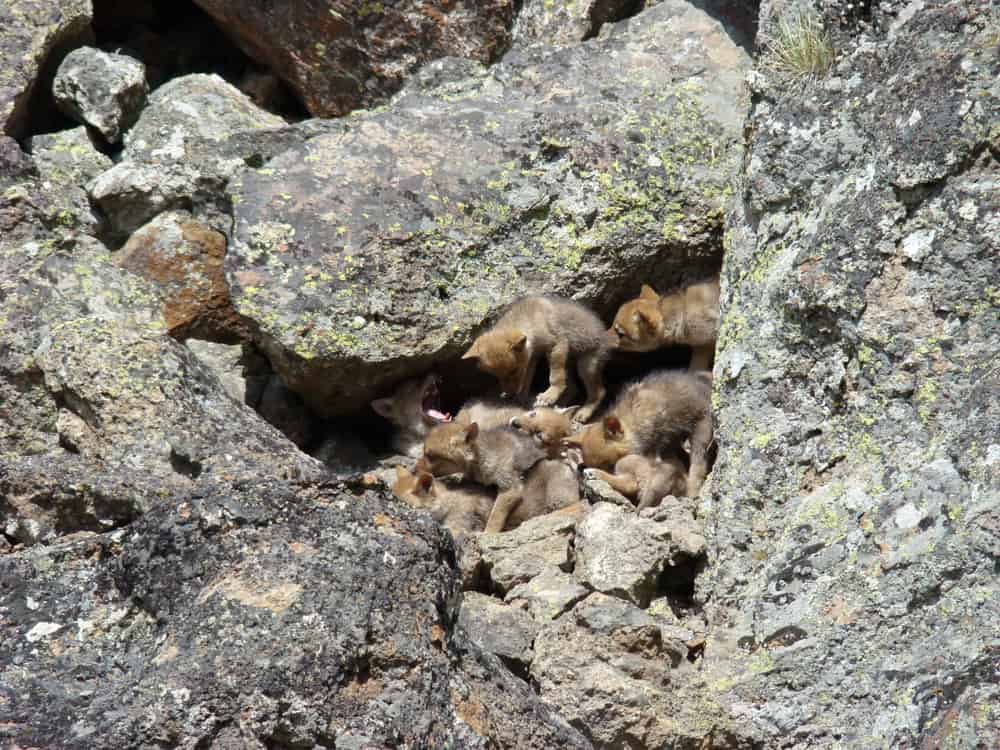 Coyotes and foxes are two different species in the Canidae family. Both of them can be found in a variety of habitats across North and Central America.

Even though coyotes and foxes don’t normally share a territory, they can coexist and dig burrows in the same geographic range.

Telling a coyote den from a fox den could seem challenging, but there are ways to recognize them.

Coyotes and foxes alike generally dig burrows in open patches of native grass or shrub and forest edge areas. However, fox dens have larger entrances and chambers. The tunnel length also varies between the species; coyotes dig tunnels up to 50 feet in length, whereas most fox tunnels have a length of under 23 feet.

The table below shows a quick comparison of fox dens vs. coyote dens*:

*Data in the table refers to self-made coyote and red fox dens. Both species can sometimes take over existing dens or burrows originally built by other species or rest in hollow trees or crevices. Characteristics of these dens can differ from the ones mentioned in the table. Fox dens belonging to species other than red fox may have different characteristics.

While coyotes and foxes live in the same geographic areas, foxes generally avoid coyote territories. That’s because coyotes often kill foxes – even if they don’t eat them – to prevent them from causing resource scarcity.

However, some studies reveal that these two mammals are slowly learning to coexist in urban areas, including the proximity of human settlements and suburban parks.

Since these predators are opportunists, both of them can go after livestock and poultry, and they can even kill cats and dogs. Coyotes and foxes alike can also mess with garbage cans for access to food scraps.

Sometimes, identifying the species by its den is necessary for proper wildlife management.

Coyotes and foxes choose similar locations for their dens. Contrary to popular belief, though, their dens are not necessarily hidden from view.

Coyotes generally dig their burrows in open patches of native grass or at the edge of dense thickets.

Foxes aren’t that picky about the site choice, but they also prefer bare areas and agricultural lands. Fox dens can also be found at the edge of forests or shrub patches.

Both species can choose entrance locations that are concealed from view, such as areas covered by lush vegetation. However, a lack of vegetation doesn’t constitute an impediment for digging a burrow in a chosen spot.

An important difference between coyote and fox dens is their depth, with foxes generally digging deeper burrows.

Unlike foxes, coyotes are not solitary. They form packs, and males generally help their mates to care for and defend the young.

Other non-breeding pack members may also be involved in raising the new generations. As such, coyotes don’t have the same need as foxes to dig deep burrows. 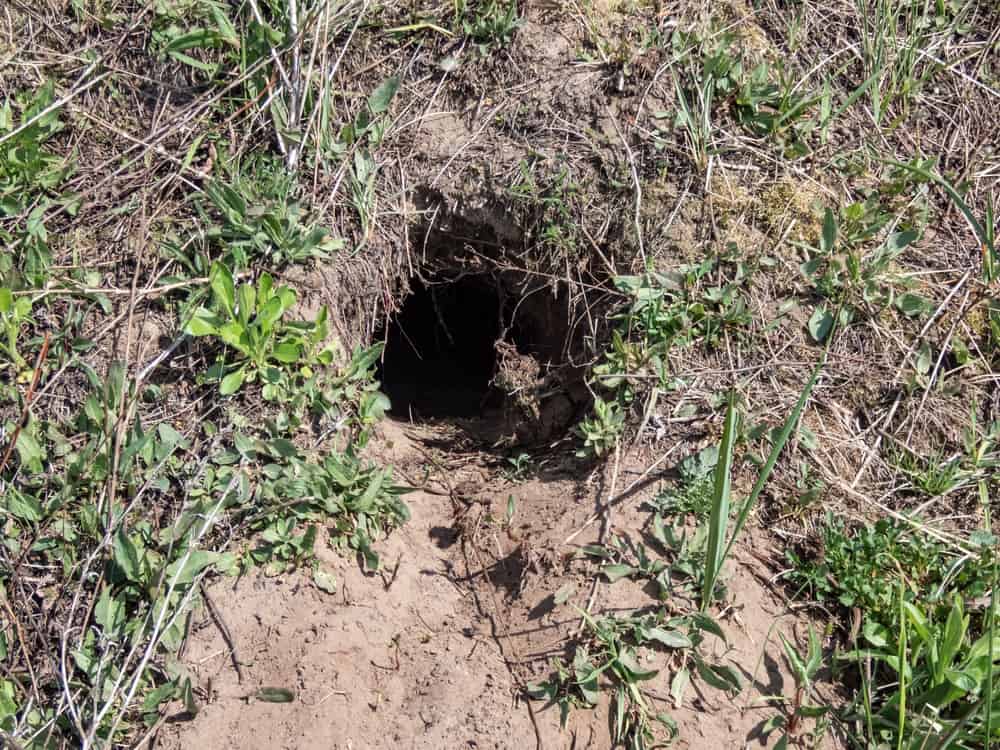 Another crucial – and paradoxical – difference is the entrance size.

As animals, foxes are a lot smaller than coyotes, measuring around 18 to 33.75 inches in length. They are also lighter, weighing between 6 and 24 pounds.

Coyotes are about twice the size of a small fox, having a length between 32 and 37 inches. They also weigh between 20 and 50 pounds. Therefore, it would only seem logical for a coyote den entrance to be larger than a fox den entrance.

However, the contrary is true.

Fox dens have large entrances measuring between 16 and 27 inches in diameter. Coyote den entrances are a lot smaller, with diameters between 11 and 15 inches.

Coyote and fox dens are similar from a layout perspective, even if they vary in size. A characteristic both share is the presence of multiple entrances.

Generally, both fox and coyote dens have only one entrance in the early season. These mammals build additional entrances as the pups grow.

However, new litters may also be born in dens that already have more than one entrance since both coyotes and foxes use the same dens for lengths of time.

Generally, both coyote and fox dens have up to three entrances. However, they can have more access points.

As mentioned above, coyote dens and fox dens have a similar layout. The entrance or entrances don’t provide access directly to the chamber but to a tunnel that leads to the chamber (or chambers) where the females nurse their offspring.

These tunnels are sloped downward from the entrance towards the chamber; the actual slope can vary based on the terrain and den depth, and their length can also vary.

There aren’t important differences between coyote and fox dens in this department, even though fox tunnels seem to be longer in some instances.

As indicated by the entrance size, foxes generally like roomier dwellings compared to coyotes. Thus, the fox den chambers are generally larger than those of coyote dens.

To be more specific, fox den chambers usually have a diameter between 1.6 and 3.5 feet. Coyotes don’t mind narrower spaces, their chambers measuring between 0.5 and 1.65 feet in diameter.

The reason fox dens are usually larger is that, more often, they accommodate more females and their young.

Coyotes, on the other hand, only use dens voluntarily to give birth and nurse their young. These dens are occupied by only one female at a time (since coyotes generally live in packs with only one mating pair).

The other pack members and the male protect the den and the young once they emerge from the burrow but rarely sleep inside.

Things are slightly different with foxes.

Like coyotes, they are generally monogamous. However, male foxes are known for mating with several females at a time. When this happens, female foxes mated to the same male can share a den.

There are also instances when two red fox pairs share the same den, even if each pair is made up of monogamous partners. Thus, the need for larger chambers and larger dens in general.

Another similarity between coyote and fox dens is that both dwelling types generally have several chambers. Yet, coyotes are less likely to build intricate structures.

Because coyotes only use dens voluntarily during gestation and nursing, their burrows usually consist of only two chambers.

The main chamber is used as a nesting and nursing area for the female and her pups. A terminal chamber may serve as a food cache.

Fox dens also consist of the main nesting chamber and a food cache. However, in dens shared by two pairs or more females, foxes can dig as many chambers as necessary to accommodate all occupants.

While it is not sure how many dens foxes and coyotes have, it is certain that both species build and use several dens at any given time.

This behavior is closely related to safety – by using more than one den, foxes and coyotes can easily move the pups if one den has been disturbed or if they sense danger.

A common misconception is that coyote and fox den entrances are oriented in a way to let sunlight pass through. However, this isn’t true for any of the two species.

A study about coyote denning habits reveals that terrain slopes and the position of the sun have nothing to do with the entrance orientation. Researchers concluded that entrances are probably oriented in such a way to prevent winds from seeping in.

This makes more sense as far as warmth retention is concerned since sun rays wouldn’t be able to penetrate all the way to the chambers anyway.

Foxes have a more sporadic pattern in choosing the entrance orientation; in fact, there seems to be no prevailing pattern. The terrain slope and landscape structure are most likely involved in the choice.

Do Foxes And Coyotes Use Dens All Year Round?

Since these two species dig burrows and build dens, some people may believe that foxes and coyotes sleep in dens all year round.

However, the truth is that coyotes prefer using dens only for natal purposes. The packs may gather in dens or other sheltered areas in winter, but they mostly sleep and rest above the ground.

They also build resting – or earthen – dens, which are shallower and smaller than natal dens, but they often sleep in tree hollows, crevices, and other sheltered places above the ground.

Coyotes and foxes belong to the same family, and they have similar denning habits. Coyote dens and fox dens are similar in almost everything except the size.

Despite foxes being smaller than coyotes, they actually have larger dens. The entrance and nesting chambers are bigger than those of coyotes, mainly because several females and their young can share the same den.

Coyote females usually use the den alone with their pups; thus, coyote dens have smaller entrances and chambers.

Both coyote dens and fox dens can have two or more chambers, up to three or more entrances, and are accessed through long tunnels that can reach 50 or more feet in length.