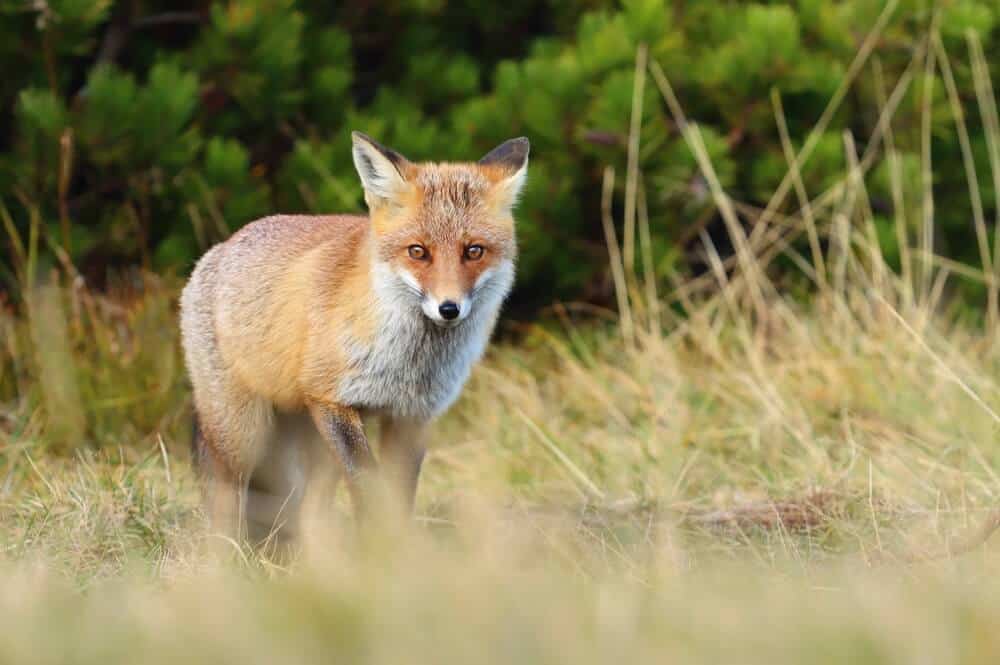 Foxes and coyotes are widely distributed throughout North America. Interactions between these species are common, but the two mostly ignore each other in the wild.

However, a carcass can easily change the social dynamics and turn these animals from tolerant towards each other to aggressive.

Coyotes are about twice as large in size and three times heavier than foxes. They are also faster, reaching speeds up to 43 miles per hour vs. 30 miles per hour for red foxes. Foxes have a bite force of around 307 PSI, whereas coyotes bite with a strength of 727 PSI. In a one-on-one fight, the fox wouldn’t stand a chance.

The table below shows a quick comparison between coyote vs. fox*:

*Data in the table was sourced from research papers, scientific journals, magazines, and other official sources. For comparison purposes, we considered the physical, behavioral, and strength factors of red foxes, which are the most common fox species in North America. Strength facts and characteristics may vary for gray or arctic foxes.

Strike forces were calculated by multiplying the top speed for each species by the top weight mentioned in the table.

14 Differences Between Fox Vs. Coyote

Foxes and coyotes belong to the same family. However, they are rather distant relatives.

While they are both Canidae, red foxes belong to the genus Vulpes (true foxes) and Vulpes vulpes species. They are further divided into 45 subspecies distributed all over the world, with the exception of some territories such as Tasmania.

Coyotes are members of the genus Canis, the same as domestic dogs, wolves, and dingoes. The species – Canis latrans – is divided into at least 19 subspecies which are all distributed across Northern and Central America.

Both red foxes and coyotes are top carnivores in some ecosystems. In shared habitats, coyotes don’t actively hunt or eat foxes but they do have the potential to kill them.

The most visible difference between red foxes and coyotes – fur color aside – is the size. Foxes are about two times smaller than coyotes, even though larger fox males can grow larger than coyote females.

On average, red foxes reach body lengths between 1.8 and 2.8 feet. Coyotes grow between 2.6 and 3 feet in length. However, some eastern coyote males can be larger, with lengths reaching 4.5 feet in some cases.

If estimating the size could be tricky from afar, the coat color can help tell whether the animal is a fox or coyote.

Red foxes have a reddish brown coat darker on the legs and tail and with white undersides. Coyotes’ predominant color is light gray and red interspersed with black and white. The legs and undersides are whitish.

Both animals have bushy tails, but the coyote tail is mostly dark gray in color whereas a red fox’s tail is a dark reddish brown.

Another crucial difference between coyotes and foxes is their height – coyotes are about eight inches taller than foxes.

On average, they reach a shoulder height of 24 inches. Red foxes, on the other hand, rarely exceed 16 inches in height.

The height difference, together with the length and fur color, can help tell the difference between the two species when spotting them in the wild.

Foxes and coyotes belong to the same family, and their skulls are very similar in shape. The most noticeable difference is the size.

The skulls of both animals have an elongated shape with a large braincase and elongated snouts.

The dental formula is also identical. Both coyotes and red foxes have 40 teeth in total, 20 on the upper jaw and 20 on the lower one.

Another similarity between foxes and coyotes is the shape and overall appearance of their droppings.

Foxes and coyotes living in urban areas may have lighter-colored droppings that can contain kitchen scrap traces.

Coyote scat can vary in length from about four to seven inches and is about 0.5 to 1-inch thick. Red fox scat is about two to three inches long and up to 0.5 inches thick.

Weight is an important asset in the animal world. The heavier an animal is, the greater the strike force it can generate.

And even if most animals use their bite to fight off an opponent, being able to make the opponent lose balance by slamming into it is a huge advantage.

With coyotes being about two times the size of red foxes, it doesn’t come as a surprise that they are also heavier.

Typically, coyotes weigh between 20 and 50 pounds. Red foxes are a lot lighter, with weights between 10 and 18 pounds.

Another unsurprising fact is the larger paws coyotes have compared to red foxes.

According to the Washington Department of Fish and Wildlife, coyotes have a paw size of about 2” by 2.5”. Red fox paws are about 1.5” by 2” in size.

However, the size is not the only factor that could help you identify canid tracks.

Most canids have oval paws with the second and third toes of their front paws pointing away from each other.

In the case of coyotes, the second and third toe are closer together; they both point forward and the claws are oriented toward each other.

This trait makes it easy to tell coyote tracks apart from red foxes, but also wolves and dogs.

Another point in favor of coyotes is the speed: these canids can reach sprinting speeds up to 43 miles per hour.

Red foxes can run at a max of 30 miles per hour, and only for short distances. Their normal running speed is even slower.

Similar to foxes, coyotes can only run at top speed for short distances. However, they are still faster than foxes even when running at normal speed.

While the strike force in mammals is seldom measured, this value is easy to calculate by multiplying the speed by weight.

According to these factors, the strike force can be different each time the animal strikes. However, for comparison purposes, we considered the top speed of each species and the top weight coyotes and foxes can reach.

Based on these values, foxes can strike with a force up to 540 lb.-ft./s which is the equivalent of about 16.7 pounds of force.

However, coyotes can strike with up to 2,150 lb.-ft./s, or 66.8 pounds of force. This makes coyotes four times stronger than red foxes.

Coyotes, much like red foxes and other canids, are not considered good climbers. However, they can jump – even if their jumping performance is inferior to that of foxes.

In fact, coyotes can jump about three feet up. Despite their smaller size, red foxes can easily jump over obstacles standing up to six feet tall.

While this is the only point in favor of foxes, it might be just what they need to get to safety if they can jump over a fence or up a tree where coyotes can’t reach them.

Climbing-wise, it should also be said that even though they are not considered good climbers, both red foxes and coyotes can climb trees as long as they can reach branches with a smoother incline and that don’t require the use of claws to grip onto the bark.

As explained, red foxes are better jumpers and climbers than coyotes. Their advantages end there, though.

As far as bite force is concerned, coyotes are stronger than foxes. In fact, they can exert a bite force of about 727 PSI. A red fox’s bite is about two times weaker, of only 307 PSI.

Both mammals have bites strong enough to kill prey and tear the flesh off bones. To put things into perspective, humans have a bite force of only 162 PSI.

If it would come to a fight between the two canid species, though, coyotes would have a clear advantage.

Despite this, an interesting fact to observe is that red foxes actually have stronger jaws than coyotes when measured pound-per-pound.

The bite force quotient (BFQ) is a measurement scientists use to estimate the bite force of various animals based on their body mass.

In a study on bite forces of various species of mammals, scientists found that red foxes have a BFQ of 90, whereas that of coyotes is only 88.

Foxes may have a higher bite force quotient than coyotes, and they might be more agile climbers, however, that might not be enough when it comes to a fight.

If strength is in numbers, coyotes have all the odds in their favor.

In fact, while they have a solitary behavior when foraging, coyotes are actually social animals that live in packs.

Packs typically consist of family units – coyotes are monogamous – but unrelated coyotes could sometimes be accepted in a pack. Despite their social structure, coyotes are not known to defend their territory except for the denning season.

Unlike coyotes, red foxes are solitary animals. Females can sometimes live in groups, but this usually happens if they are all mated to the same male.

In fact, female red foxes are typically monogamous. Most males are monogamous too, but some may also seek other partners.

Apart from these circumstances, groups are mostly formed by females and their dependent or unmated offspring.

Coyotes and red foxes are considered omnivores, even though their primary diet consists of meat, and they can compete for resources.

Red foxes usually go after small prey, such as rodents, rabbits, and even birds and reptiles. They also eat insects and arthropods.

Foxes also eat eggs, fruits, berries, and other plant materials. When living near human settlements, they could also take advantage of kitchen refuse.

Coyotes have similar preferences. They go after small mammals, reptiles, insects, and other invertebrates.

As opportunistic mammals, coyotes take advantage of the proximity to human settlements and food scraps. Sometimes, coyotes may also hunt together and take down large prey.

Both coyotes and foxes also feed on carcasses and carrion, when they come across them.

Red foxes are a common and invasive species present in most regions across the globe. The species is native to Eurasia and North America, but it is now found in the southern hemisphere as well.

For instance, red foxes introduced in Australia became an invasive species that is now found in all Australian territories, except for Tasmania. They are also found in South America in countries including Chile and Argentina.

Coyotes are only found in North and Central America, their geographic range spanning from Canada all the way south to Mexico.

Like red foxes, coyotes are considered an invasive species that is known to have expanded its original range over the years.

Red foxes prefer semi-open areas, such as the edge of forests and brushlands. They also inhabit prairies, grasslands, and urban and rural areas.

As one can imagine, it is common for coyotes and red foxes in North and Central America to share the same habitat.

Coyotes are larger and stronger than foxes, and when these two species come together in the wild, the former is considered the apex predator.

Yet, coyotes don’t actively hunt foxes. They typically tolerate them, unless a fox comes too close to a coyote’s food. In this case, coyotes are known to kill foxes.

Considering the size and strength differences, as well as the fact that coyotes sometimes hunt and eat in packs, a red fox has no chance of winning the fight. Its only chance would be to get to safety by jumping over a fence tall enough to deter the coyote.