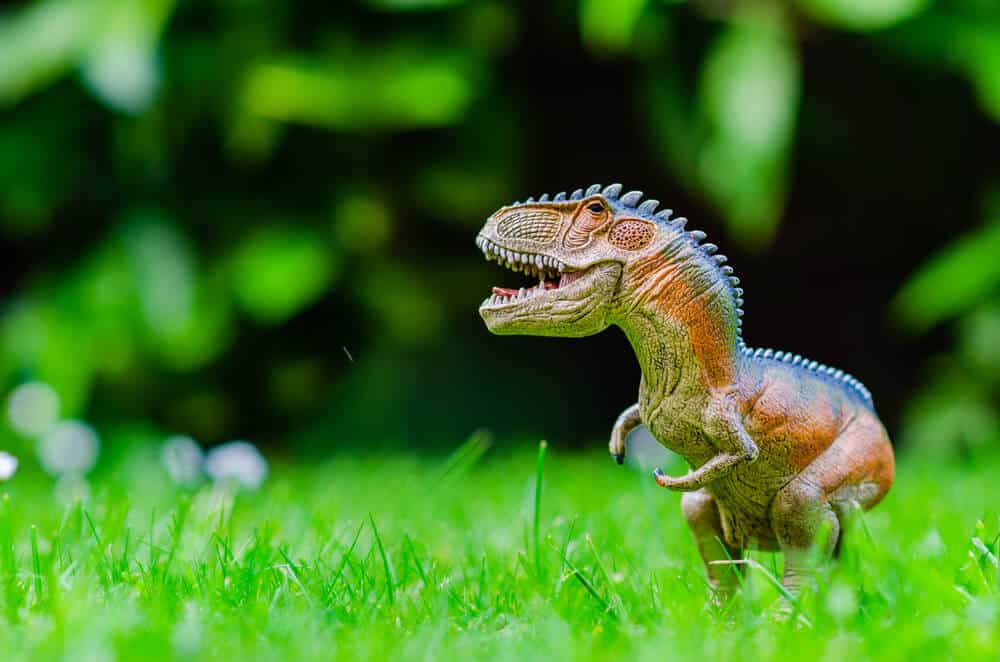 Giganotosaurus and tyrannosaurus rex were some of the largest creatures to ever roam the Earth.

They never had a chance of meeting in real life – giganotosaurus preceded t-rex by about 30 million years – but these species were at some point the biggest reptiles in the Americas.

This makes us wonder, in a Jurassic World setting, who would win a fight?

Giganotosaurus was bigger and heavier than t-rex. This lizard grew up to 46 feet in length and weighed around 14 tons. It was also faster than t-rex, reaching speeds up to 31 miles per hour, and a lot stronger. However, the t-rex had a stronger bite and a bigger brain. Despite its smaller size, the “king of dinosaurs” would likely win the fight.

The table below shows a size comparison and differences between t-rex vs. giganotosaurus*:

*Data in the table was sourced from scientific and research papers, journals, nature magazines, almanacs, and other official sources. Due to limited data or research, some of these figures are estimates. Strike forces were calculated by multiplying the top speed by the top weight (in pounds) mentioned for each species.

15 Differences Between Giganotosaurus Vs. T-Rex

The first thing to check when comparing fighters in combat sports is their size – which often predicts the probability to win the fight.

When comparing giganotosaurus and t-rex, the former has all odds by its side. In fact, giganotosaurus was larger than t-rex, measuring between 44 to 46 feet in length.

Not only was this reptile long, but it was also tall. According to archaeologists, giganotosaurus could have grown up to 18 feet tall.

T-rex was by no means small; after all, this species is dubbed as the “king of dinosaurs.” However, it only measured between 36 to 40 feet in length and grew up to 12 feet tall.

This difference would give the giganotosaurus an advantage in a fight.

While the size of giganotosaurus and t-rex was easy to calculate based on skeletal findings, estimating the weight of these animals is somewhat trickier.

Generally, it is accepted that giganotosaurus was larger and heavier than t-rex, with an estimated weight for the biggest individuals of about 10 to 14 tons.

T-rex dinosaurs were about two times lighter, with weights ranging from 5.5 to 8 tons on average.

However, while numerous studies confirmed the estimated weight of the t-rex, this is not the case for giganotosaurus.

In fact, archaeologists have yet to find a complete skeleton of this behemoth, and without one, muscle reconstruction is hard to achieve.

This gave rise to debates, with some experts claiming that even if the giganotosaurus was bigger, this reptile had a leaner body and a lower mass.

Some even believe that the actual weight was closer to that of the t-rex – around 7 to 8 tons.

A similarity between giganotosaurus and t-rex was the locomotion type. Both dinosaurs belonged to a group of upright walking reptiles called theropods.

In fact, appearance-wise, the giganotosaurus and tyrannosaurus rex were very similar.

Both dinosaurs had muscular legs and stocky bodies (despite some claims that giganotosaurus was leaner than t-rex).

The front limbs in both species were short but powerful. Their role is not yet fully known, but some scientists claim they could have been used as weapons.

A difference between the two species is the presence of three fingers on the giganotosaurus front limbs as opposed to only two fingers in the t-rex. 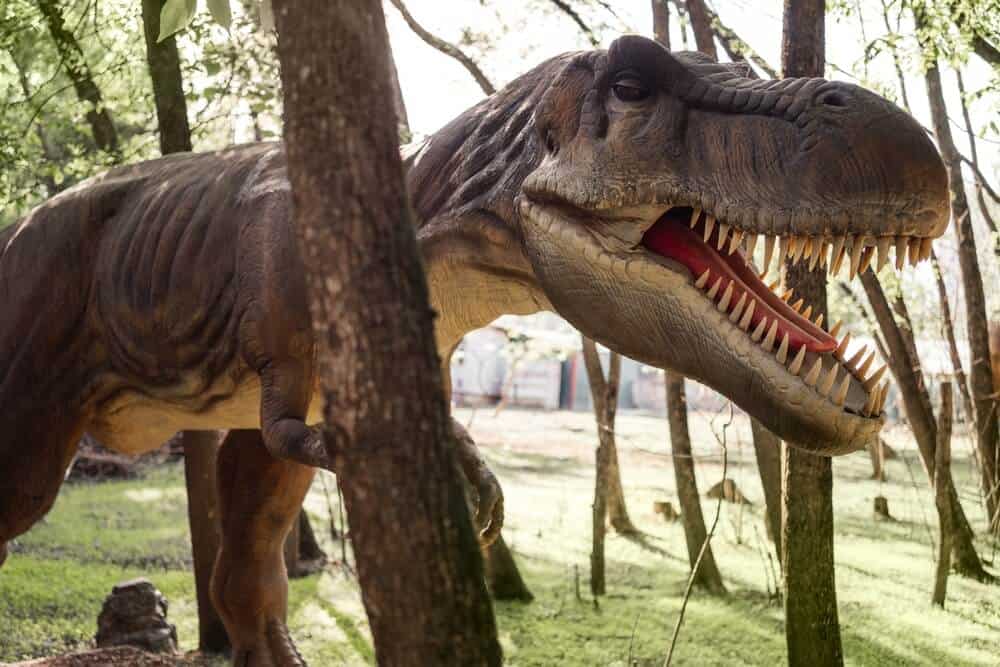 Another similarity between the two species is the shape of their hind feet and, consequently, the footprint shape.

Both giganotosaurus and t-rex had strong hind limbs that ended with three-toed, bird-like legs.

Surprisingly, though, despite the smaller size of the t-rex, the king of dinosaurs actually had larger feet than the giganotosaurus.

Based on field evidence, t-rex footprints vary in size from about 2.5 to 2.6 feet in length.

Meanwhile, measurements of theropod dinosaur footprints in South America (where giganotosaurus lived) revealed that species in the southern hemisphere left prints about 1.67 to 2.13 feet long.

Giganotosaurus were larger than t-rex and probably heavier. But even if their body mass might not be fully estimated yet, a clear thing is that they were fast.

Apparently, these behemoths could sprint at speeds slightly over 31 miles per hour. This is over two times the speed of a t-rex, which was only about 12 miles per hour.

Considering the size difference between these two dinosaur types, it doesn’t come as a surprise that giganotosaurus had a larger skull compared to the t-rex. This giant lizard had a skull of about 5.5 feet in length.

The surprising fact is the minimal size difference compared to the t-rex skull, which was about 5 feet long.

Since dinosaurs have gone extinct millions of years ago, it can be challenging to predict the actual brain size and intelligence in these species.

However, based on the skull size and theories that suggest giganotosaurus had a small brain, most experts assume that t-rex were actually more intelligent than giganotosaurus.

Most terrestrial carnivores alive today are mammals, and they are easily recognized by their long and sharp canine teeth.

However, dinosaurs were giant lizards and had a different denture type, similar to that of crocodiles and other reptiles. This doesn’t mean they didn’t have sharp or long teeth, though.

In fact, giganotosaurus had around 76 teeth, all of them conical in shape and with serrated edges similar to steak knives. These edges enabled the dinosaur to tear flesh off bones easily. Moreover, their strong jaws also enabled them to crush bone.

The actual length of their teeth was around eight inches.

T-rex had a smaller skull and shorter jaws than giganotosaurus. These dinosaurs had around 60 robust teeth, slightly curved and with reinforced ridges. Similar to giganotosaurus, t-rex had serrated edges on the six-inch long teeth.

As explained, t-rex had robust teeth shaped for the easy crushing of bones. However, their teeth were likely so robust to withstand the impressive bite force their jaws could exert.

A study comparing the bite forces of various extinct dinosaur species revealed that tyrannosaurus rex had the strongest bite – up to 48,505 N.

The actual bite force of giganotosaurus was never estimated.

Yet, scientists revealed that giganotosaurus was a close relative of Carcharodontosaurus saharicus, and the same study mentioned above estimated the bite force of this dinosaur.

Assuming that the two species – which were similar in size – had similar bite forces, we can say that giganotosaurus mustered a bite up to 25,449 N.

This makes t-rex about two times stronger than giganotosaurus.

The strike force is another crucial asset in a clash, enabling a fighter to take down their opponent.

Based on strike force alone, the giganotosaurus would easily win a fight against a t-rex. Thanks to the greater body mass and faster speed, this dinosaur could have developed an impact force of up to 868,000 pounds per foot-second.

By comparison, the t-rex was a lot weaker. Running up to 12 miles per hour and weighing up to eight tons, the king of dinosaurs could only develop an impact force of about 186,000 pounds per foot-second.

Hence, the giganotosaurus was about 4.6 times stronger than the t-rex.

Belonging to the same group of extinct reptiles, giganotosaurus and t-rex are part of the same biological kingdom, phylum, class, superorder, order, and suborder.

However, the similarities end here, as the two dinosaur types belong to different families.

Giganotosaurus was part of the Carnosauria infraorder, Allosauroidea superfamily, and Carcharodontosauridae family. This family includes the Carcharodontosaurus saharicus dinosaur native to Africa.

Giganotosaurus carolinii (giganotosaurus) is the only species in its subfamily and genus.

For a long time, Tyrannosaurus rex (t-rex) was also believed to have been the only species in its genus and subfamily (Tyrannosaurinae).

According to a study, t-rex evolved from Tyrannosaurus imperator and it might have coexisted with the other two species for a period of time. 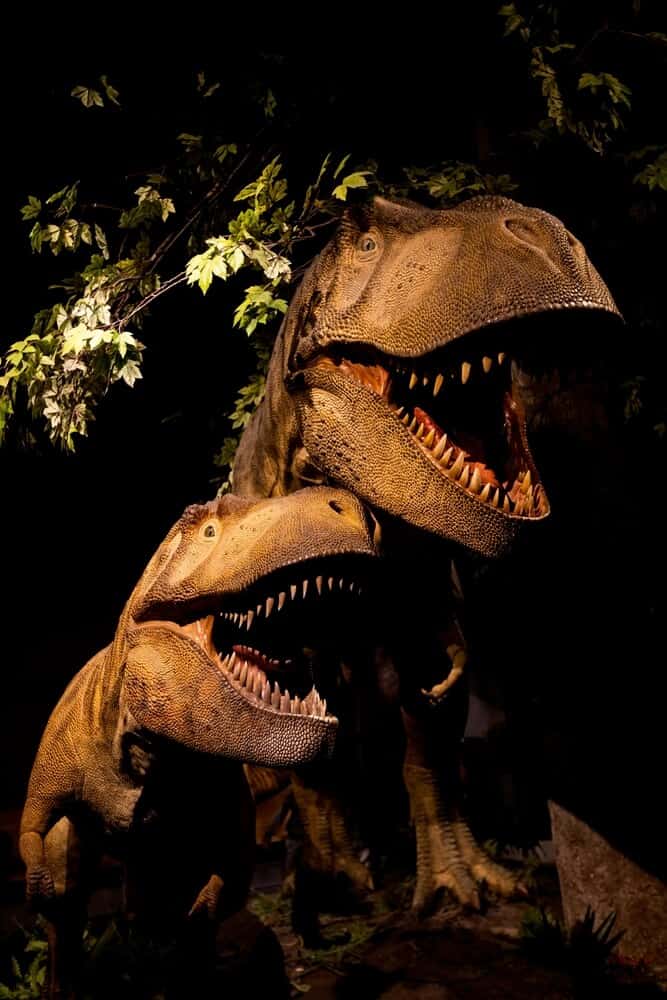 Giganotosaurus and t-rex were two dinosaur species native to the Americas, but each lived in its own hemisphere.

Giganotosaurus was native to South America. Its primary range was Argentina, but it also inhabited parts of Chile and Peru.

Based on the areas where fossils were found, archaeologists assume that giganotosaurus mostly inhabited plains and woodlands.

However, evidence of giganotosaurus is scarce and the reptile might have actually lived in more diverse ecosystems.

T-rex fossils are more abundant than giganotosaurus and show that they lived in a variety of ecosystems. These dinosaurs were found in most sub-tropical and semi-arid habitats, including plains and coastal areas.

Giganotosaurus and t-rex were some of the most feared apex predators on Earth. Perhaps this is why many assume they were aggressive and solitary.

Yet, evidence suggests that both species were actually social animals who lived in groups and, sometimes, hunted in packs.

As far as t-rex is concerned, scientists aren’t even sure whether this animal was primarily predator or scavenger, which means that it might have been a lot more docile than pop culture wants us to believe.

As carnivores, both giganotosaurus and t-rex fed on herbivore dinosaurs and a variety of other prehistoric animals. Due to their large size, both dinosaurs were likely apex predators in their geographic range.

Aside from hunting and killing their own prey, t-rex and giganotosaurus alike were also believed to be scavengers.

Similar to the spinosaurus, t-rex and giganotosaurus lived in the same geological period. Yet, this doesn’t mean that they occurred at the same time.

Giganotosaurus lived around 120 to 96 million years ago, in the Early Cretaceous (more or less at the same time as spinosaurus).

Giganotosaurus and t-rex had no chance of coming across one another in the wild. Not only did they live in different parts of the world, but the former became extinct long before the first t-rex was born.

Yet, if scientists were to revive dinosaurs and introduce them to the same habitat, t-rex would likely win the fight.

Despite its smaller stature, lighter body, and slower movement, t-rex had very powerful jaws that could have killed its opponent with a single well-placed bite.

Moreover, the larger brain volume suggests a higher intelligence compared to giganotosaurus. This would have enabled the t-rex to come up with better ambush and defense strategies compared to its opponent.

However, should the giganotosaurus catch the t-rex by surprise and use its strike force to take it down, the tyrannosaurus wouldn’t stand a chance.