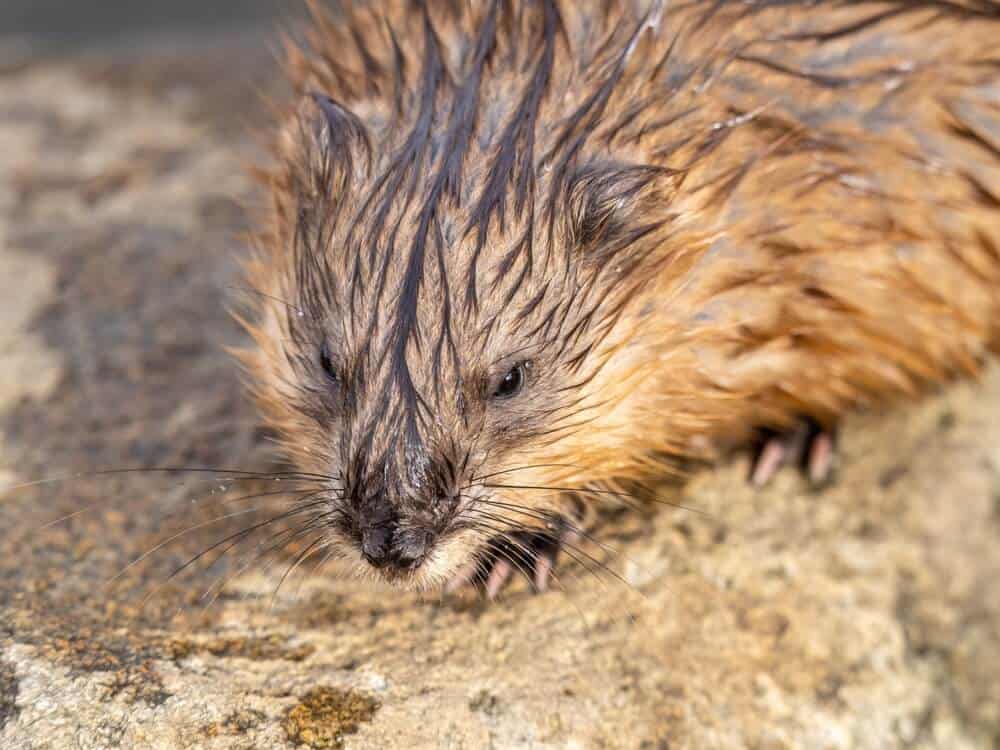 Beavers are part of the Rodentia taxonomic order, making them cousins with animals like rats, gophers, squirrels, and others.

The defining feature of the Rodentia order is their teeth. Every rodent species, including beavers, have one pair each of upper and lower incisors (long front teeth).

These grow continuously, requiring rodents to gnaw to keep them at a suitable length. Beavers’ teeth are bright orange due to a thick layer of protective enamel.

Another notable characteristic of beavers is their tails, which look almost like flat paddles. They’re very broad, long, about 10 inches (25 cm), and covered in black scales.

While their tails are hairless, the rest of a beaver’s body is not. Beavers have glossy, brownish fur that’s waterproof. Underneath the outer layer of fur is a layer of protective guard hairs.

Beavers have large teeth and glands that are common among all rodents. Animals such as gophers, rats, and groundhogs all share these features. Beavers also have thick brown fur similar to capybaras, muskrats, and nutrias. Each of the ten animals in this list has some physical aspect in common with beavers.

Pocket gophers belong to the same suborder of beavers, Castorimorpha. This makes them close cousins and explains their similar appearance.

Pocket gophers have the same long incisors as beavers. They use them to gnaw through roots as they burrow. These teeth grow every day; the upper teeth grow 0.35 mm and the lower grow 0.67 mm every day. 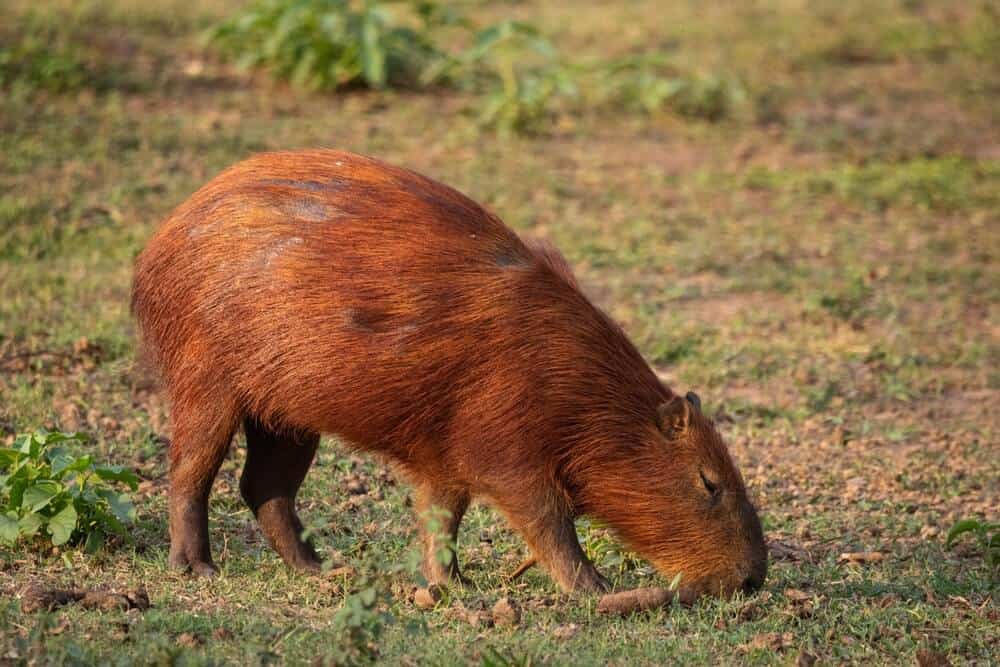 Scientific name: Hydrochoerus hydrochaeris
Quick summary: Capybaras have their ears and eyes at the top of their head like beavers for swimming.

Capybaras look like large beavers without flat tails. They belong to a suborder of Rodentia that’s separate from beavers, but they share several physical attributes.

As will all rodents, including beavers, capybaras have large incisors at the front of their mouths. They have robust bodies like beavers as well, with a humped backside.

Capybaras are semiaquatic, and their eyes are near the top of their head, like a beaver’s. Their head shape and brownish coloring are close to a beaver’s as well.

It can be hard to tell the difference between a capybara and a beaver when they’re in the water. 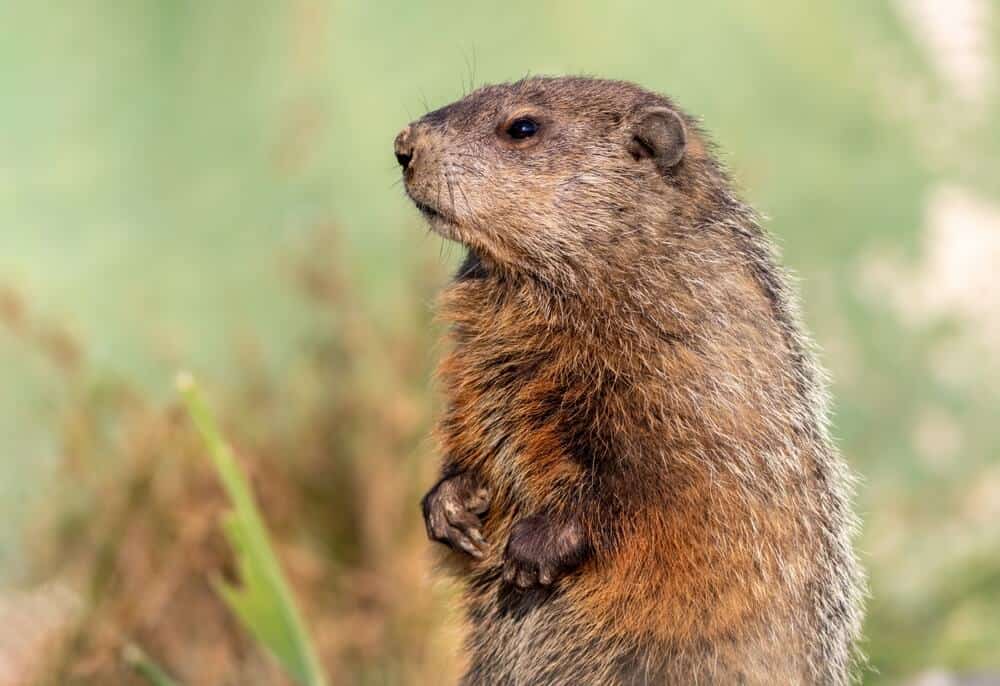 Scientific name: Marmota monax
Quick summary: The tails of groundhogs are wide like a beaver’s, but furry instead of scaly.

Groundhogs are one of the few species on this list with a tail as wide as a beaver’s. Many rodents have tails that are thin and tapering, instead of flat and broad like a beaver.

Groundhogs, or woodchucks, have much bushier tails that make up 25% of their total body length. Although a beaver’s tail is hairless, the width of a groundhog’s tail can cause confusion at a glance.

This is also due to the shape and color of a typical groundhog. Groundhogs have the same wide, stout bodies as beavers, and have thick brown fur.

They also have similar claws they use to dig holes and burrows. 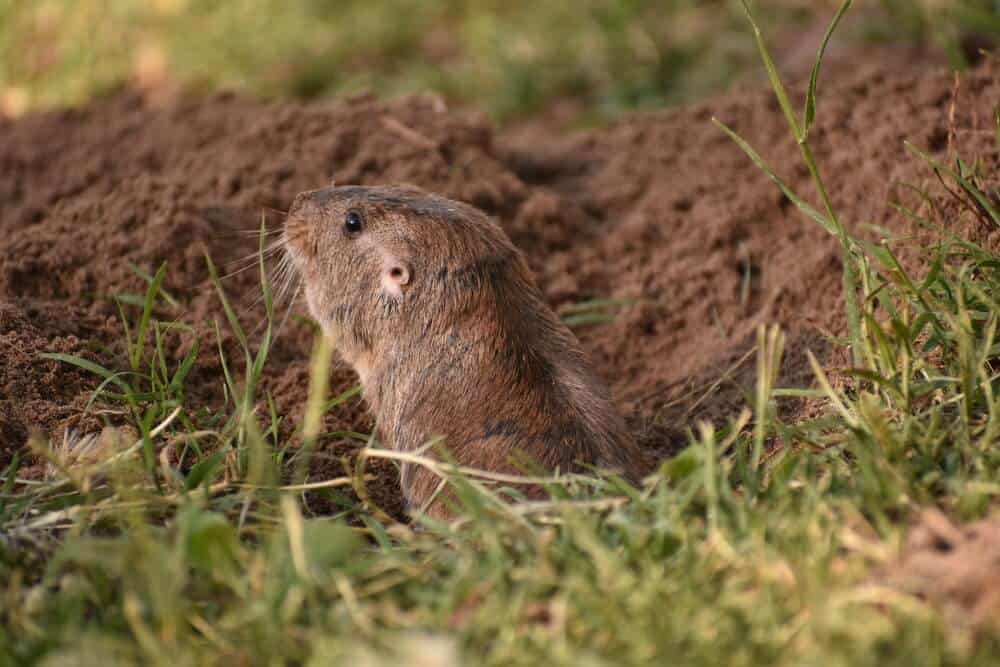 Scientific name: Ctenomys conoveri
Quick summary: This species of tuco-tuco has the same bright orange enamel on its teeth as beavers.

Conover’s tuco-tucos are smaller than the average beaver, only weighing about two pounds. However, they have the same proportionally large teeth and brown fur as beavers.

Their teeth have the same thick layer of bright orange enamel as a beaver’s teeth. Finally, they have similar whiskers to a beaver and their feet have the same long, sharp claws at the end. 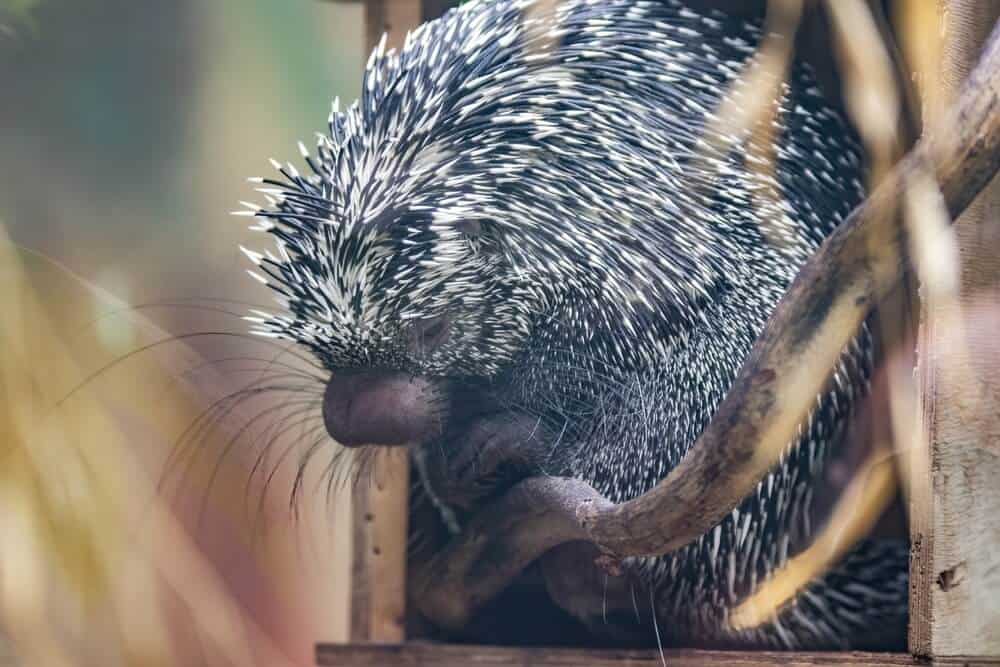 Scientific name: Coendou rufescens
Quick summary: This porcupine’s spines are darker than other species and give them a more beaver-like look.

Despite their short tails, the stump-tailed porcupine looks like a small beaver. In the water, a beaver’s fur looks glossy, but as it dries, it sticks out in little spikes.

These fur spikes can look like the quills of a porcupine, especially on the back. Stump-tailed porcupines have reddish-brown fur, which also makes their quills appear darker.

Also, when they walk, these porcupines have a hunch at the back. This makes their backsides appear higher than their fronts as they walk, just like a beaver. 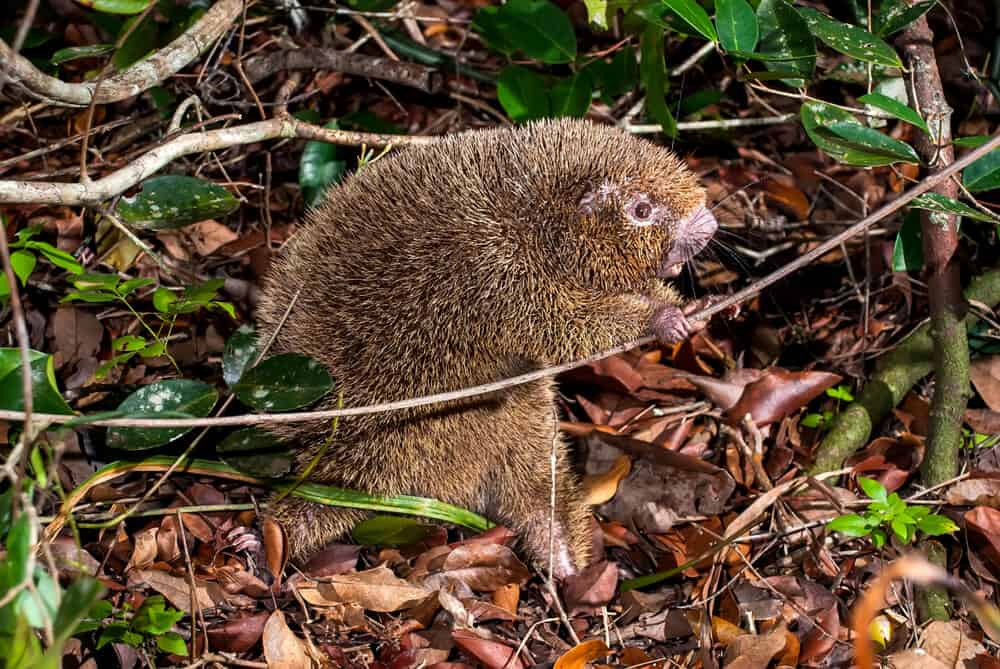 Scientific name: Chaetomys subspinosus
Quick summary: The brown bristles on these rats look like the spiky fur of beavers.

The bristle-spined rat is actually a type of porcupine, and it looks much closer to a beaver than a rat.

These porcupines also have very similar noses to beavers. They’re very round and a different color from the rest of their face, making them more noticeable. Beavers also have large, round snouts that are black instead of brown.

Bristle-spined rats also have similarly brown fur as well as scaly tails. However, they tend to be a lighter color than beavers and their scaly tails are thin instead of wide. 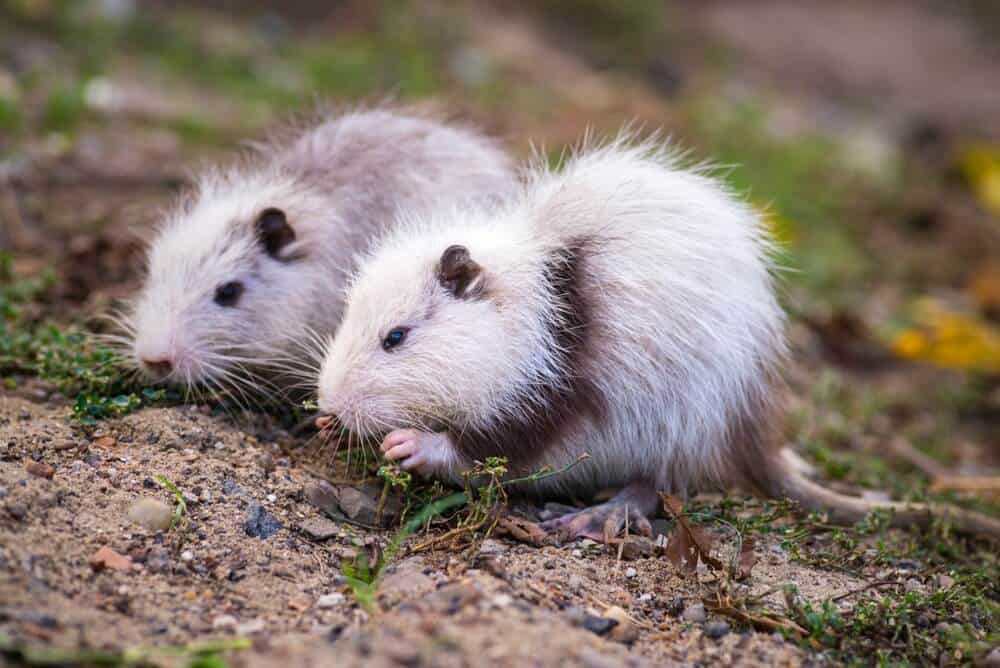 Also known as coypus, nutrias are part of the Myocastoridae family. This family is in a different suborder than beavers, but the two animals look very similar.

Because they’re semiaquatic mammals like beavers, nutrias have the same layers of fur.

The top layer is typically the same reddish-brown as beaver fur. They also have a layer of coarse guard hairs to protect them in the water.

Nutrias have bright orange teeth like a beaver, as well as webbed feet and claws. Their faces have a similar shape as well, with blunt noses and long whiskers.

Muskrats may be closer to actual rats than beavers, but they look a lot more like the latter. They are mid-sized rodents, weighing up to four pounds.

They’re smaller than beavers but have similarly large heads in proportion to their bodies.

Just like beavers, muskrats have thick coats of fur that offer insulation in the water. They also have similar coloring to beavers with dark brown, glossy fur.

Also, like beavers, muskrats have webbed feet that help them swim. 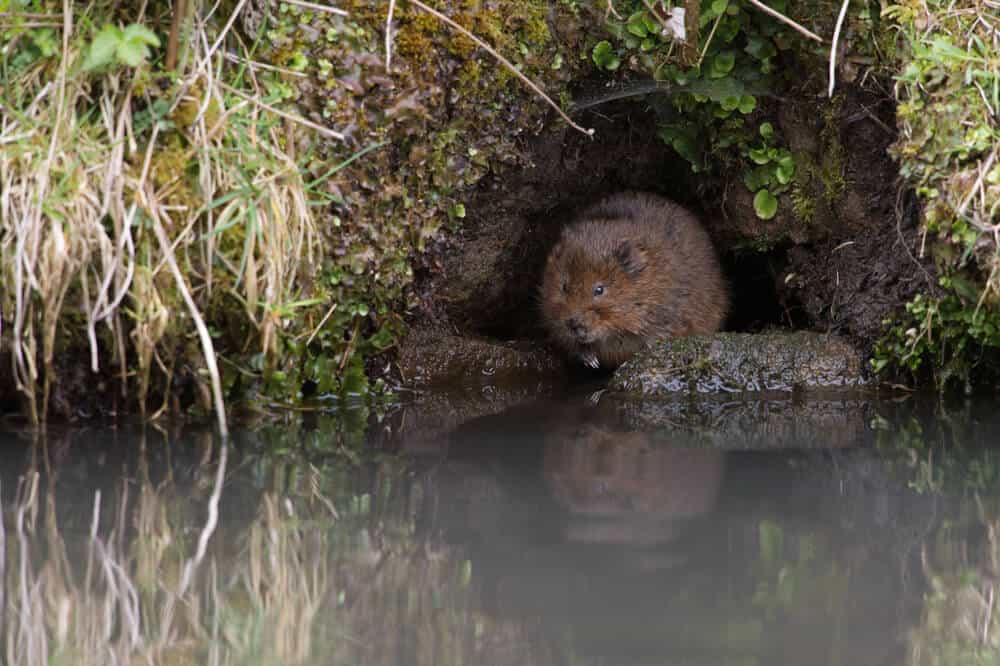 Scientific name: Arvicola amphibious
Quick summary: Water voles are smaller than beavers but have the same round body and flat ears.

Water voles could be mistaken for very small beavers at a quick glance. They have the same kind of round, stout body as beavers.

Their fur is also brownish, and they have small, round ears flat on the side of their heads like beavers.

They also inhabit areas near water and often sit right on the edge of the water. Beavers also live in water habitats, and the two have similar rounded noses. 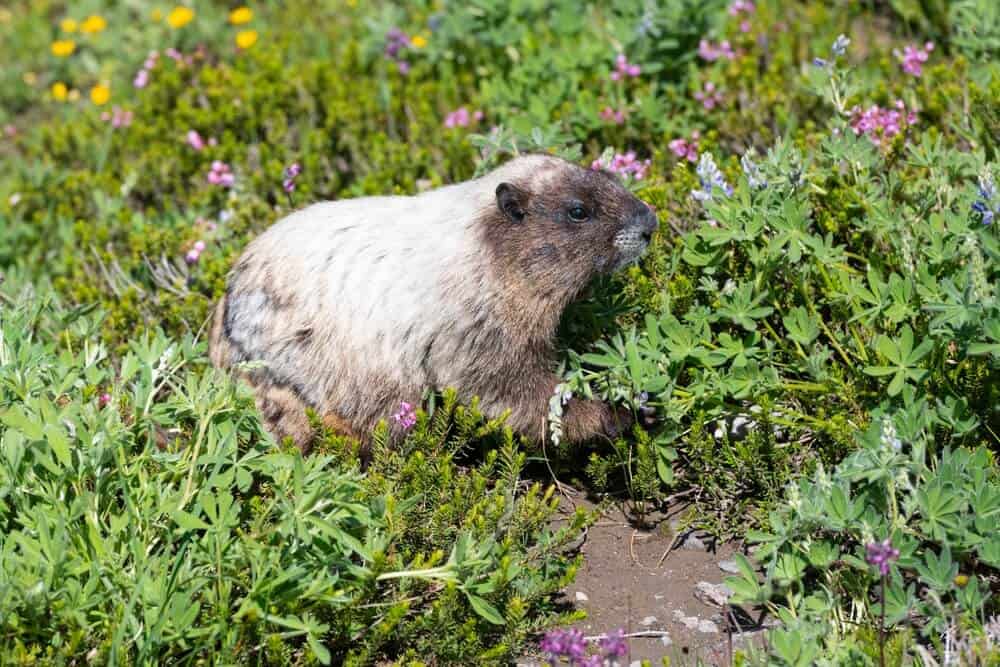 Scientific name: Marmota caligata
Quick summary: Hoary marmots are about the same size as small beavers and have similar teeth and noses.

The hoary marmot is the largest American marmot, which puts it close to beavers in size. A large marmot can weigh up to 30 pounds, which is about the size of a small beaver.

These marmots also have round, blunt noses like beavers, as well as large incisors. Although they are a hoary whitish color in the winter, their coat changes with the seasons.

In the summer, a hoary marmot is much closer to the brown color of a beaver.

Because beavers are some of the largest rodents in their family, they are usually easy to distinguish from other animals. However, they also have several features which other rodents also have, which can make them harder to distinguish.

Beavers have very large front teeth to help them gnaw through wood. All members of the Rodentia family have these kinds of teeth.

Beavers also have thick brown fur which is very common among their animal cousins. There are also a few rodents, such as muskrats and nutrias, who have webbed feet like beavers for swimming.