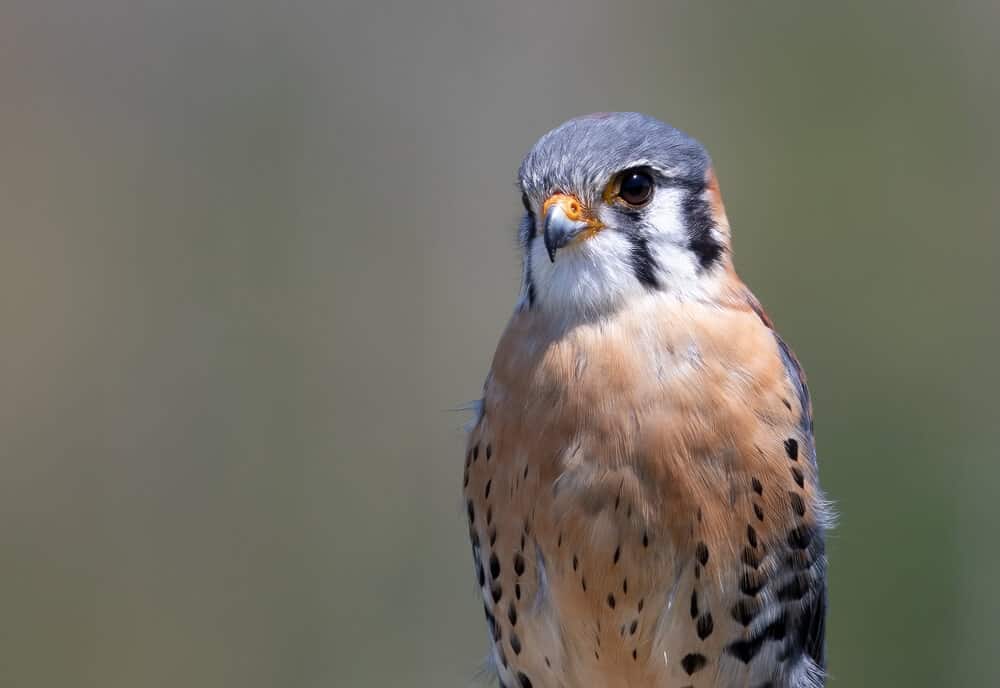 The American kestrel (​​Falco sparverius) is commonly found in North America. This small, compact falcon exhibits several behaviors and features that are unlike other birds of prey.

This fierce little predator is a colorful and graceful aerial acrobat and is the only raptor that can hover mid-air.

They bob their heads and pump their tails to maintain balance and search for prey from perched locations.

Male and female kestrels form a monogamous unit as they raise their young year after year.

They are popular amongst falconers and bird-watchers alike for a variety of reasons.

Here are 18 interesting facts about the American Kestrel: 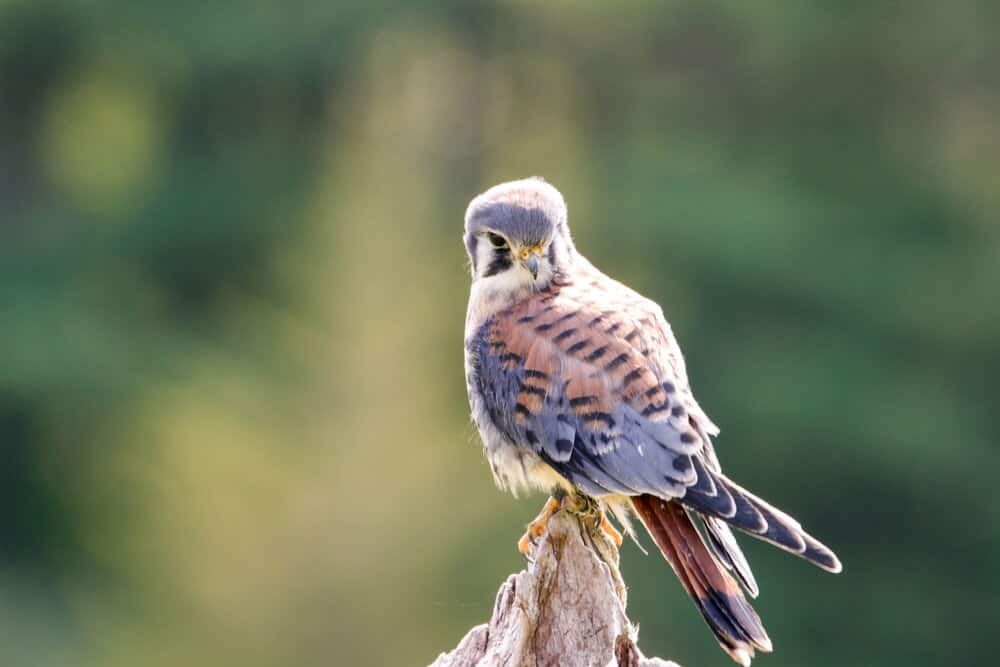 American kestrels may give the impression that they are dancing when perched upon something by tail-pumping and head-bobbing.

They typically pump their tails to balance themselves when landing on perches and while consuming prey. They also bob their heads when scoping out prey at extended distances.

Kestrels commonly perch on areas that are high enough to scan over a large area, such as utility poles. It may move from perch to preach to find optimal spots.

2. They Are The Only Raptor That Can Hover

Kestrels are aerial artists and the only raptor that can hover. Hovering takes considerably more energy to perform and is therefore done when the kestrel cannot perch in an adequate viewing area.

In addition to scanning for prey from a perch, they can hover mid-flight, also referred to as “kiting”.

By facing a headwind the kestrel can flap its wings and maneuver its tail to hover like a hummingbird in place.

However, it has been found that they can also hover without strong winds, mastering the art of delicate balance and manipulation of their wings.

As it hovers, it will scan for prey and shift its body to accurately dive down and snatch it.

It may kill and consume prey directly on the ground, using its curved beak and talons, or carry it back to its perch.

During the breeding season, males claim and maintain territory by climbing and diving repeatedly, while making a “klee” series of sounds at the top of their ascent.

3. They Can See Ultraviolet Light & Have Keen Eyesight

Most diurnal birds, such as kestrels, can see ultraviolet light. This ability allows the American kestrel to detect urine markings and trails left behind by prey, such as voles.

They can detect these bright colors as they perch and head-bob or hover scanning over areas.

Their keen eyesight allows them to see even in low light and poor conditions, permitting them to effectively spot prey.

American kestrels are carnivorous, eating a diet of worms, sparrows, insects, mice, voles, lizards, snakes, and bats. Larger prey, such as voles are typically taken back to the perch or consumed, or cached for a future meal.

Voles, in particular, are commonly consumed by American kestrels. They eat approximately 4 to 8 voles daily.

Falcons, such as the American kestrel, primarily get hydration from their food sources. However, they may bathe in water if it is in a safe location.

The American Kestrel is the smallest of the falcon species in North America. Globally, it is the second smallest bird of prey.

These small falcons weigh about the same as 34 pennies.

Females are slightly bigger than males, similar in size to a blue jay or mourning dove.

Even though they are birds of prey, kestrels’ small size makes them potential prey to other birds such as red-tailed hawks, barn owls, American crows, fire ants, and rat snakes.

American kestrels are 1 of 3 birds of prey species in North America that differ in color from their female counterparts.

Typically, both sexes of birds of prey have subdued colors of feathers of browns, black, white, grays, and rust-like shades. As compared to other raptors, male American kestrels are more colorful, making them easier for birders to spot.

Males have rust-colored and black-barred back feathers, with slate-blue wings and heads. They have 2 black slashes amongst white on the face and a lighter rust-colored belly.

Females are more subdued with an overall rusty appearance with a lighter belly, and black-barred wings and back feathers. They have 2 black slashes on their faces and gray and rust-colored crowns.

The black slashes on the face, called malar stripes, are thought to confuse predators, thus deterring them.

They also have “ocelli”, 2 additional black spots, on the back of their necks. These resemble false eyes to scare away other predators.

Some theorize that these “eyes” help strengthen the bond between monogamous pairs.

When the breeding season starts, males choose a nesting site. Kestrels will then court each other with vocalizations, aerial displays, and exchange food as gifts to each other.

As they seek a mate, groups of 4 or 5 birds congregate during this time, and a female will determine if the nesting site and mate are suitable. They then form a monogamous pair-bond, often staying together for years.

American kestrels will migrate from northern portions more so than those breeding further south. If they do not migrate, then they remain at the nesting site.

Otherwise, they return to the same nesting sites in the following consecutive years for the next breeding season.

7. Kestrels Do Not Build Nests 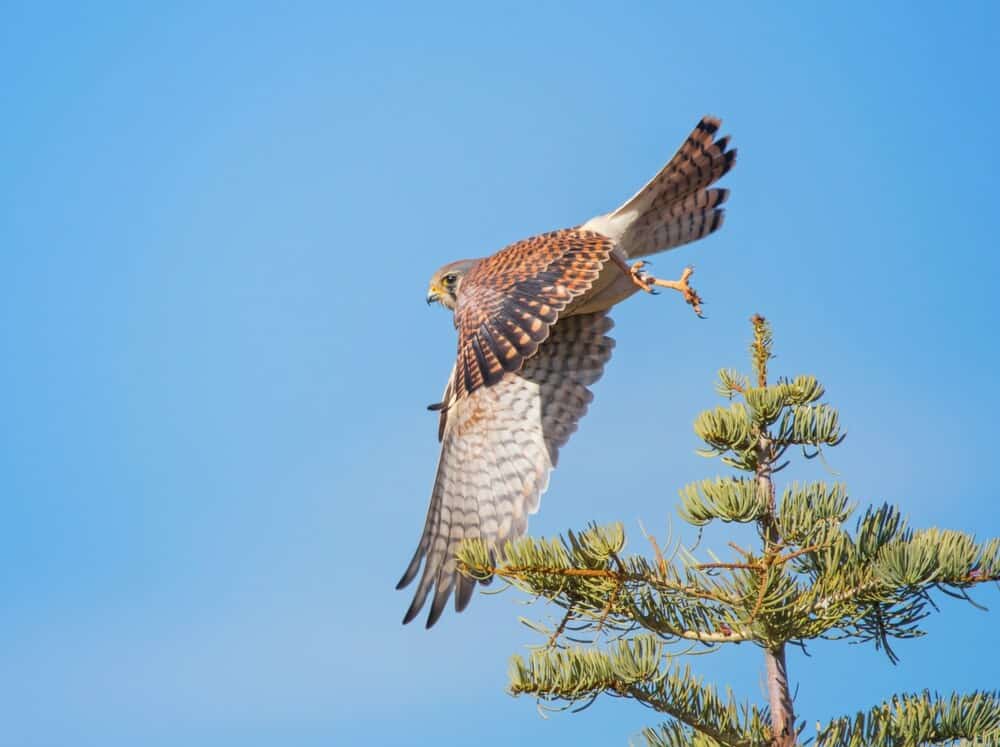 As previously mentioned, the male picks out nesting sites and the female determines if it is suitable. However, these nesting sites are typically cavities, or holes, that they find and claim.

They will also chase out bluebirds and squirrels for nesting sites. Kestrels will also use nest boxes in people’s yards.

Kestrels generally choose nesting sites along the edges of woods or out in the open ground.

If the chosen cavity has loose material in it, the female will hollow out a shallow depression to hold the eggs.

8. They Squirt Feces In Their Nesting Cavities

Kestrels do not maintain a neat nest like other birds.

They defecate directly onto the walls of their nesting cavity. The feces dry on the wall but stay off the eggs and nestlings.

Kestrels also leave scraps of prey within the cavity, making it an odoriferous site.

9. The Male Helps Incubate And Feed Its Family

The female lays her eggs over 2 to 3 days. While the female is the primary incubator, the male will incubate them as well over the next 30 or so days.

During the incubation period, the male will bring food to his mate, and continues to do so after the eggs hatch.

Once born, the hatchlings rely on their parents for food and to learn hunting skills for about 30 more days. Often they will hunt as a family or with other juveniles for a few more weeks.

Chicks need to eat twice as much as adults, as compared to their body size. A major cause of death for young kestrels is starvation, so they must learn how to capture prey. 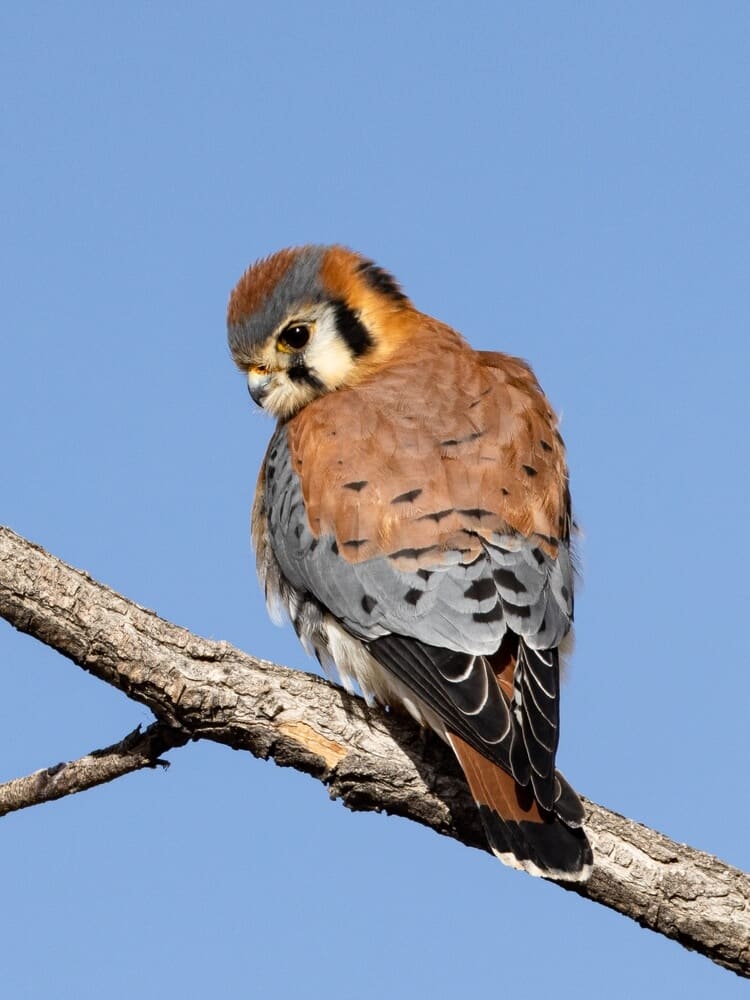 American kestrels cache, or store, food away for future consumption. Caches may be in clumps of grass, bushes, cavities, tree roots, and more.

This ensures that they have food sources during food scarcity and when raising their young. Kestrels rely on their own caches rather than carrion.

Typically, caching is done by birds and other predators during the fall and winter, yet kestrels will do it year-round.

On average, female American kestrels lay 4 to 7 pale-colored eggs over 2 to 3 days.

Voles are a main staple in the diet of American kestrels during the winter season leading to the breeding season, when other food sources are in low supply.

The population of voles in a kestrel’s territory directly impacts how many eggs are laid. If voles are hard to be found, then kestrels may not lay any eggs.

Conversely, when voles are in ample supply, the kestrel lays more eggs and has more fledglings.

These birds can fly up to 39 miles per hour (mph).

Voles, one of their preferred foods, scurry less than 10 mph. The fast speed of the kestrel allows it to effectively hone in on and capture prey. 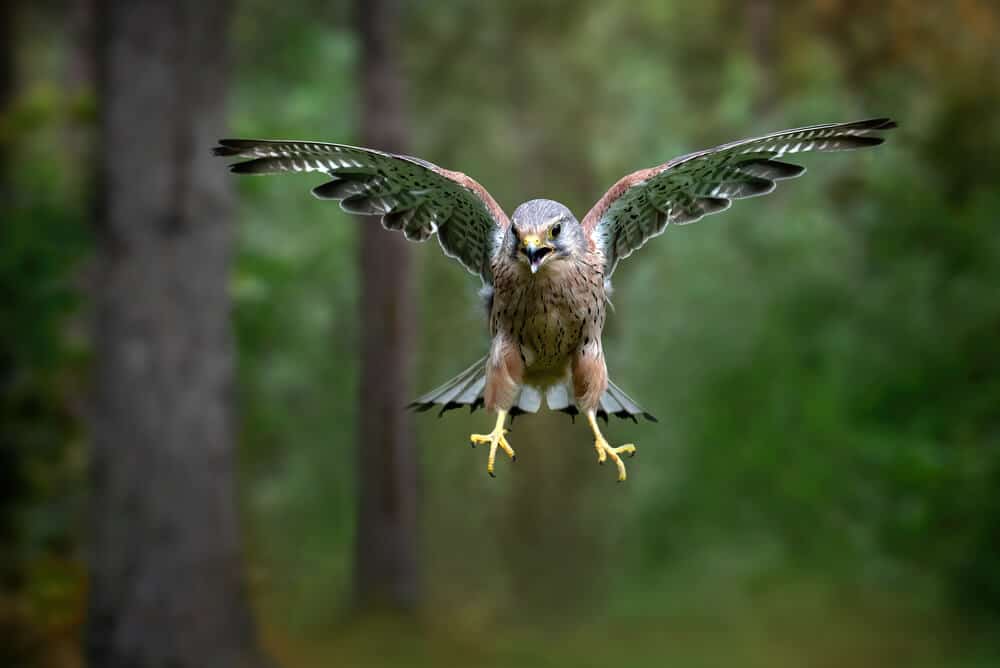 The call of the American kestrel is distinctive, and can be heard year-round, and increasingly so in the breeding season.

The sound of a kestrel is heard as a “klee”, “killy, killy”, or rapid and rhythmic chittering sounds. A long series of vocalizations can last from 1 to 2 minutes.

Kestrels produce sounds to court mates, feed fledglings, send out an alarm about a threat, and other social communications.

This link from the Cornell Lab in New York State offers listeners examples of their calls:

Approximately only 4 out of 10 of the kestrel’s offspring survive the first year. One reason is due to inadequate food sources and starvation.

Young kestrels hunt with their parents to learn skills before leaving the nest to help ensure their survival.

Declines are likely to occur due to other threats to kestrels that affect their reproductive cycles and access to healthy food sources.

These include habitat destruction due to land development and the felling of trees, pollutants and pesticides, predation, viruses, and collision with vehicles.

If fledglings survive the first year, they typically have a life expectancy of 5 years in the wild, and up to 17 years in captivity.

Kestrels have shown intelligence in their avoidance of traps for conservation efforts.

Since kestrels are declining in population, scientists have been tracking them for studying their behavior, health, and migration patterns.

Interestingly, conservationists have difficulty recapturing kestrels after they have been outfitted with tracking devices.

It seems that they remember the traps, and even avoid new and different ones placed out the following year.

16. There Are 17 Subspecies of American Kestrels 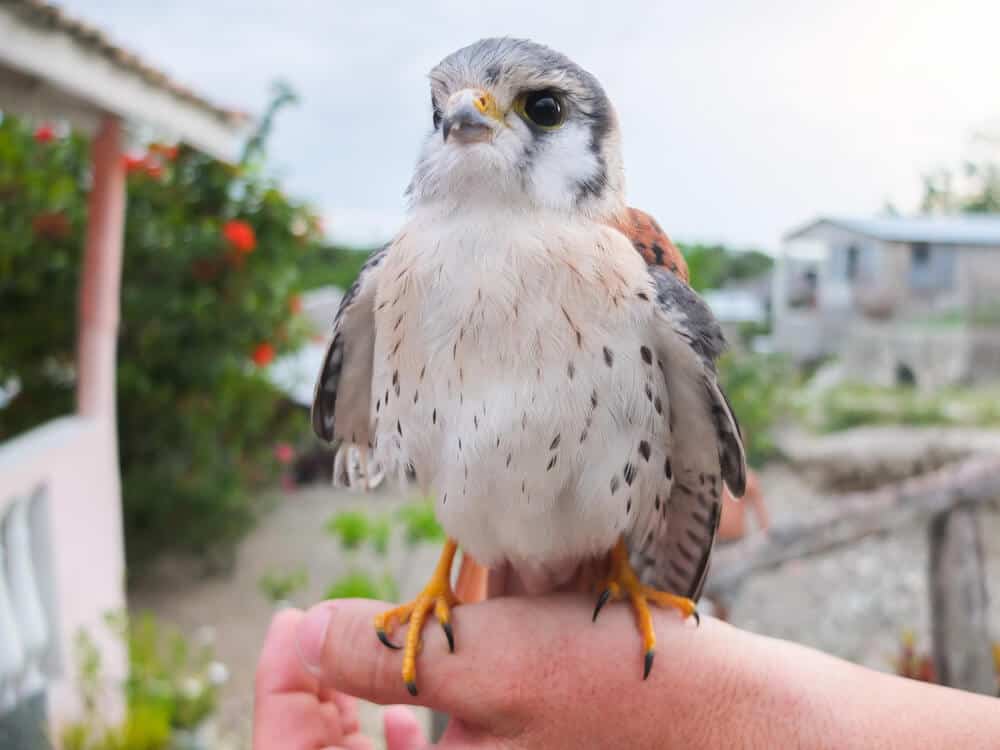 The American kestrel is throughout the western hemisphere from Alaska, through Canada, and into the southernmost parts of South America.

Subspecies of kestrel are found all over the world in places such as Europe, Africa, and Asia.

Typically, sub-species have distinctive variations in color and markings. For example, a Cuban subspecies is without facial markings.

American Kestrels can be spotted not only by their colorful plumage but perched in various parts of the country. They can be seen in farmlands, pastures, deserts, grasslands, meadows, and at coastal migration sites.

Kestrels often prefer areas with short vegetation and few trees. However, they are also seen in parks, towns, cities, and suburbs.

18. Kestrels Are Permitted To Be Used in Falconry

The American kestrel is protected by the Migratory Bird Act, keeping it safe from illegal trapping, harm, and death. However, permits may be given to those using kestrels for falconry.

They are typically used for micro-falconry to flush out other birds such as sparrows and starlings. Beginner falconers find that kestrels settle quickly with trained human interactions and have pleasant personalities.