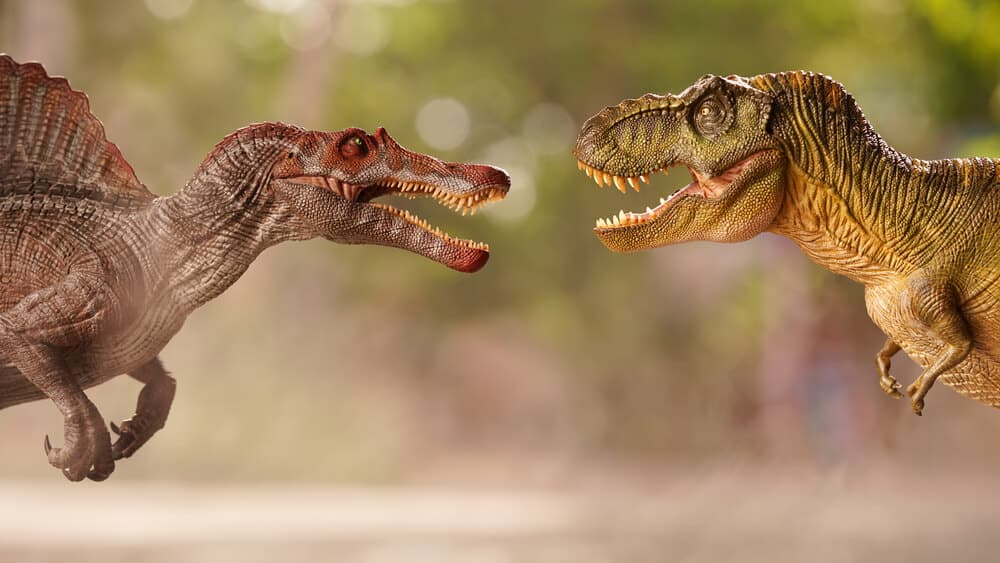 Spinosaurus and T-Rex are two of the largest dinosaur species that have ever roamed the Earth. They both lived during the Cretaceous period, but never came across one another in real life.

Yet, if the two species were to meet in a hypothetical Jurassic Park, who would win a fight?

Measuring up to 59 feet in size and weighing over 20 tons, Spinosauri were the biggest of all carnivorous dinosaurs. They could run up to 15 miles per hour and generate a force up to 690,000 pounds per foot-second. T-Rexes were smaller and slower, but they had stronger jaws and a bite force of over 10,000 pounds. Both dinosaurs would have chances to win a fight.

The comparison table below is a list of strength differences and facts between T-Rex vs. Spinosaurus*:

* Data in the table was sourced from research papers, scientific journals, studies, magazines, and other official sources. Strike forces were calculated by multiplying the top speed by the top weight (in pounds) mentioned for each dinosaur species.

15 Differences Between Spinosaurus Vs. T-Rex

If combat sports taught us something, it is that size matters in a fight. Boxers and MMA fighters are typically matched based on physical features such as weight and height.

When it comes to dinosaurs, Spinosauri would have the upper hand.

These prehistoric reptiles were the biggest of all carnivorous dinosaurs, reaching body lengths between 46 and 59 feet.

Not only did they have long bodies and strong tails, but the average height of a Spinosaurus is believed to have been between 16 and 20 feet.

T-Rexes might be known as some of the most ferocious reptiles, but they were rather tiny when compared to a Spinosaurus behemoth.

In fact, the estimated average length of a T-Rex is between 36 and 40 feet. They were also shorter than Spinosaurus, growing up to 12 feet tall.

Beyond size, weight is another factor that can make or break a deal in a fight. And considering the difference in length and height, it doesn’t come as a surprise that Spinosauri were heavier than T-Rexes.

Specifically, the average weight of a Spinosaurus is estimated between 13 and 23 tons.

However, the only bipedal dinosaur between the two is the T-Rex.

Spinosaurus dinosaurs were initially included in this genus, but recent research concluded that they were primarily quadrupedal, based on their short hind limbs and relatively long front limbs

Moreover, scientists now believe that these dinosaurs used their strong tails as the primary mode of aquatic locomotion, concluding that they were actually semi-aquatic.

Meanwhile, T-Rexes were primarily terrestrial and walked on two legs. In fact, it is uncertain what was the role of their short front limbs – but some theories suggest they might have been vicious weapons. 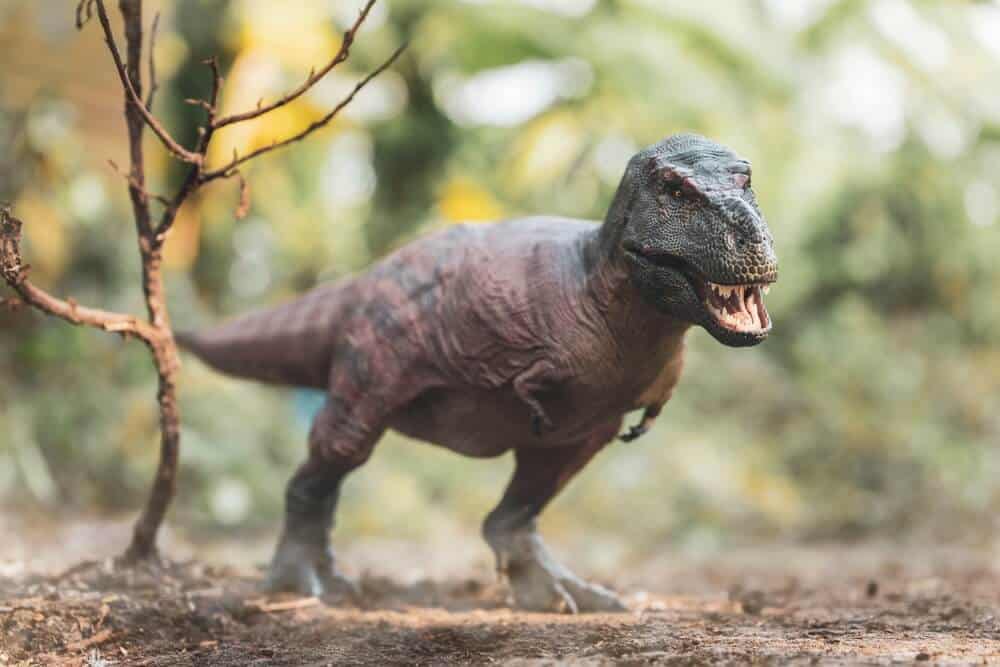 Whether quadrupedal or bipedal, both T-Rex and Spinosaurus had similar three-toed hind feet.

The surprising fact is that, despite the smaller body size, T-Rexes had larger feet than Spinosauri.

Tridactyl dinosaur footprints found in South America measured 1.67 to 2.13 feet in length. Spinosauri didn’t live in South America, but scientists concluded they must have had a similar foot size.

However, T-Rex footprints found in Montana are about 2.5 feet long. Other footprints suggest a range between 2.5 and 2.6 feet.

The most likely explanation for this paradox is the locomotion type.

As explained above, Spinosaurus dinosaurs most likely walked on four feet. T-Rexes were bipedal, so they needed bigger feet to maintain their balance.

A large size isn’t exactly synonymous with speed; yet, when looking at some of the largest terrestrial mammals (such as elephants or rhinos) we see that they can run at speeds over 30 miles per hour.

However, this isn’t true for dinosaurs.

According to science, T-Rexes had about the same running speed as the average human runner – around 10 to 12 miles per hour.

Spinosauri weren’t much faster, sprinting at top speeds of around 15 miles per hour. This extra boost may not seem like much, but it could give the Spinosaurus an advantage in a fight.

Given their massive size, it doesn’t come as a surprise that T-Rex and Spinosaurus dinosaurs also had massive skulls.

Craniometry has long been used to predict the brain size and intelligence in various species.

Based on available data, it is safe to assume that T-Rex had a bigger brain relative to its body size than Spinosaurus. Thus, T-Rexes might have been more intelligent.

One thing both Spinosaurus and T-Rex had in common was the diet – both dinosaurs were carnivorous and had long, sharp teeth that could easily tear through skin and flesh.

Spinosaurus featured strong jaws and approximately 64 conical teeth that were about eight to ten inches long.

T-Rexes had about 60 serrated teeth, wider and duller compared to Spinosaurus teeth. Nonetheless, they were robust enough to crush bones and, at about six inches long, long enough to inflict life-threatening injuries.

Despite the smaller skull and shorter teeth, T-Rexes had one huge advantage compared to Spinosaurus – very strong jaws.

In a study estimating the bite force in extinct dinosaurs, scientists found that a T-Rex had a bite force of about 48,505 Newton, which is the rough equivalent of 10,904 pounds of force.

The Spinosaurus had a strong bite too, but a lot weaker compared to the T-Rex. According to the same study, they could only muster a bite of around 11,936 Newton (2,683 pounds of force).

While T-Rexes were about four times stronger than Spinosaurus, the latter could easily kill prey and crush bones, too. To put things into perspective, humans have a bite of about 1,300 Newton, which is only 292 pounds of force. 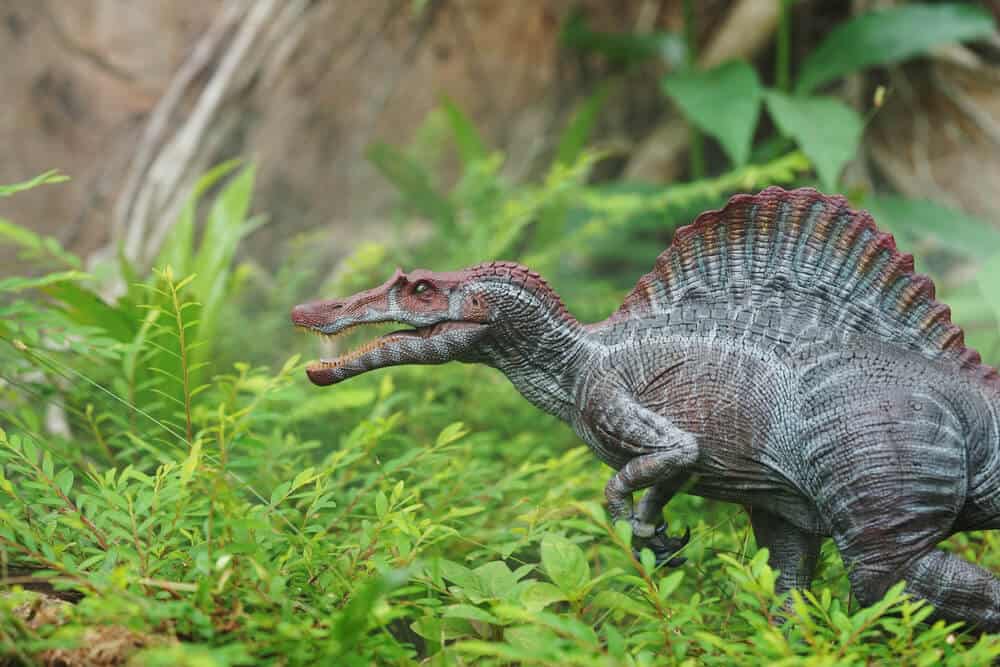 While there are no studies estimating the strike force of dinosaurs, finding out which species could strike the other with a greater force is important when calculating the odds of winning a fight.

This is why we considered the force at the moment of the impact as the strike force.

The momentum is easy to calculate multiplying the mass by the speed at the moment of the impact. For comparison purposes, we considered the top speed and weight for each of the dinosaur species.

As it is easy to imagine, the Spinosaurus regains the upper hand, being able to strike the T-Rex with a force equivalent to 690,000 lb.-ft./s.

The T-Rex and Spinosaurus are two extinct species in the Dinosauria order – much like all other species in this order. However, they belong to different families.

While both species are included in the Theropoda suborder, Spinosauri belong to the Spinosauridae family and Spinosaurus genus.

The species commonly referred to as Spinosaurus is actually called Spinosaurus aegyptiacus. Another species, Spinosaurus marocannus, is believed to have lived in Morocco.

T-Rex belongs to the Tyrannosauridae family and Tyrannosaurus genus. For a long time, Tyrannosaurus Rex was believed to have been the only species in the genus.

However, scientists now believe that there were actually three individual species, including the T-Rex, Tyrannosaurus Imperator, and Tyrannosaurus Regina.

Spinosaurus and T-Rex lived in the same geological era, even if the two have never coexisted. Even if they did, the probability that the two species came one across another were slim.

That’s because they lived in different parts of the world.

A difference between Spinosaurus and T-Rex is the habitat preference. Spinosauri were semi-aquatic animals mostly found near rivers but also in coastal areas.

T-Rexes were terrestrial and lived in different ecosystems. Fossils were found in many sub-tropical and semi-arid habitats, including coastal areas and plains.

T-Rex had strong jaws capable of pulverizing opponents. Perhaps this is why popular culture depicts these early reptiles as aggressive killing machines.

While it is generally assumed that T-Rexes were predators, scientists don’t know yet whether this is true or if they were primarily scavengers.

Spinosaurus behavior is also up for debate. Apparently, these reptiles were primarily piscivores – and the first dinosaurs to ever swim – so they likely killed prey more often than the T-Rex.

However, scientists claim that they acted more like flightless storks or herons rather than pursuing prey in the water.

Like most carnivorous animals, T-Rexes were opportunistic predators mostly pursuing large prey. They mostly fed on herbivorous dinosaurs, including Triceratops.

For a long time, specialists believed that these dinosaurs also displayed cannibalistic behavior. However, there is little evidence to support these theories.

As explained, Spinosauri were primarily piscivores, meaning that they fed mostly on fish. However, they likely ate terrestrial prey too.

We mentioned that Spinosaurus and T-Rex lived in the same geological period. Yet, this doesn’t mean that they were alive at the same time.

Both species were around during the Cretaceous, but Spinosaurus lived about 112 million to 97 million years ago.

As evidenced above, Spinosaurus and T-Rex didn’t exist at the same time. Yet, if someone were to bring these two large reptile species back again, who would win a fight?

Surprisingly, both would have about the same chances to come out victorious.

While a Spinosaurus is larger and heavier than a T-Rex, the latter could be more agile on land due to the bipedal way of locomotion. The T-Rex’s bite is also a lot stronger, so it could potentially inflict more serious injuries than a Spinosaurus.

Spinosauri could strike T-Rexes with a greater force, but only if they would slam into the opponent while running at full speed. Based on available data, winning the fight would largely depend on circumstances.

Should the Spinosaurus be able to ambush the T-Rex and push it towards a body of water, the former would likely win the fight. Should it slam into the T-Rex at full speed and knock it off, the Spinosaurus might improve its chances of winning.

However, all it would take for the T-Rex to put down its opponent would be a bite in a vulnerable spot, such as the throat or belly area.