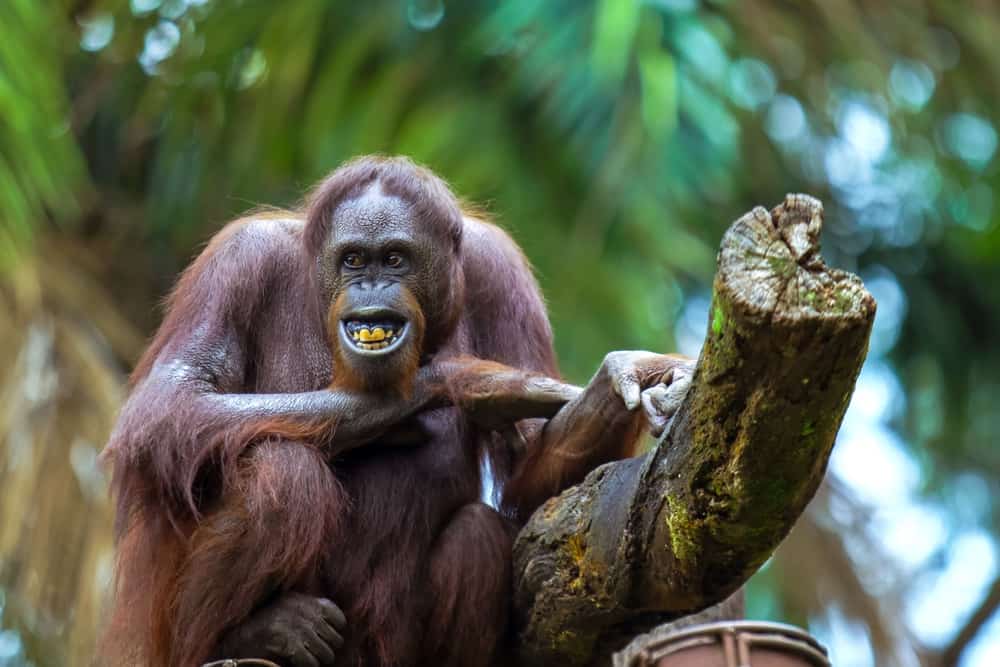 Orangutans are the closest living relatives of humans, so it’s not a huge surprise that their teeth and ours have a lot in common.

However, there are also some pretty clear differences, especially in size, jaw shape, and enamel thickness.

Native to the tropical rainforests of Borneo and Sumatra, orangutans spend much of their lives in the trees, hopping from tree to tree and even sleeping in nests high in the forest canopy. They subsist primarily on a diet of wild fruit.

However, even though they are mostly frugivores. In times when ripe, pulpy fruit is in short supply, they turn to other foods such as bark and seeds.

Their teeth have also developed thick enamel coatings to give them the strength to access these alternative nutrition sources.

Adult orangutans have 32 permanent teeth that erupt between 4 to 15 years of age. Both their upper and lower jaw formulas are the same, 2.1.2.3, composed of 2 incisors, 1 canine, 2 premolars, and 3 molars on either side.

The table below includes a quick list of orangutan teeth facts*:

*Data in the table above were sourced from research papers, scientific publications, and other official sources cited throughout the article.

While orangutans have the same dental formula as humans and other primates, their jaw morphology is distinctly different.

The orangutan jaw is rectangular rather than u-shaped, as the large size of their teeth requires that structure.

However, orangutans, like us and the other large primates, have 32 adult teeth: on both the upper and lower jaws they have 4 incisors, 2 canines, 4 premolars, and 6 molars.

Orangutans, like the other great apes (except for humans) have a distinct gap between the second incisor and canine tooth. This is called a diastema.

How Many Teeth Do Orangutans Have?

An adult orangutan has 32 permanent teeth, while infants have 20 deciduous teeth.

Baby teeth do not include molars.

How Big Are Orangutan Teeth?

As you can see any time an orangutan shows off its teeth, orangutan teeth are big. They may have the same number as a human, but in terms of size, they’re much larger.

Canine teeth are about 1.7 inches long. Upper incisors range from 1.4 to 1.2 inches, while premolars average just under an inch in length, and molars are even shorter.

The premolars are very wide and have 3 roots.

When Do Orangutans Develop Baby Teeth?

Orangutan baby teeth erupt at about the same pace as humans, with the first teeth erupting at around 4.5 to 6.5 months, with all 20 emerging by 12 months.

Mothers continue to nurse their young until they are about 7 years old, but they start supplementing their milk with solid foods at around 3 months.

Because the babies do not have any teeth yet, the mothers grind up the food in their mouths before feeding it to their infants.

The ingestion of solid foods accelerates between 12 and 18 months when the baby orangutans have their first teeth and can use them to eat.

By the time they are 4, a young orangutan starts to climb and forage for food, which their deciduous teeth can handle on their own. They will continue to stay with their mother until about 7 years of age or so.

It is only after they strike out on their own that the mother may become pregnant again.

Permanent dentition starts when orangutans are about 5 years old, and continues until the final teeth erupt between 12 and 15 years.

This is very similar to the emergence of permanent human teeth, whereas most other primates get their permanent teeth much sooner.

Interestingly, the permanent molars emerge before the baby premolars have been replaced with permanent premolars. 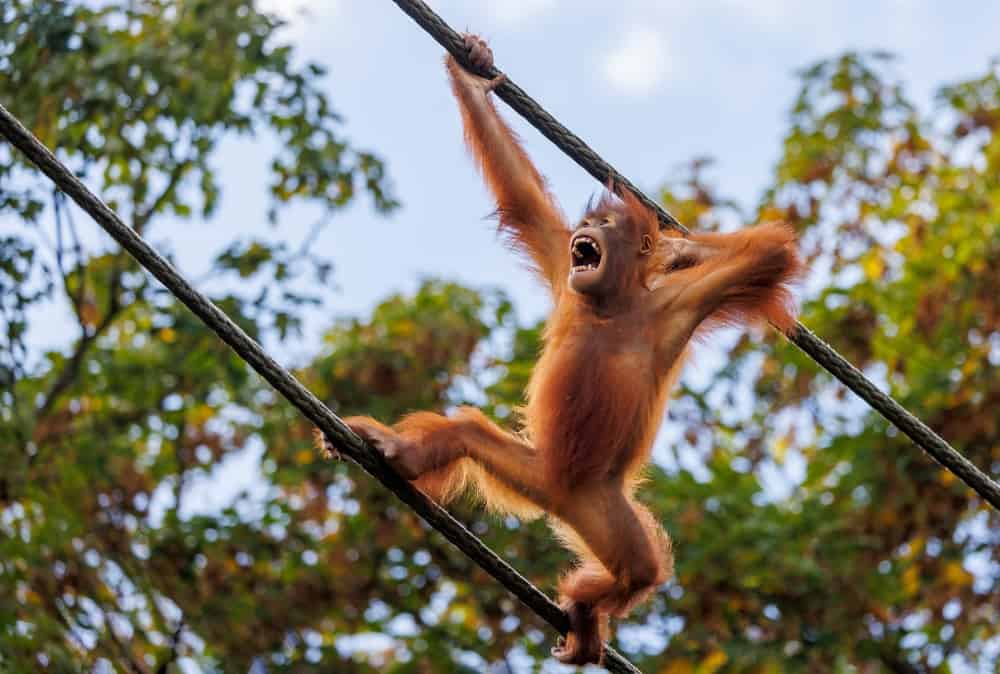 In studying orangutan teeth, researchers have found that the enamel on orangutan teeth is extremely thick compared to other primates such as chimpanzees. They also have deep ridges on the basins of the molars.

The enamel thickness ranges from .75 to 2.18 mm, depending on the molar type. There is little difference between the enamel on male and female teeth, indicating a similarity in diets for both sexes.

Their teeth have evolved like this because of the diet of the orangutan in the wild. Many of the fruits that are their preferred food have tough shells that require strong teeth to pierce.

And when fruits are in short supply, orangutans turn to other food sources such as bark and seeds, which require really strong teeth.

The thick layer of enamel on their teeth can help prevent damage to the teeth, which would impede their ability to eat when food sources are limited, and thus they live long enough to reproduce.

Interestingly, there is actually a difference between the 2 separate orangutan sub-species. The Pongo abelii in Sumatra does not have the same thickness of enamel that Pongo pygmaeus in Borneo does.

The 2 populations have been isolated from each other for at least 10,000 years.

Sumatran orangutans have more consistent sources of ripe fruit, and so do not have to resort to eating harder foods such as seeds and bark as much as their cousins on Borneo. As a result, their tooth enamel is not as thick.

What Is The Orangutan Bite Force? 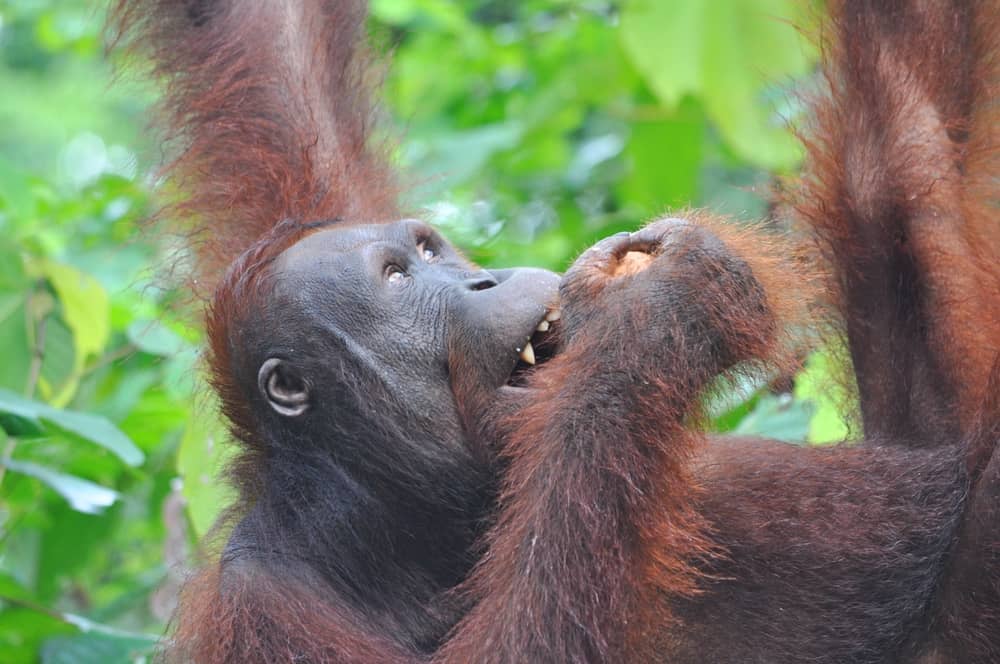 Orangutans have a bite force of 600 PSI. This makes it possible for them to crack open seeds.

For instance, in Borneo orangutans have been observed eating up to 1,000 Mezzettia parviflora seeds a day. This is an important element in their diet, since the fruit that makes up the bulk of their food is low in protein.

See also  Do Crabs Eat Shrimp? (Here’s What They Do)

Not only do they have to crack open the seeds, but also the outer shell of the fruit that protects them. Other primates, such as gibbons, are unable to breach the plant’s defenses.

Their jaw strength is roughly equivalent to that of 6 people combined, so they have a truly formidable ability to crack open even the toughest nuts in their quest for food!

There are very few cases of humans being bitten by orangutans. In the wild, the treetop-dwelling primates easily elude humans, so there are few direct encounters between them.

In fact, orangutans don’t even spend much time with other members of their own species!

While females share their nests with their young, they only have one offspring at a time, and only mate again when they depart the maternal nest at about 7 years old.

Studies have shown that male orangutans spend 91% of their time alone, so there is not much opportunity for aggressive behavior such as fighting.

Still, some studies have found that up to 80% of male orangutans show signs of bite wounds from other males. Occasionally females have also attacked other females.

However, the close proximity to humans has resulted in some biting incidents in zoos. There are reports of keepers having fingers bitten off by male orangutans.

Aside from the obvious physical trauma of a serious bite wound, bites from close relatives such as orangutans run the risk of bacterial or viral infection.

For that reason, orangutans in captivity usually receive the same schedule of vaccinations as are recommended for humans.

Orangutans are fascinating close cousins of humans, and they share many similarities with us, including their dental characteristics. They have the same number and types of teeth as humans, which emerge at roughly the same rate.

In fact, dental care for an orangutan, whether it’s in a zoo or a wildlife refuge, can look very similar to that of a human, right down to the dentist’s chair!

Find Out More About Orangutans:

How Strong Are Orangutans?