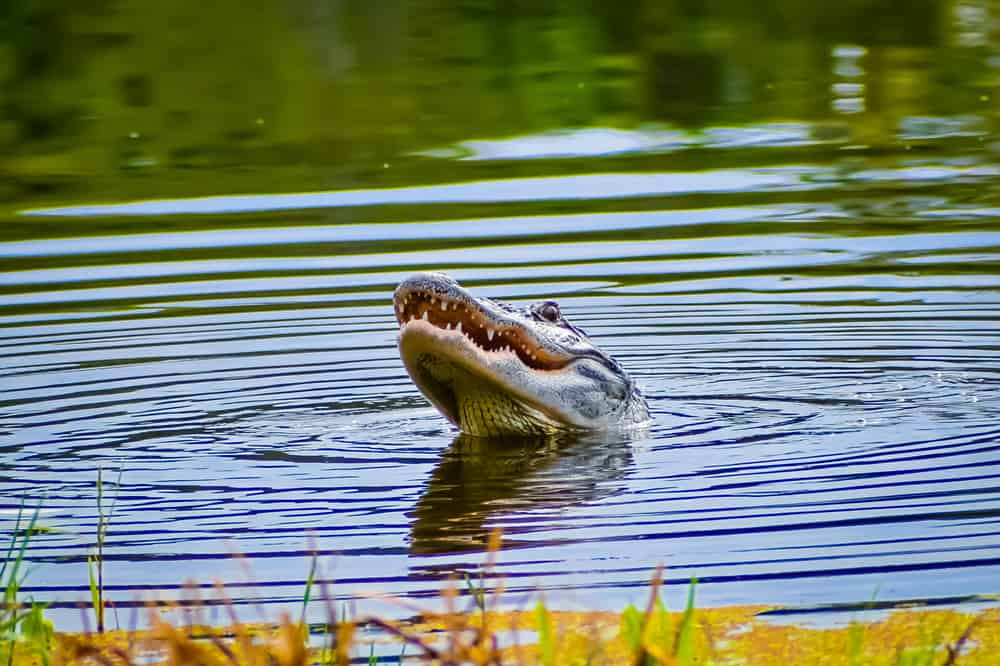 Alligators are large fearsome animals that primarily live in the swamp. They have sharp teeth and strike their prey quickly, but did you know alligators are also stealthy jumpers?

Alligators are great jumpers and have been recorded jumping impressive feats up to 6 feet in the air! This is impressive considering their massive size. Alligators are not light weighing anywhere from 200 to 1,000 pounds.

How High Or Far Can Alligators Jump?

These reptiles typically jump up to 6 feet high.

They can also lunge vertically, especially when young. The younger an alligator is, the easier it is for them to jump up because of its low body weight.

There are no average estimated numbers though.

Why Do Alligators Jump?

Alligators fling themselves out of the water to catch prey. Typically, they push their bodies up and jump 5-6 feet on shore or in boats.

They don’t just jump out of the water though. They also jump up to catch prey on the shore or hang from a branch.

When alligators feel threatened, they slowly stalk their prey with their body almost entirely underwater. They blend in so well, you likely won’t notice them!

As they get closer, an alligator will jump or lunge at the threat, even if it’s a boat or paddle! If the alligator is close enough, they only jump or leap a foot or two across the water.

How Does An Alligator Jump?

Alligators use their thick muscles to jump. They use their tails to jump. Underwater, their tail propels quickly, while they get their front legs ready.

See also  Why Do Camels Foam At The Mouth? (Find Out!)

Alligators use their front legs as springs when it hits the ground or a rock/branch in the water. These simple movements let them leap 6 feet in the air within seconds!

Not only can alligators jump and leap in the air, but they also know how to climb trees! It’s actually more common than you’d think.

Alligators climb trees when looking for prey. Sometimes they sleep in trees to protect themselves from predators. This is very common for young alligators.

As long as an alligator has an incline, it can easily climb trees. Not only can they climb trees, but they’ve been observed climbing over fences.

How Fast Are Alligators?

Possibly the scariest part about alligators, apart from their 80 conical-shaped teeth, is their speed. Alligators are fast runners, in the water and out of the water.

Their quick speed is how they attack their prey in the water. Despite how fast they are, alligators are also quiet hunters that blend into their surroundings.

On land, alligators can hit speeds of up to 35 mph. While in the water, they only hit speeds up to 20 mph, but this is enough to quickly leap and attack.

Although 35 mph is impressive, this is typically only in short bursts. Alligators grow tired if they continue running for long because of their massive bodies.

Alligators not only weigh a lot, but they are also very long, sometimes surpassing 15 feet long. While it was not confirmed, some reports say the largest alligator caught was 19 feet in Louisiana.

Are Alligators Faster Than Humans?

While the idea of being chased by an alligator sounds like something out of a nightmare, most humans can quickly outrun alligators.

Alligators grow tired quickly, averaging 10 mph on land. It’s likely an alligator will simply chase a human to scare them off since they aren’t interested in large prey.

Alligators though have an advantage in the water since the speed of a human slows down. For example, humans typically swim 5-6 mph in the water, which means alligators swim about 4 times as fast.

Are Alligators Faster Than Crocodiles? 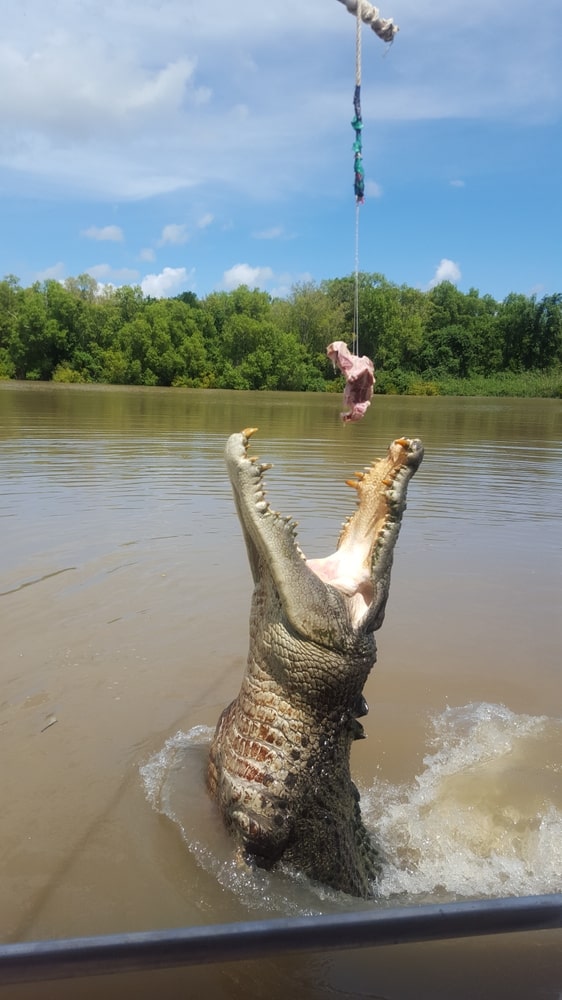 Crocodiles and alligators are related, which explains why they look and behave so similarly.

Alligators and crocodiles belong to a taxonomic order called Crocodylia. However, they belong to different families.

Technically, alligators are slightly faster than crocodiles, but they have similar advantages in the water.

However, saltwater crocodiles only run 15-18 mph on land, while alligators can reach 35 mph.

While crocodiles aren’t as fast as alligators, they also jump very high and are known to be very aggressive. Alligators are opportunistic killers and won’t hunt if they aren’t hungry.

Nile crocodiles are some of the most aggressive animals in the world, especially compared to American alligators or American crocodiles.

Alligators Vs. Other Animals and Their Jumps

Alligators are impressive jumpers, but there are some other animals that jump even higher!

Dolphins are incredible swimmers. They live in pods with other dolphins, taking care of each other.

Dolphins live in freshwater and saltwater. However, dolphins and alligators don’t live in the same environment.

See also  Do Camels Eat Snakes? (Are They Poisonous?)

Some whales love to jump, also called a breach.

Sperm whales dive deep into the ocean and gain momentum by quickly swimming up. Scientists aren’t sure how high sperm whales jump, but it’s rare to see these whales leap their whole bodies out of the water.

Female sperm whales breach more often than males. Alligators can leap their entire bodies out of the water, so they technically win. 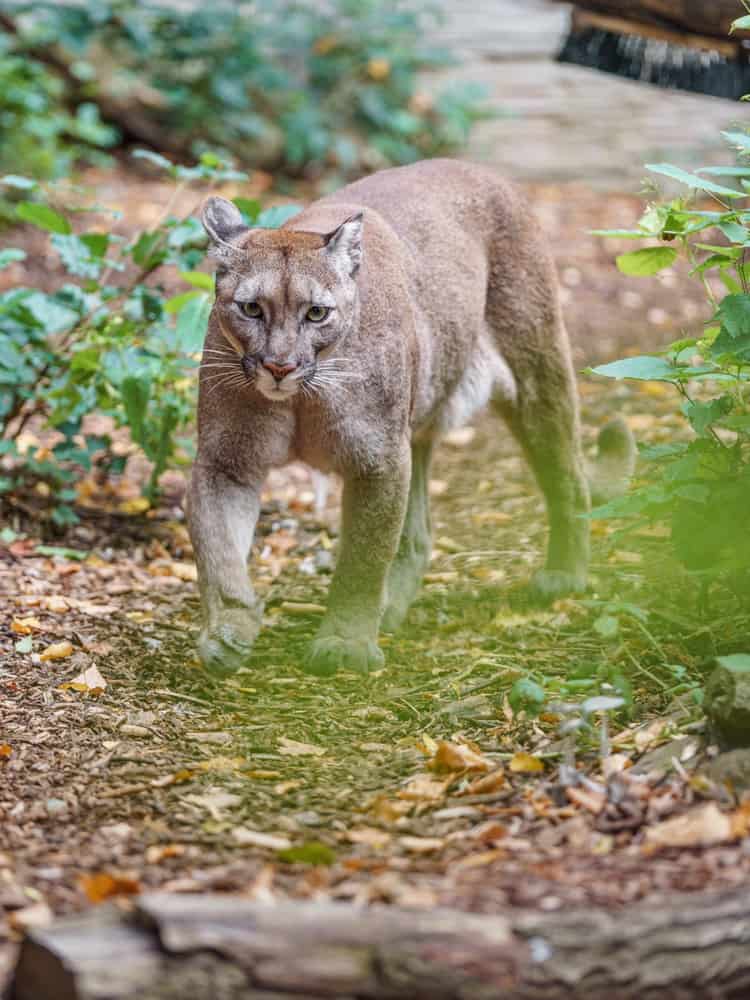 Cougars, also known as mountain lions, are also great jumpers! From a sitting position, these impressive cats can jump up to 18 feet!

They can leap longer distances when jumping horizontally.

They definitely jump higher than alligators, but adult alligators have the upper hand in the water. Still, cougars could take down young alligators. 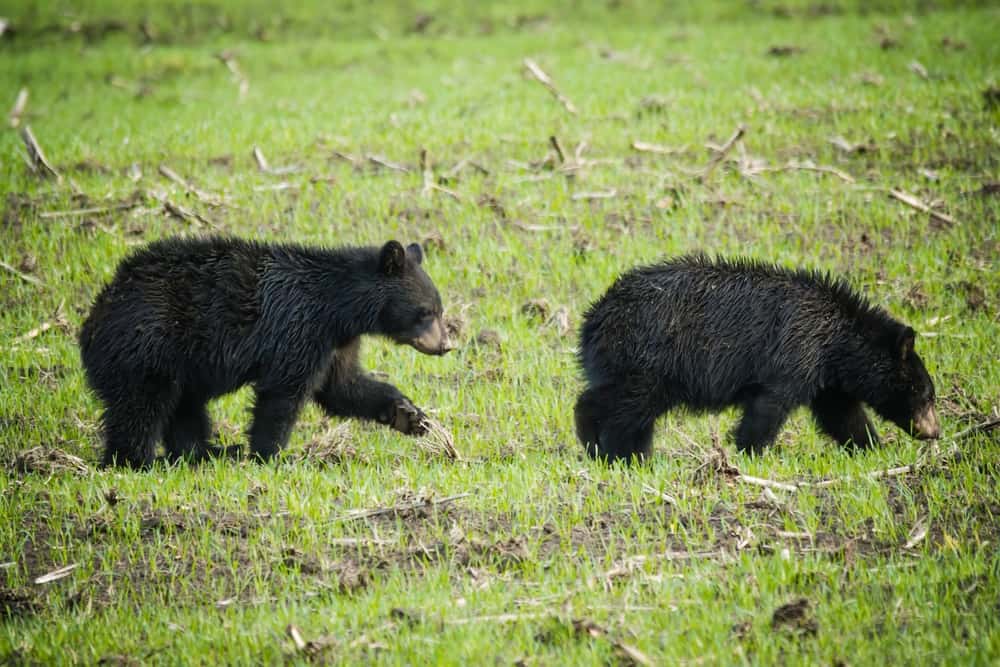 Black bears are massive animals. They aren’t great jumpers but can climb with a small leap into the air.

Rarely can black bears jump past 6 feet. Still, black bears are fast runners, reaching up to 35 mph in short bursts, like alligators.

Overall, alligators are impressive and muscular reptiles with the ability to jump! Alligators can leap up to 6 feet in the air and also commonly lunge vertically.

They jump to catch predators and land on low branches, trees, or the shore.