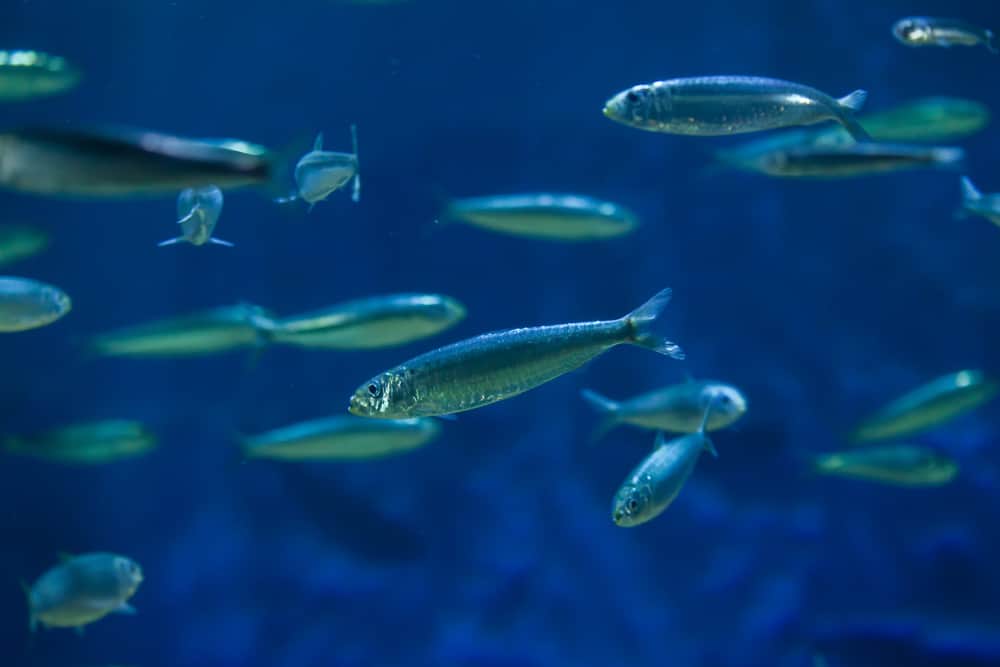 Herrings are small to medium-sized fish with silver scales. They’re caught or farmed around the world as food as they provide several health benefits due to their fatty acids.

Herrings are often packaged whole into cans after being smoked, like sardines. But sardines aren’t the only fish similar to herring.

In fact, there’s a whole range of fish species that are like herrings, whether in shape, habitat, or nutritional value.

Read on to learn about 13 fish species that are like herrings of all kinds. 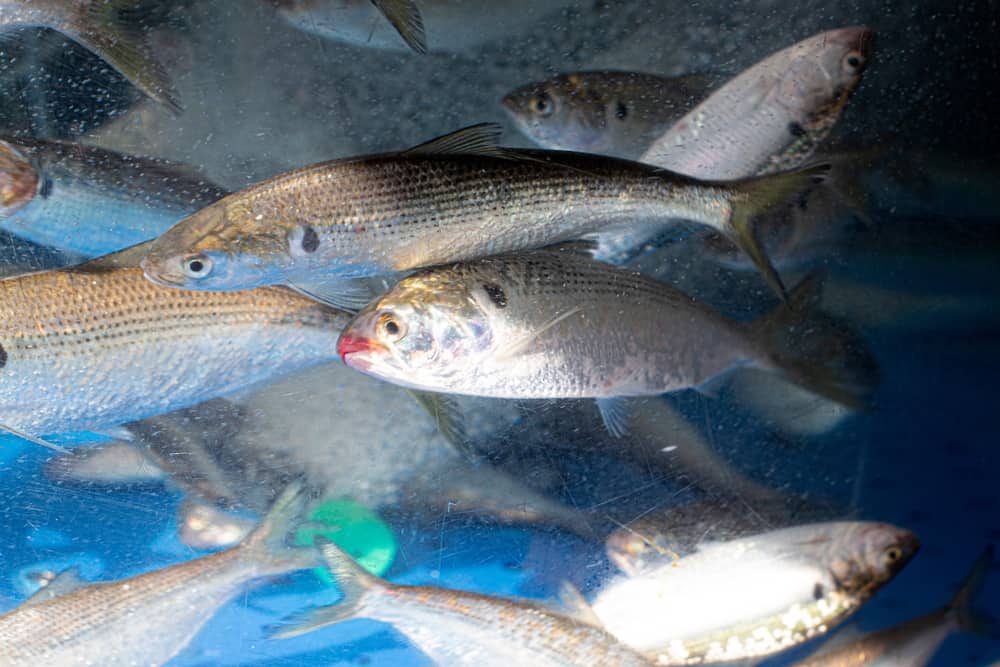 Scientific name: Dorosoma cepedianum
Similarity: American gizzard shads and herrings do not have a lateral line system through their trunk.

All fish have a sensory system of canals that run through their body called the lateral line. This helps them detect movement in the water around them. It’s usually visible on the trunk of a fish’s body.

In members of the Clupeidae family, though, the lateral line is either almost invisible or non-existent on the trunk. Instead, their lateral line system is regulated to their heads or runs through only a short part of their main body.

Herrings and American gizzard shads are both members of Clupeidae, so their lateral lines don’t run through their whole body. In addition, they both have the same silvery coloring indicative of most clupeids. 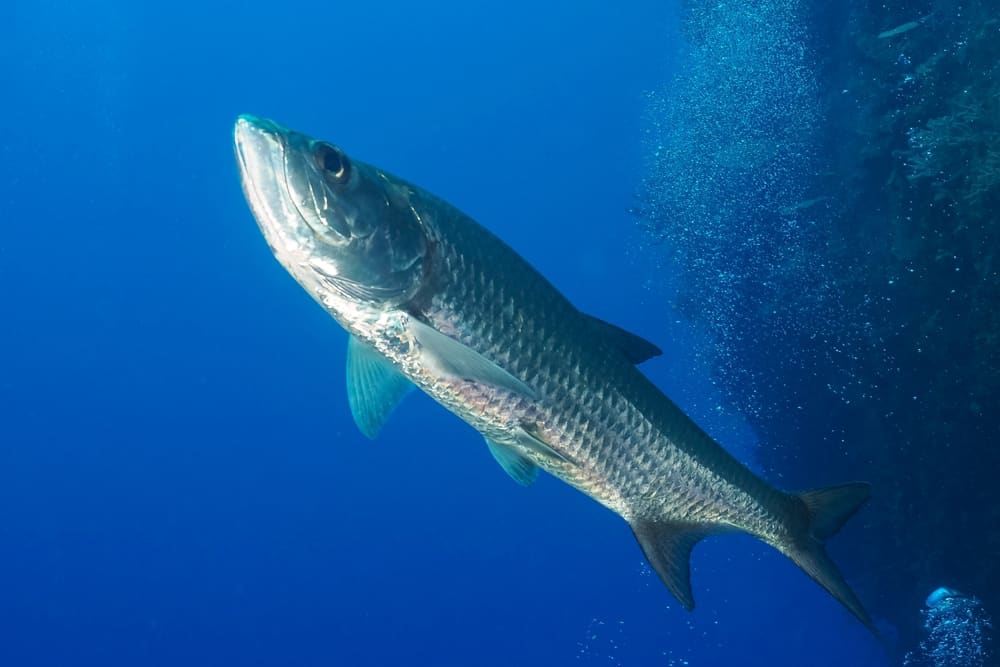 Scientific name: Megalops atlanticus
Similarity: Tarpons and herrings have long bodies with silver scales and are fished for food and sport.

Although not a member of Clupeidae, Atlantic tarpons look very similar to many herrings. This is due to their flat, elongated bodies.

They also have the same silver coloring to their scales. In fact, the tarpon has the nickname “the silver king” among game fishers.

This is another similarity between tarpons and herrings: they are both popular fish to catch, albeit for different reasons. The herring is a staple food source around the world and fishers can catch millions in a single year.

Atlantic tarpons are also fished often, although they’re not much used as food. Instead, they are prized game fish due to their tendency to leap out of the water and put up a fight.

Scientific name: Balantiocheilos melanopterus
Similarity: Balas aren’t sharks at all and are closer to herrings due to their appearance and diet.

This little freshwater fish has “shark” in its common name due to its torpedo-like body and large fins. However, sharks belong to the Chondrichthyes class, while bala sharks are Actinopterygians.

This puts them closer to herrings than sharks, but similarities between the two go even further than their class. Both are silver-scaled fish that are small in size. 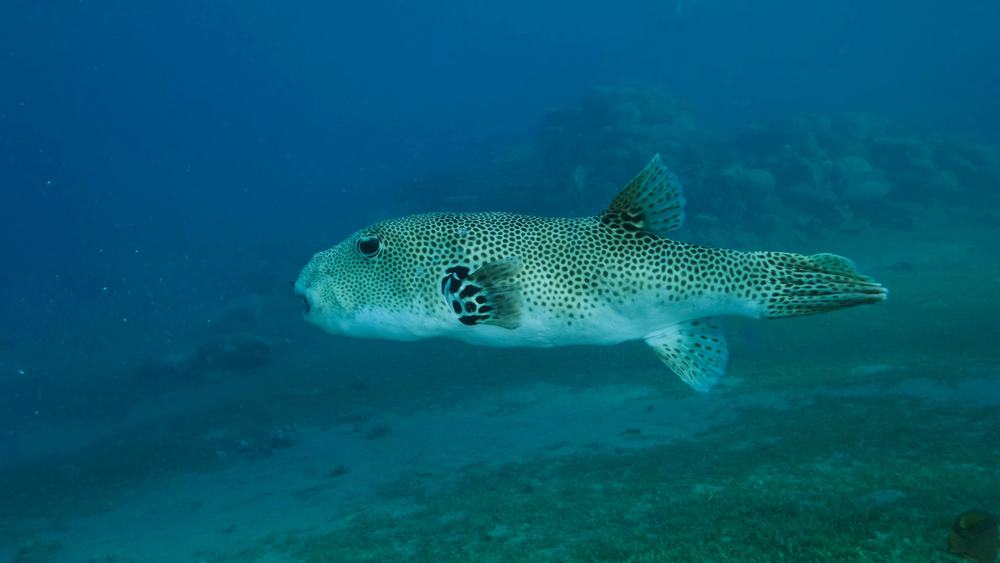 Scientific name: Arothron stellatus
Similarity: Herrings and pufferfish have specialized lateral lines and can be used for food.

The pufferfish’s system is not made up of canals like most fish. Instead, they have neuromasts, or sensory cells, directly on their skin in a specific pattern. They can also have them in open grooves on the skin.

Another similarity between the two fishes is that they can both be used for food.

However, pufferfish is a dangerous delicacy, whereas a herring is a more simple food source. Most pufferfish are extremely poisonous, and their flesh contains a toxin that can kill a person.

Pufferfish have to be specially prepared in order for them to be safe to eat, but the process of doing so requires rigorous training. The death toll has declined in recent years, but as many as 176 people died from eating fugu in 1958. 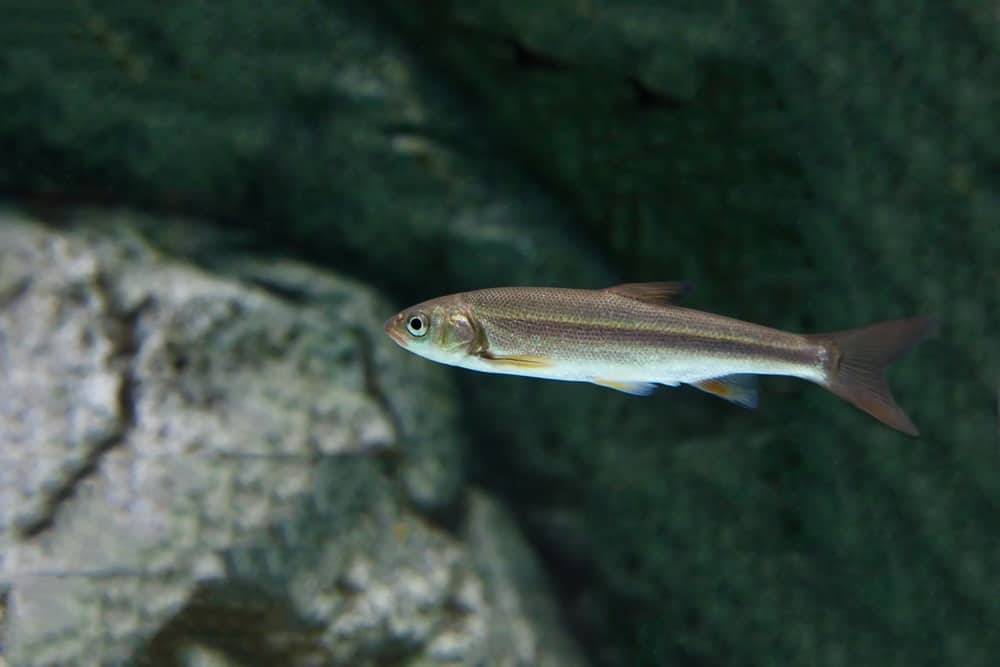 Scientific name: Semotilus atromaculatus
Similarity: Both are small silvery fish that can live in freshwater rivers.

Although they aren’t part of the same family, chubs and herrings can look very similar. Both are small fish and have a silvery tint to their scales.

Some herring species have a dark spot towards their head, as do chubs. The common creek chub also has one towards its tail.

Finally, there are many species of herrings that live in bodies of freshwater such as rivers. Common creek chubs not only live in small creeks but also in slow-moving rivers. 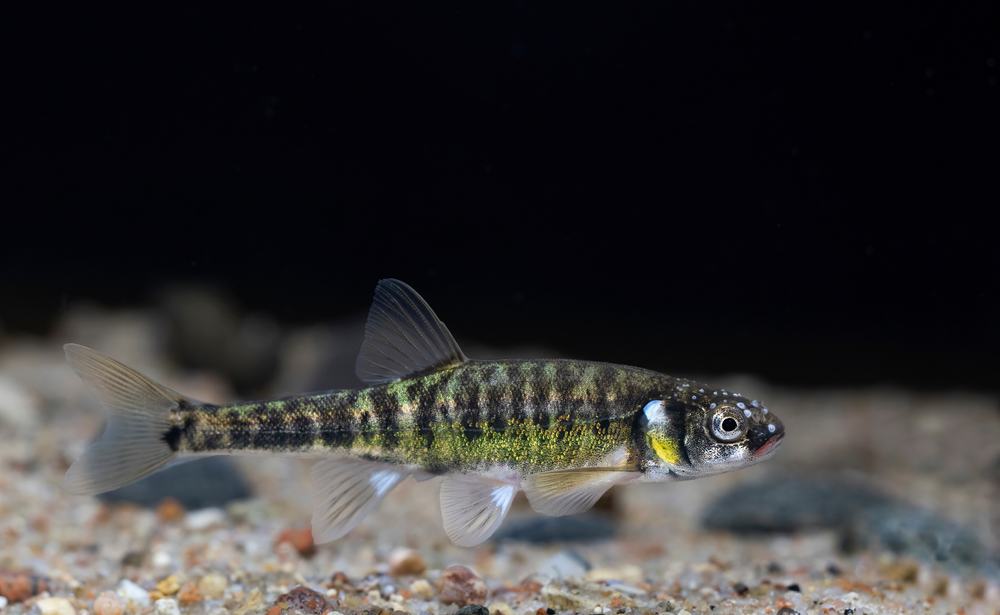 Forage fish refers to small fish that are often preyed upon by larger fish; they are also called bait or prey fish. As forage fish, minnows and herrings are central to the food webs in bodies of water.

This is because of both what they eat and who eats them. Forage fish often eat planktons, which produce energy from the sun. This energy then transfers to forage fish who form enormous schools and shoals.

See also  Coyote Vs. Dingo: Who Would Win A Fight? [Explained]

These attract many predators who then eat the fish and gain some of the energy and nutrients that came from the plankton. 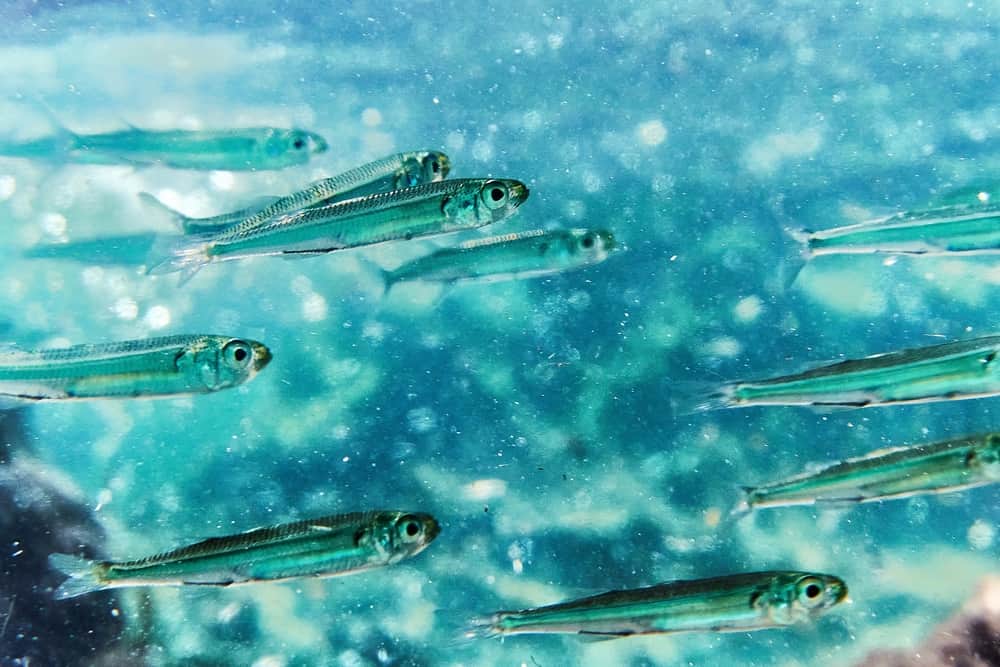 Anchovies are usually even smaller than herrings, reaching between four and ten inches long (10-25 cm). They have silver scales and are another type of forage fish living in the ocean.

Also like herrings, anchovies are a popular food source around the world. They provide essential proteins, fatty acids, and vitamins.

Herring and anchovies contain high levels of polyunsaturated fatty acids, which can reduce the risk of cardiovascular issues, obesity, and cognitive decline.

The name “pilchard” is sometimes used interchangeably with “sardine,” like how a herring can refer to many different species. All of them are typically small, silvery fish that can be found in the ocean.

Pilchards are also forage fish like herrings which pass on energy from the plankton they eat to larger fish. In fact, the European pilchard is an even more important part of its particular ecosystem because of the water’s depth.

European pilchards live in the Adriatic Sea, which is very shallow. This makes the food chain shorter than in other habitats and pilchards contribute even larger amounts of total energy in the system. 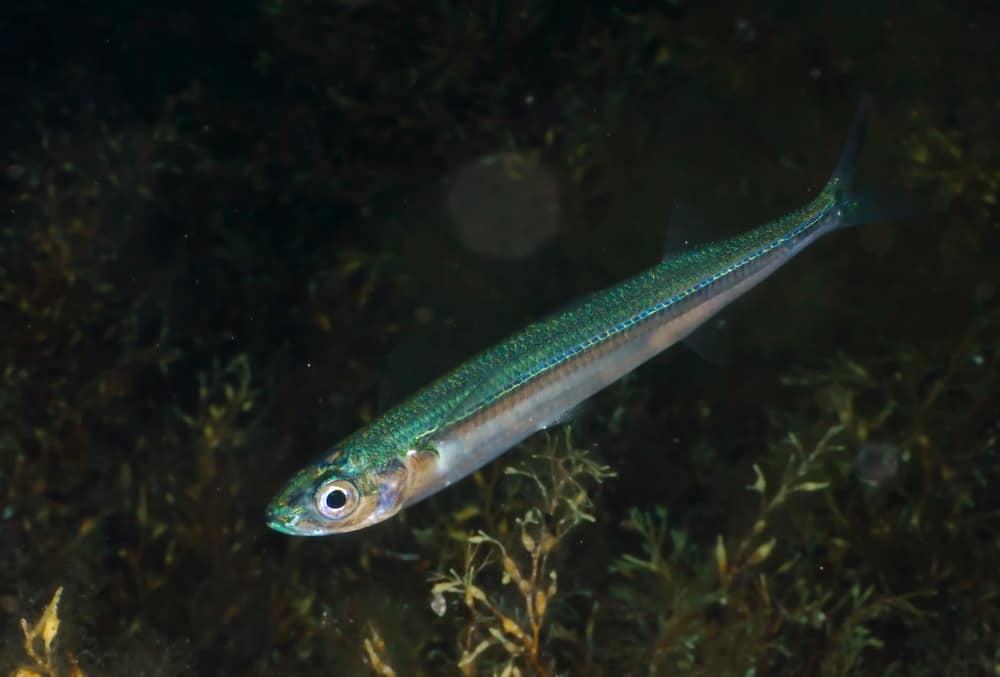 The European sprat is a small fish with an oblong-type body, usually growing to between three and five inches (eight to twelve centimeters). Similar to herring, sprats have a slightly protruding lower jaw and silver scales.

European sprats are also forage fish like herring, feeding on plankton in large schools. Larger fish then eat them, but their massive numbers also make them easy to fish.

Not only are they high in fat like herring, but they are also caught to be used as fishmeal. 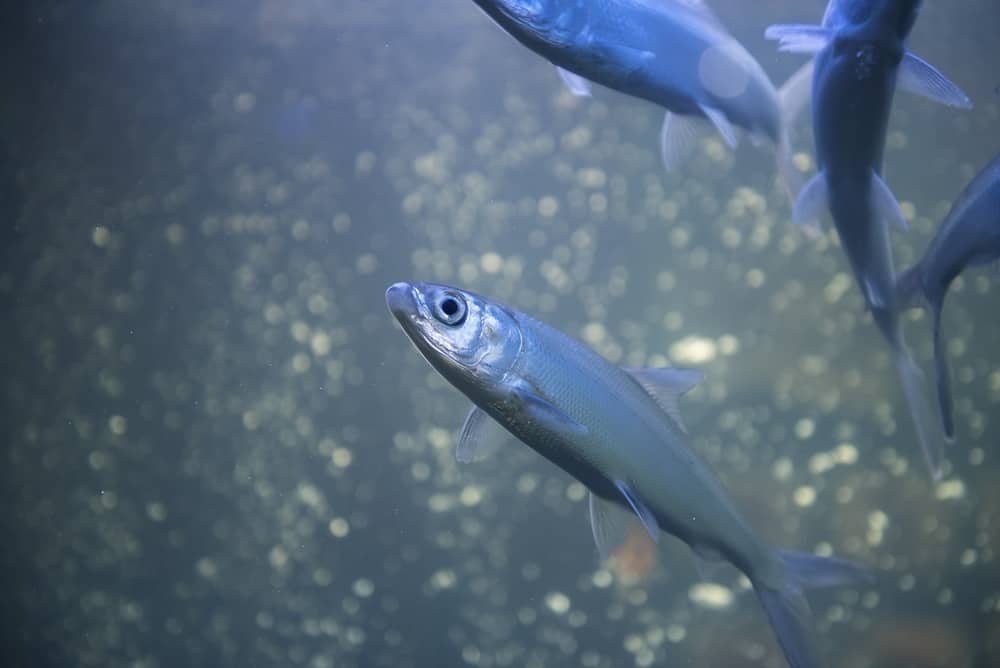 Both milkfish and herring have very similar body types, even though they’re from different taxonomic families. They are long fish with silvery scales and have no teeth.

Milkfish is not as universal a foodstuff as herring, in part due to its bonier body. Even so, milkfish are very popular in Taiwanese cuisine.

These fish are commonly found in tropical waters and can survive in brackish and shallow-water areas. This makes them easy to harvest, as does their volume of egg laying. During the spring, milkfish can lay several million eggs. 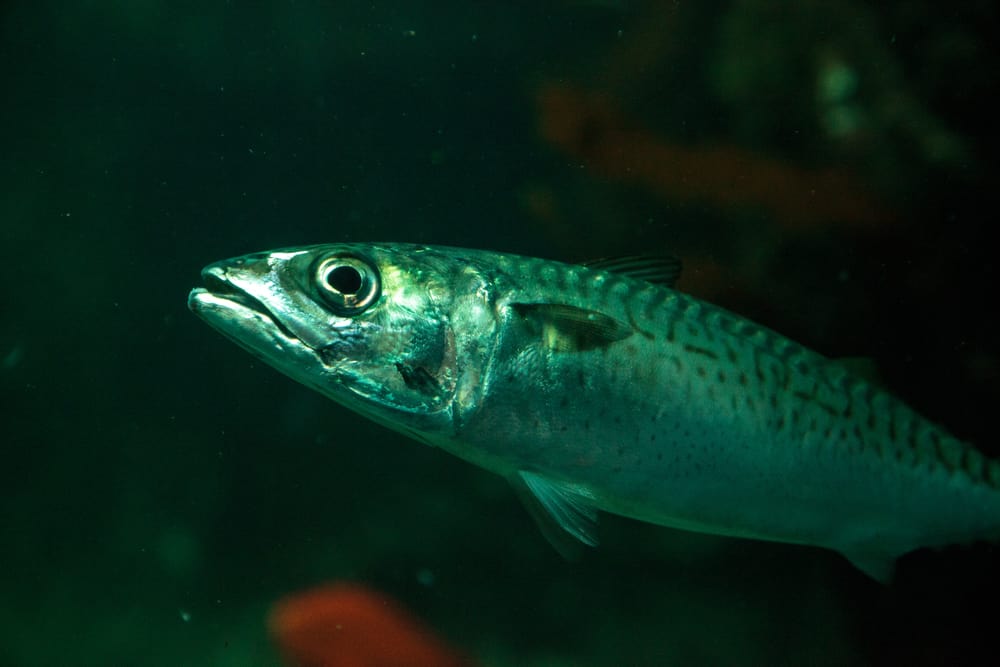 Scientific name: Sardinops sagax
Similarity: A close cousin of herrings in the same subfamily, this sardine is the only species of its kind.

Sardines and herrings are so similar that their names are often interchangeable. They can both be very small, often less than a foot.

They also belong to not only the same ray-finned fish family, but the same subfamily, Clupeidae.

There are several genera of sardines in the Clupeidae family, each with multiple species. However, the Sardinops genus has only one species: the Pacific sardine.

Other names for this fish include the blue-bait, blue pilchard, and Californian pilchard. 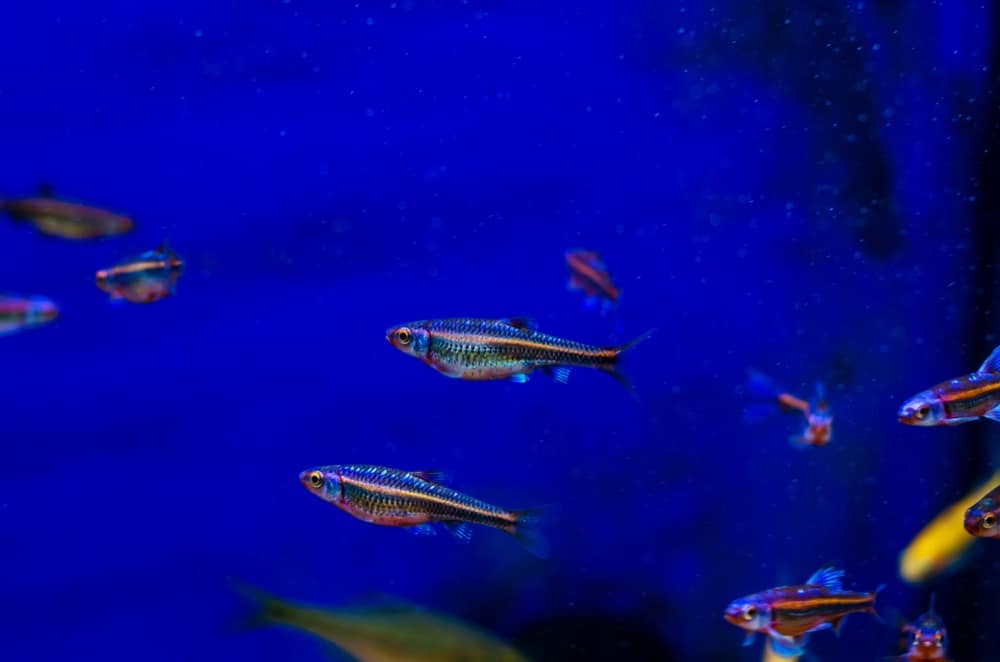 Scientific name: Notropis chrosomus
Similarity: Rainbow shiners are more vibrant the most herrings, but they are also small plankton eaters.

Herrings can live in freshwater or saltwater, and most of them eat plankton as part of their diets. Eating plankton is what makes them an important part of their ecosystems.

Rainbow shiners also eat plankton, specifically in freshwater habitats. They are also tiny fish like many herring species, averaging about 2.4 inches (6.1 cm) in length as adults.

They’re easy to differentiate by sight, though, as rainbow shiners have translucent, reddish scales rather than solid silver. 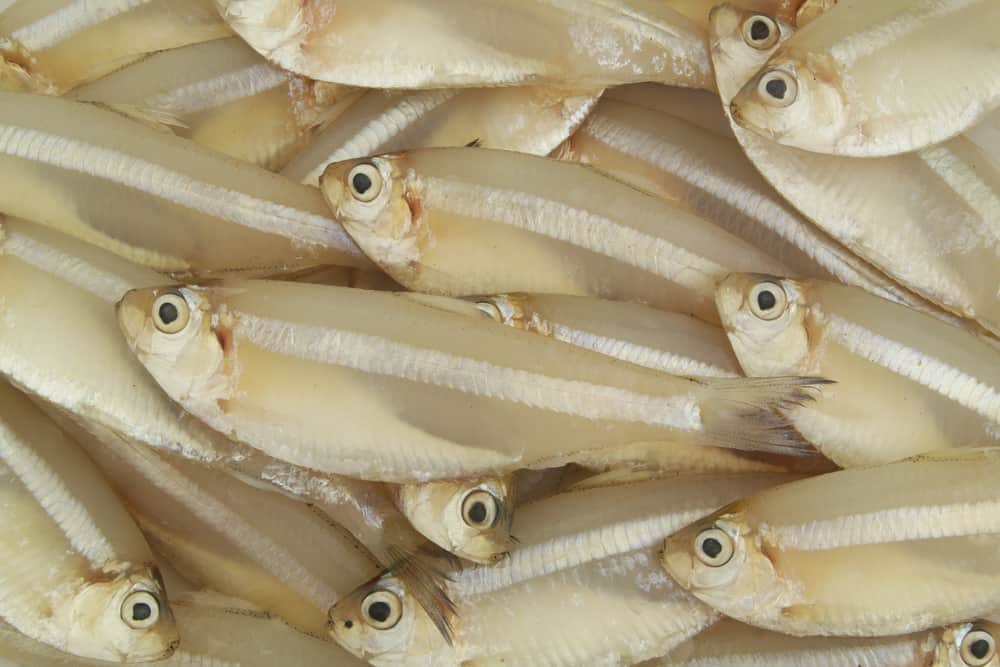 Scientific name: Escualosa thoracata
Similarity: A squat sardine specimen that is also referred to as a deep or northern herring.

The white sardine demonstrates the way that naming conventions can be confusing for certain fish. The Clupeidae family contains subfamily and genera of herrings, shads, and sardines, among other animals.

Sometimes the line between what is considered a herring and what is a sardine is blurry as they’re all so similar.

White sardines, for example, are also called deep herrings or northern herrings. But they don’t belong to the type or “true” genus of herrings, Clupea.

It is still, however, a small, silvery fish very much like typical herrings. They do have slightly more robust bodies than the elongated herrings, but both fishes feed on various types of plankton.

Herrings are an important fish for not only our food supply, but also their own habitats. But they aren’t the only fish that are farmed and caught for food or that are vital to the ecosystem.

From sardines to sprats, there are many fish that share similarities with herrings. Some of them are so close that some regions use “herring” as one of their common names.

Whatever they’re called, these 13 fish all have a lot in common with various species of herring.