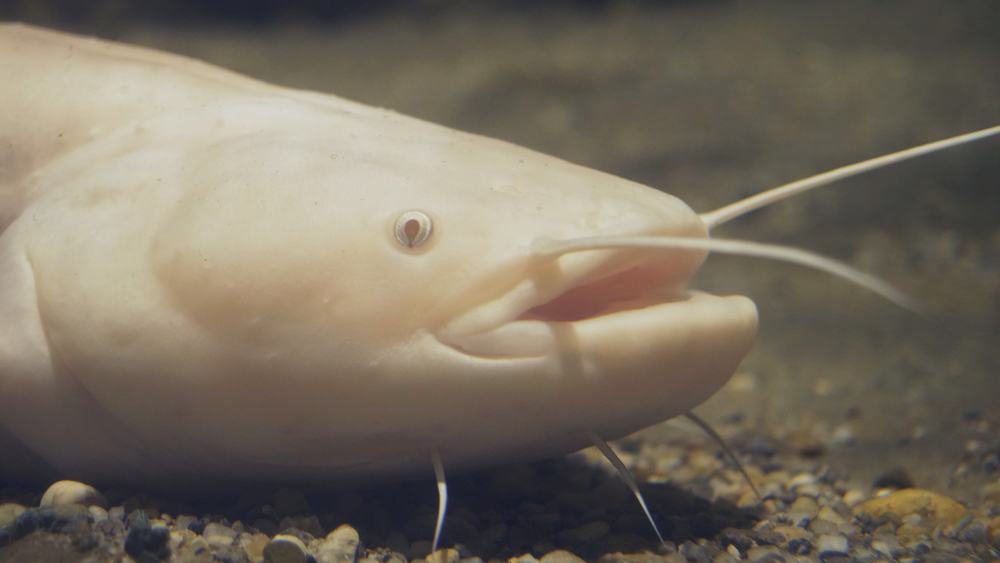 There are over 3,000 catfish species in the world belonging to over 40 taxonomic families. Every species, though, shares a distinct feature: the “whiskers” that give them their catlike faces.

These are not real whiskers, but rather extra-sensitive organs near the mouth. Not all catfish have obvious barbels, but they are still present. Catfish use these barbels to sense out food around them.

This is very helpful as most catfish are bottom feeders. They eat both plant life and other small animals that lurk in the dim depths of the water. The barbels help them feel around for plants and prey when they can’t see as well.

Catfish are also scaleless animals. All the many species either have nothing over their skin or a unique armor of plates.

To have so many families of catfish with so many similarities is amazing on its own. But catfish are not only like their own kind. There are many other fish that share traits common among catfish.

These seventeen animals all have something in common with at least one catfish species: 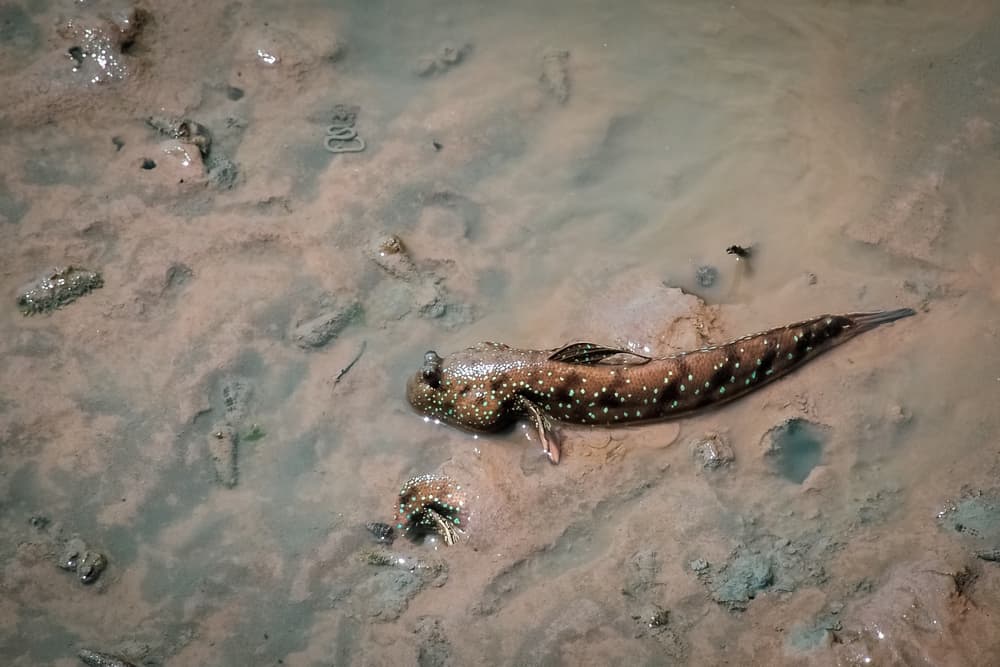 Scientific name: Periophthalmus barbarus
Similarity: Atlantic mudskippers and certain species of catfish can “breathe” outside of the water.

The Atlantic mudskipper is an unusual fish in that it doesn’t spend much time in the water. In fact, it spends 90% of its life out of the water, using special cavity mucosa in its skin to take in oxygen from the air.

This is similar to some species of catfish such as Clarias batrachus – the walking catfish. They have special organs next to their gill cavities that are covered by a respiratory membrane. 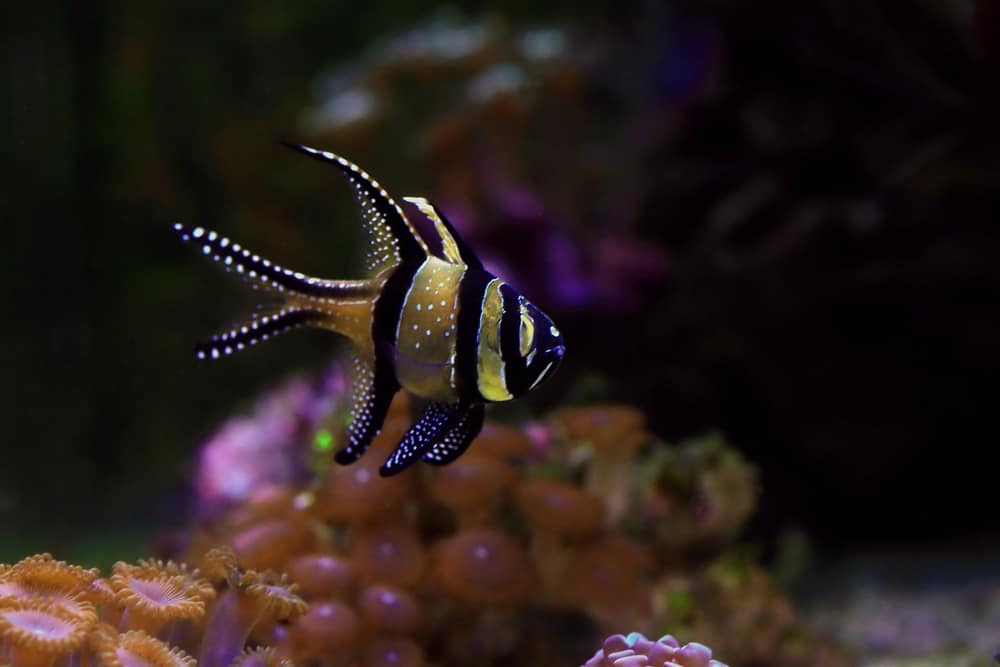 The Banggai cardinalfish is a tropical fish that lives in the Banggai Islands. They are mouthbrooder fish, like the Ariidae family of catfish.

Both fish carry their eggs inside their mouths until they hatch.

Even after hatching, the young can stay in their parent’s mouths for some time. Also like catfish, cardinalfish are paternal mouthbrooders. The males carry the eggs and young instead of the females. 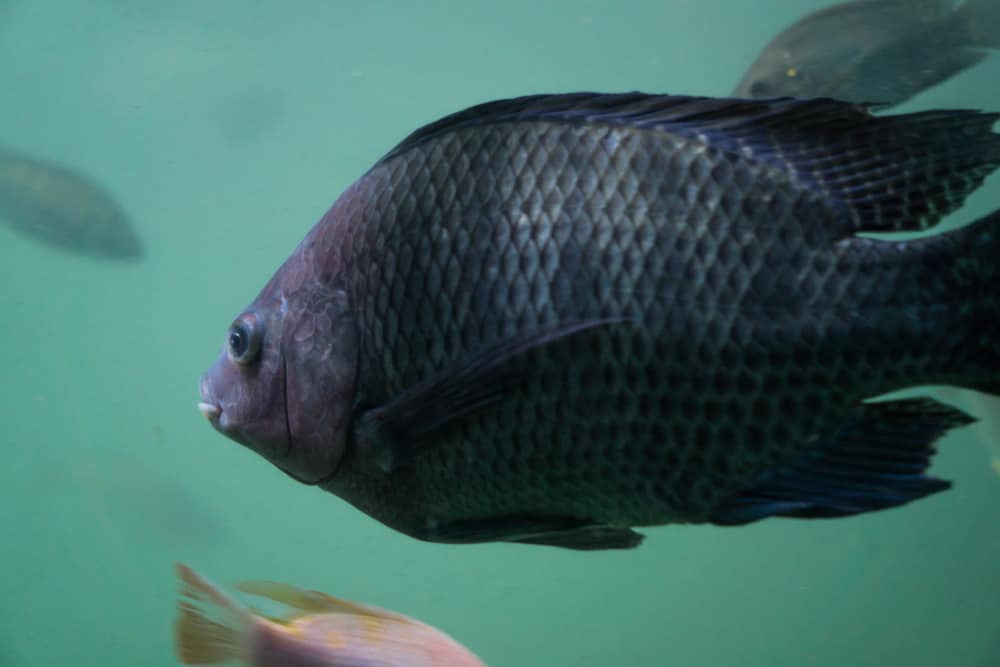 Scientific name: Oreochromis aureus
Similarity: Not only are both fish popular and abundant food sources, but they taste very similar.

See also  How Fast Can A Crocodile Swim? [Faster Than A Human!]

Catfish have a long history with American soul food and are still a common dish today. Tilapia is also a very common food source, being very easy to farm.

In addition, the two fish are often used as substitutes for each other in cooking due to how similar they taste. 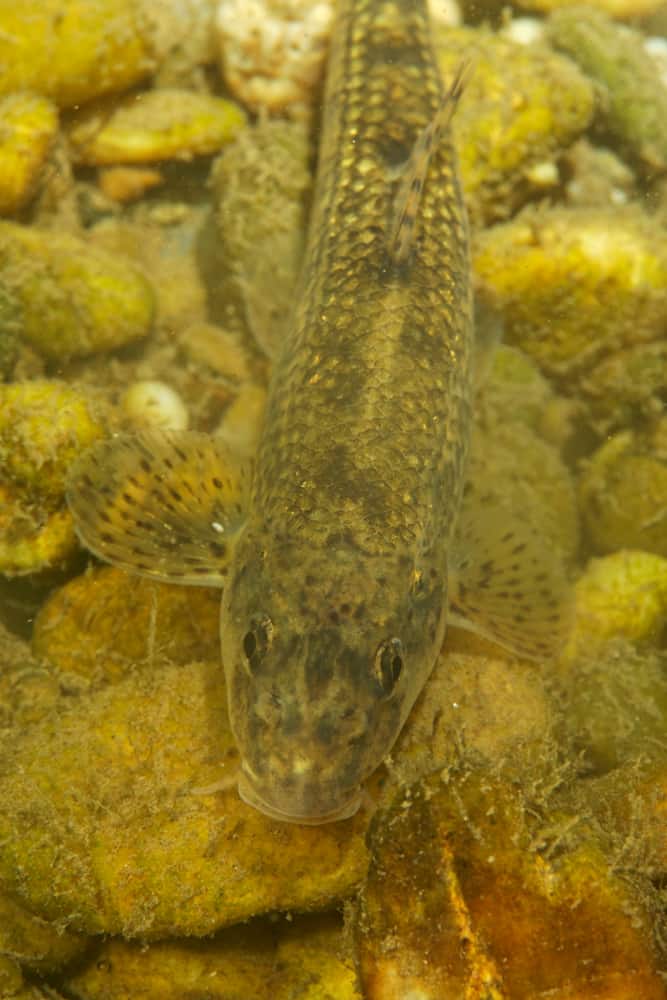 Scientific name: Barbus barbus
Similarity: Catfish and barbels have “whiskers” near their mouths which they use for bottom feeding.

The “barbel” in this fish’s name refers to the whiskery appendages near its mouth. These barbels are actually sensory organs that help the fish find food.

Catfishes also have long barbels, giving them their cat-like appearance. Both fish use their barbels to search for food at the bottom of their habitats where it’s hard to see. 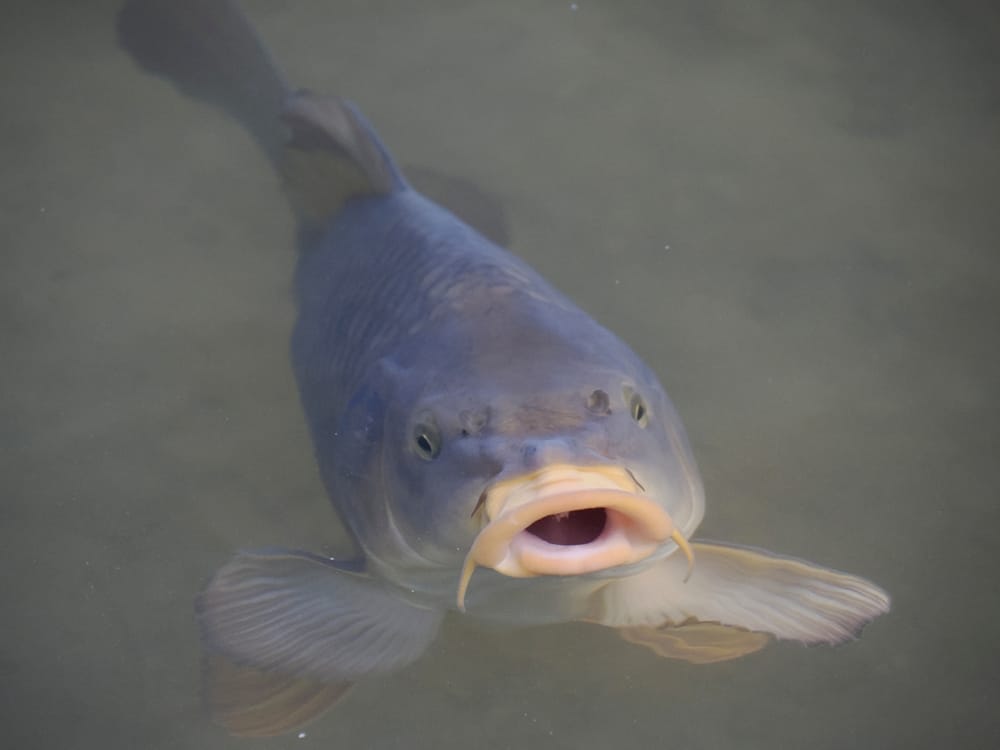 Scientific name: Cyprinus carpio
Similarity: Carp and catfish have taste receptors all over their bodies.

Catfish don’t just have taste buds in their mouth. They have an incredible number of taste receptors all over their bodies. This helps them find food in murky waters.

The common carp also has taste buds all over its body, though not as many as a catfish. They also share the same whiskery barbels as catfish, just much smaller. 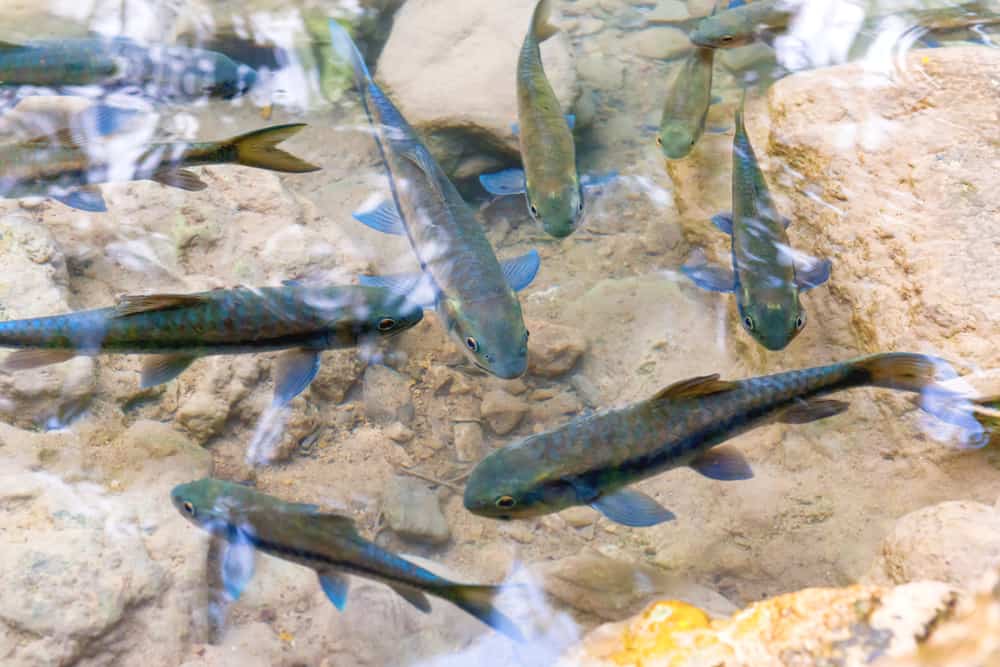 Doctor fish are very small fish that have delicate but tenacious feeding tendencies. They also go by the name “nibble fish,” as they’re small and use raspy plates in their mouths to eat.

They’re even used as natural exfoliators in some spas, sucking and nibbling away dead skin.

But they’re more often found at the bottom of rivers, using their small barbels to find food, just like catfish. 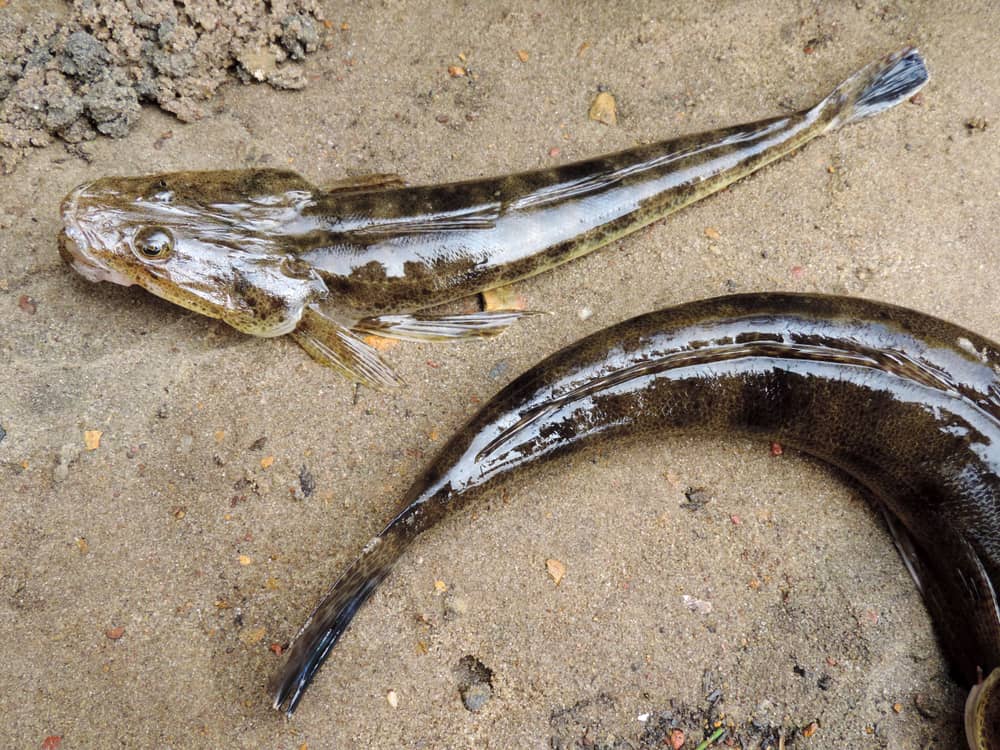 Scientific name: Platycephalus fuscus
Similarity: They not only have the same shape, but flatheads and catfish share similar feeding habits.

The flat head that gives these fish their common name is very similar to the shape of a catfish head. They’re both very angular, and they tend to have the same brownish coloring as well.

In addition, both catfish and flatheads like to feed at the bottom of their environments. Catfish like to eat plants, algae, and small crustaceans on the watery floor.

Flatheads are a little more aggressive, but still like to stay at the bottom. They will lie in wait, sometimes partially buried in the mud, for prey to pass by. Then they’ll ambush the small fish and crustaceans that pass by. 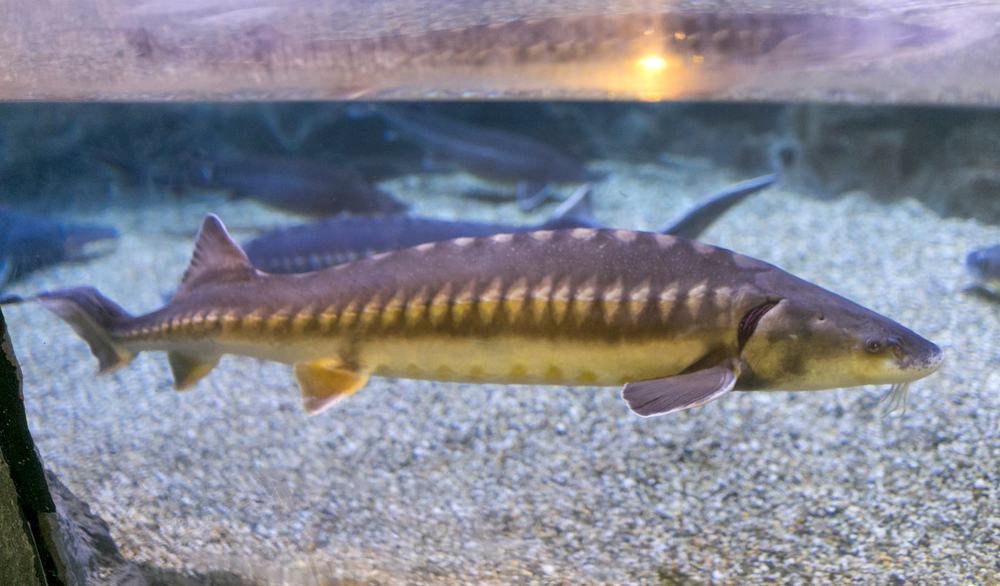 Scientific name: Acipenser sturio
Similarity: Another fish with noticeable barbels by its mouth and a long body similar to a catfish.

Sturgeons can live for a very long time, possibly up to fifty years. In that time, they can grow to about twenty feet long.

The wels catfish is also known for its longevity and size. They can grow to nine feet and live between 20 and 30 years old. One specimen lived for 80 years in the wild.

Both sturgeons and catfish both have long barbels near their mouths to help them find food. 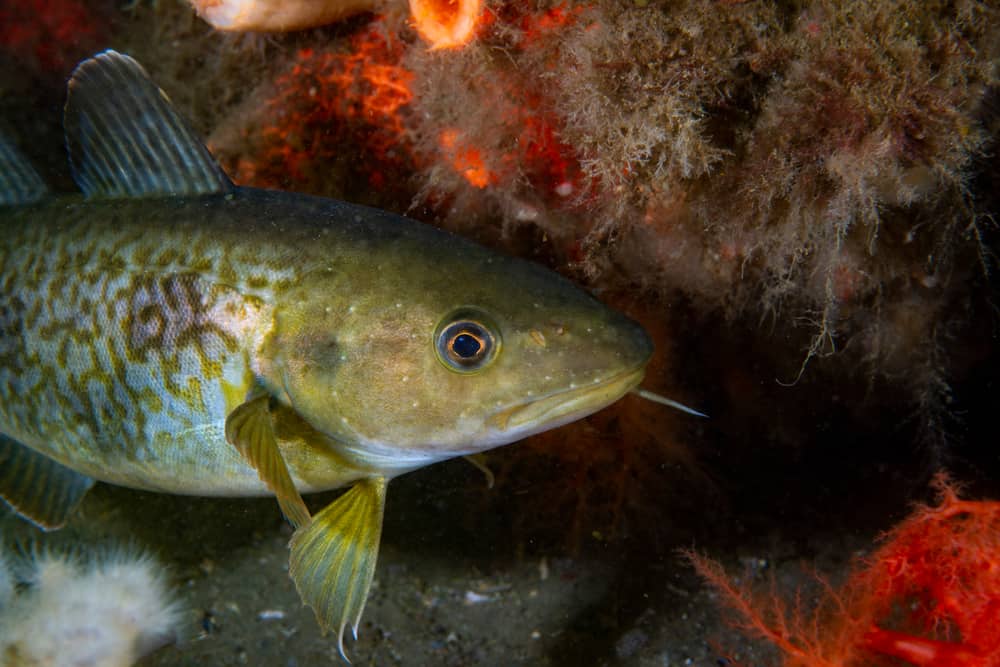 Scientific name: Gadus ogac
Similarity: This cod has a catfish-like barbel and feeds at the bottom of the ocean like a catfish.

Also known as ogac, Greenland cod lives in the cold of the Arctic continental shelf. They feed along the bottom of the ocean with a single long barbel.

A Greenland cod’s diet consists mainly of invertebrates such as shrimps or crabs. However, they don’t eat anything smaller like plankton.

Catfish also like to eat vertebrates from the bottom of their habitats. They will also eat plant algae and much smaller fish and invertebrates. 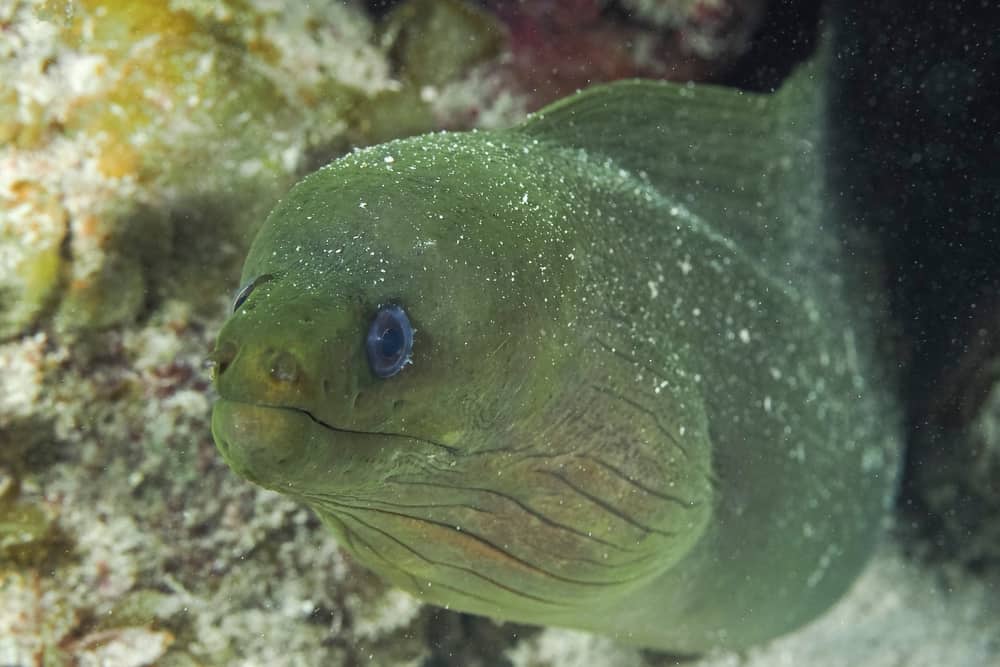 Scientific name: Gymnothorax funebris
Similarity: Neither catfish nor moray eels have scales; they either have slime, plates, or just skin.

Both catfish and eels are some of the only groups of fish that lack scales. Catfish either have just skin or armored dermal plates similar to those of a shark.

Green moray eels likewise don’t have scales. Instead, a thick mucus covers and protects their skin. This actually gives them their green color; their skin is actually brown. 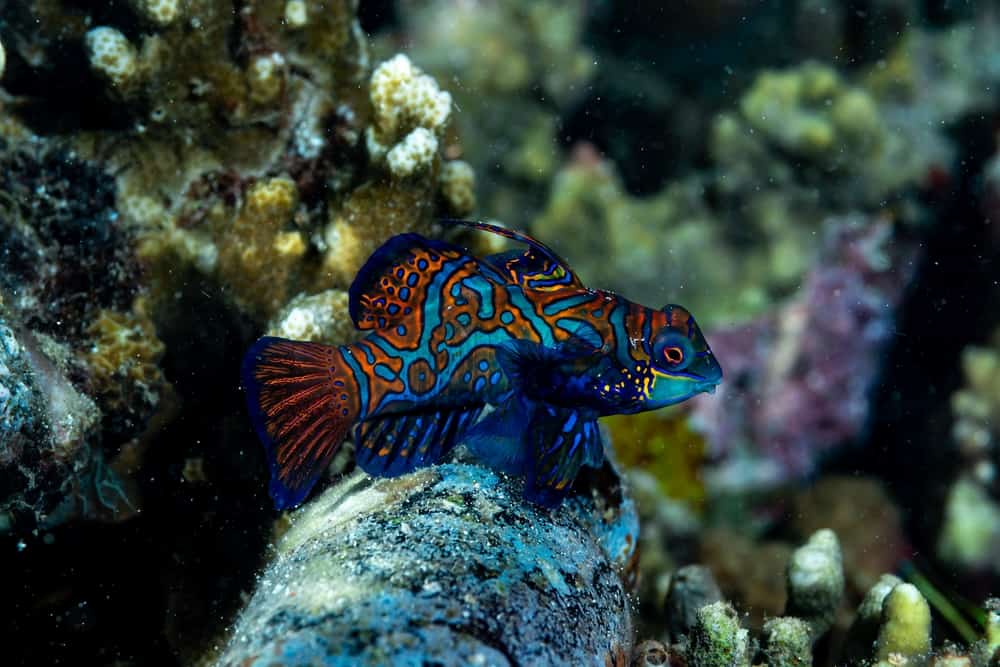 With its bold colors, it’s easy to see where the mandarinfish’s Latin name comes from.

But their vibrancy doesn’t come from scales. The mandarinfish’s bright skin is instead covered in a layer of bitter slime.

As stated above, catfish do not have normal scales either. At best, they have armored plates, but some don’t have anything covering their skin. 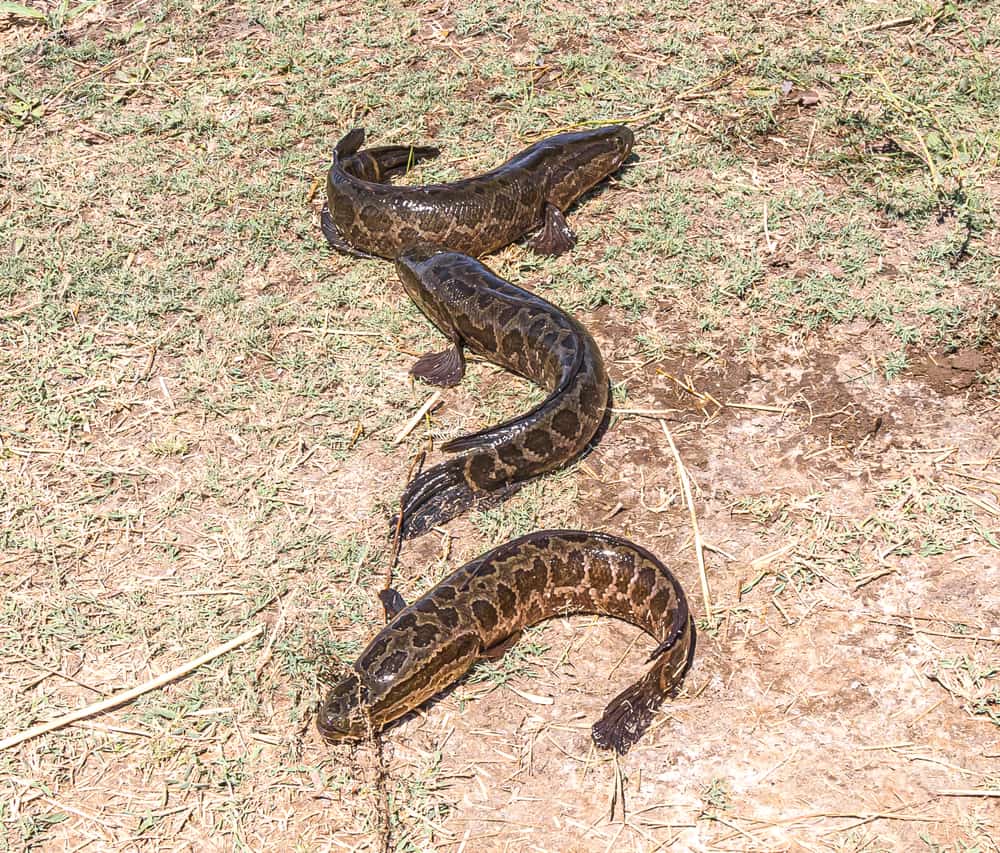 Scientific name: Channa argus
Similarity: Snakeheads can survive and move around out of water for days like the walking catfish.

It may be surprising that so many fish species can breathe out of water. The northern snakehead is another one that can move and breathe even on land.

They use a special chamber called a suprabranchial organ to absorb oxygen through their mouths. This is the same organ that walking catfish use. 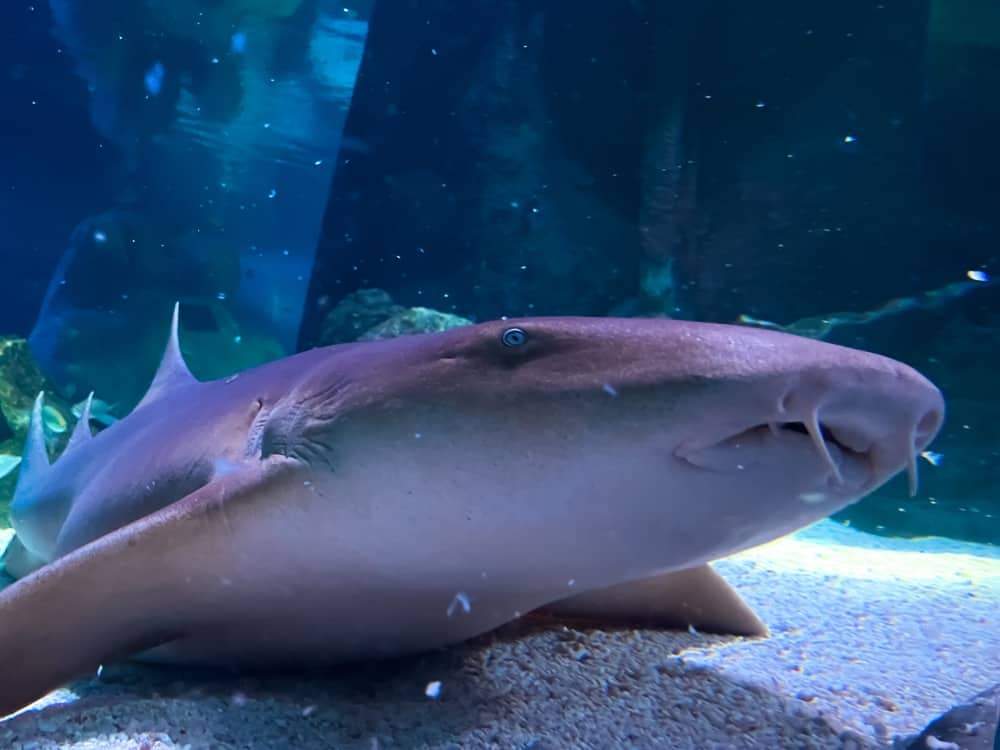 Nurse sharks don’t only have sharp teeth inside their mouths. They also have them covering their bodies. These “dermal denticles” are more tooth-like plaques than true scales.

This is like armored catfish such as the suckermouth, although their armor is not a type of scale at all.

Catfish and nurse sharks also have barbels by their mouths. However, nurse sharks only have a pair whereas catfish can have several. 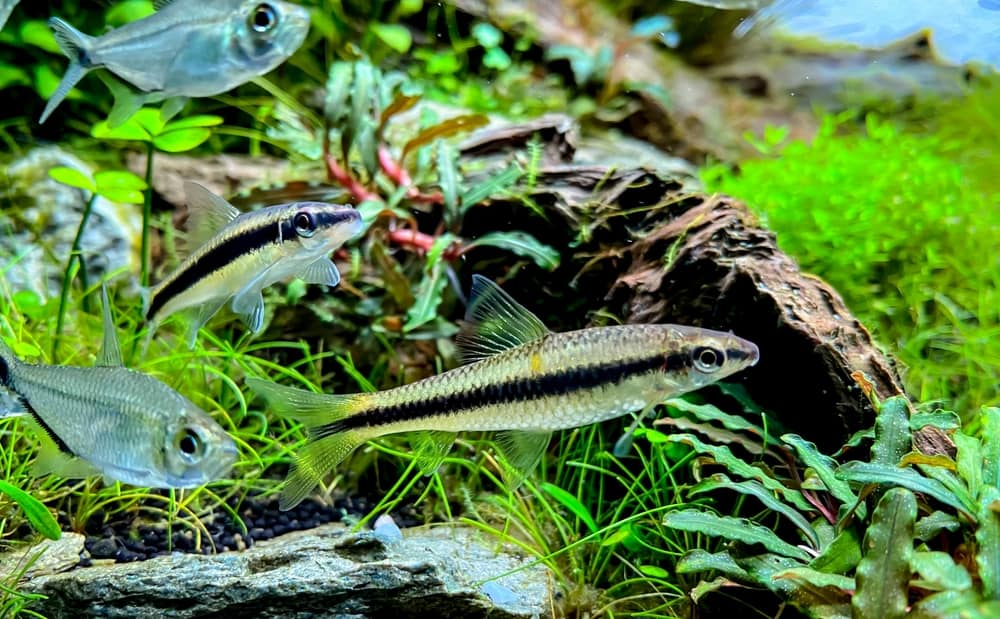 Scientific name: Crossocheilus oblongus
Similarity: Both catfish and these algae eaters use barbels to feed at the bottom of their habitats.

As you would expect from its name, the diet of a Siamese algae eater is mostly algae. They are bottom feeders in the wild, but also in captivity. In fact, they actually help keep aquariums clean.

Catfish are also bottom feeders, and both fish have barbels near their mouths to help them scour for food. 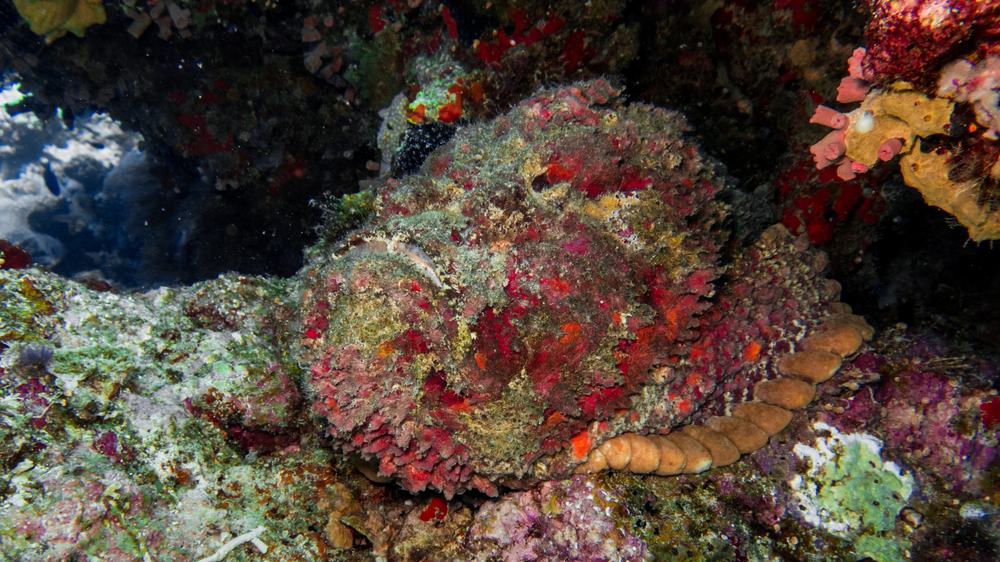 The stonefish is very hard to spot in the water. Its skin makes it appear just like a lump of rock or coral, right down to the texture.

This makes it very dangerous, because it is the most venomous fish in the world. It doesn’t bite or sting, but rather injects venom through its dorsal fin spines.

Surprisingly, there are some catfish that not only have venoms, but can also be deadly. More than half of all catfish species have venomous spines, and there are even reports of death. 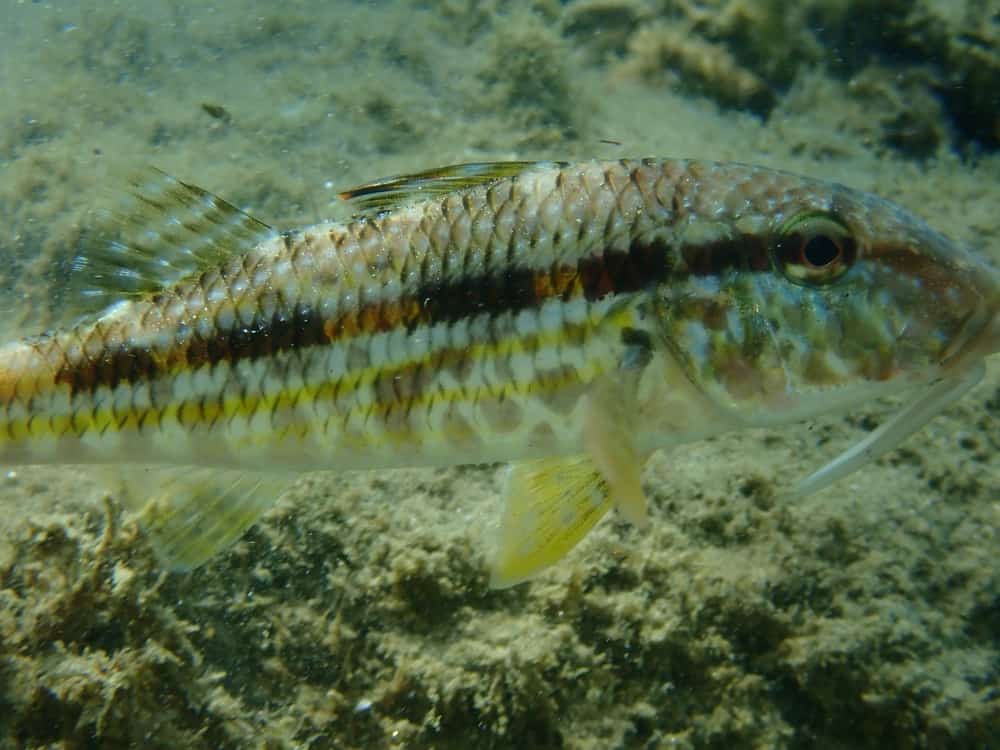 Striped red mullets favor crustaceans as their main source of food. In fact, their diet has such a narrow range that they can be called “specialist” fish.

To help them get the specific prey they want, these mullets use highly sensitive barbels. These help them dig through the muddy bottom of the water.

This is just like catfish, who are also bottom feeders. With less visibility deeper in the water, catfish and mullets need the extra sensory help their barbels provide. 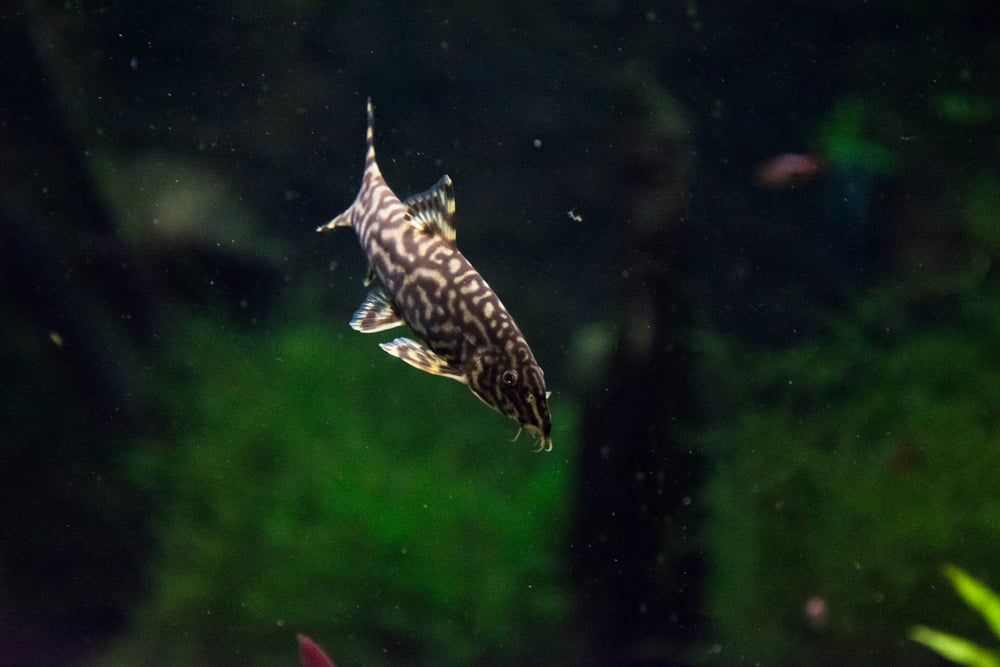 Yoyo loaches are part of the Cypriniformes order, which relies on advanced hearing and feeding evolutionary innovations. One of these is called the Weberian apparatus.

This is a special configuration of vertebrates and ribs that amplify changes in sound pressure to the inner ear from the gas bladder.

Catfishes also have this particular bone assemblage that makes them particularly sensitive to sound changes in the water.

Not only are there a vast number of catfish in the world, but there are several other fish species with similar traits. Many share the same feeding habits as catfish, as well as having the whisker-like protrusions for which catfish are famous.

Some have less obvious similarities, such as venomous spines and specialized hearing structures. But common or uncommon, there are catfish traits among all seventeen of the animals in this list.