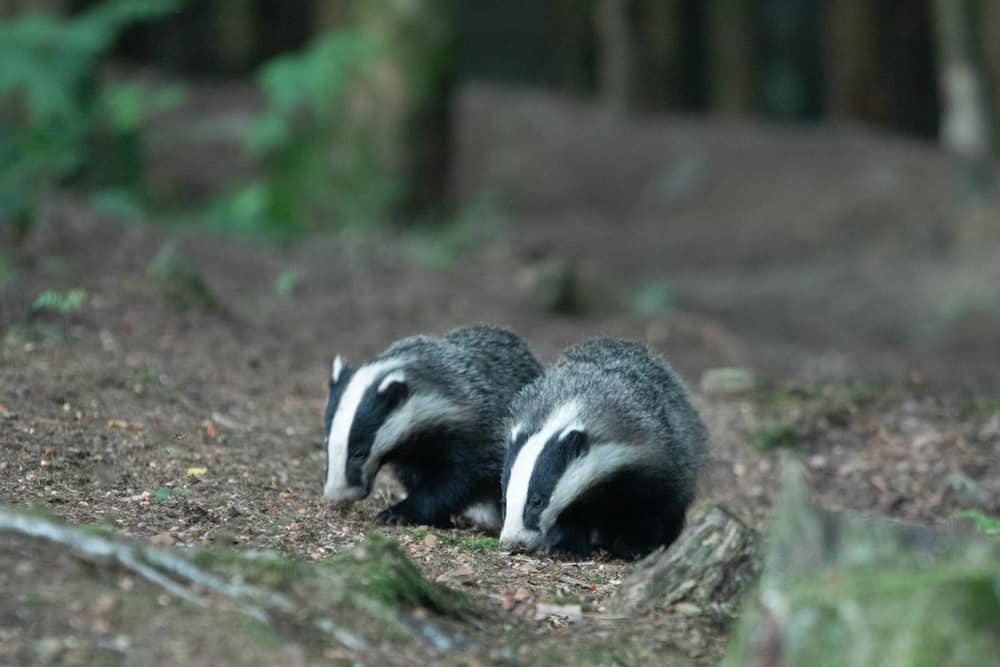 Badgers are small mammals known for their wedge-shaped bodies, black and white stripes, and adorable appearance. These animals are not usually aggressive towards people, although they can attack when threatened.

However, the badgers found in America are not the only ones. Their European cousins look pretty much alike, yet they are different.

The table below shows a quick overview of the main differences between American badgers vs. European badgers:

European badgers (Meles meles) – sometimes referred to as Eurasian badgers – and American badgers (Taxidea taxus) are not that closely related even though they both belong to the mustelid family.

Aside from their name, the two species have more differences than similarities.

While there aren’t important size differences between the European and American badgers, the former are generally larger.

Adult European badgers generally measure between 23 and 35 inches in length, on average. However, some of the largest individuals can reach a length of 41 inches. The tail can add another five to eight inches to the length.

American badgers are slightly smaller than the European species, with a body length ranging from 1.7 to 2.8 feet (20 to 33 inches). They are also shorter, standing at about nine inches tall on average.

Larger bodies are often synonymous with a higher body mass, and this is also true for the two badger species.

Due to their larger bodies, European badgers are heavier than American badgers. Unlike the size, though, the difference is substantial.

On average, European badgers weigh between 14.5 and 36 pounds. Males are heavier than females, with weights ranging from 20 to 36 pounds. Female hefts vary between 14.5 to around 30 pounds.

European badgers’ weight tends to fluctuate throughout the year; they are the heaviest in fall when they fatten up for the cold season.

Despite the minimal size difference compared to European badgers, American badgers are a lot lighter.

Their weight typically varies between 10 and 24 pounds. Some specimens may reach 26 pounds, but they are still lighter than the heaviest European badgers.

Like their European counterparts, American badgers gain weight in summer and fall, losing most of it during the winter months. 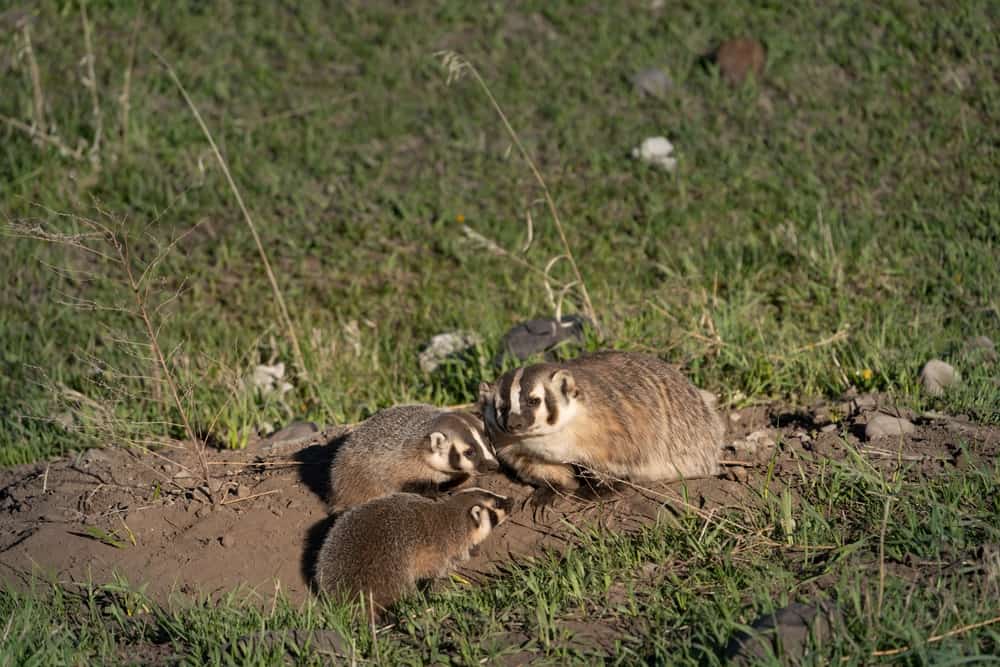 Both European and American badgers have stocky bodies with short legs. However, the latter are shorter overall, so they have shorter legs and generally look more flat.

Both species have triangular heads and long noses with an acute sense of smell. Typically, a badger can sense smells about 700 to 800 times better than humans.

Coat-wise, both badger species have distinctive marks and colors.

European badgers have a white head with two black stripes stretching from the sides of the nose over the eyes and to the ears.

These stripes are separated by a white stripe going from the tip of the nose overhead and then blending into the neck and back fur.

The sides of the face are also white, while the fur varies in color from gray on the back to black on the chest and legs. Slight color variations can be present between individuals. Overall, European badgers have a “gentle” appearance.

American badgers look much more aggressive than their European counterparts. They also have black markings on the head, but their stripes stretch from the tip of the nose overhead.

These two stripes are split by a thin white stripe that blends into the fur on the skull.

The ears are round – similar to those of European badgers – but they have a more lateral positioning on each side of the skull.

Another distinctive trait is that American badgers have a second set of stripes on their white cheeks. The coat is also a reddish gray in color rather than gray-black.

As their name suggests, American and European badgers live in different parts of the world.

Badgers can be found all over Europe and the UK, including Scandinavia. They are also present in Russia, China, and Japan – although other badger species can also be found in parts of Asia.

American badgers majorly live in North America, including Canada and the USA. However, their geographic range stretches into Central America.

Another difference between American and European badgers is the habitat.

American badgers prefer open areas, including plains, prairies, wood edges, and farmlands. They are not particular about the altitude, their range going from alpine meadows to sea level.

European badgers can also live in open areas, but they mostly prefer woodlands, such as deciduous, coniferous, or mixed forests. They are also found in agricultural lands, suburban parks, or large hedgerows with access to water.

This habitat choice makes it easier for European badgers to hide in case of danger.

While all badgers are primarily carnivores, there are differences between European and American species as far as food preferences are concerned.

European badgers are carnivores, but they are also particularly good foragers. Their diet mainly consists of invertebrates, such as slugs, snails, insects, nuts, seeds, and fruits.

They can also hunt and eat small mammals, including rodents, birds, and even amphibians. However, it’s safe to say that their diet is omnivorous.

They are also known for eating birds, amphibians, and insects, including bees. Honeycombs are also high on their preference list.

European badgers are one of the few types of mustelids that have a social behavior.

They live in groups that can vary in size from two to 23 individuals. Group sizes vary based on resource quality and abundance, but most groups have up to six adults and their offspring.

The foraging and hunting behavior is mostly crepuscular and nocturnal; in periods of scarce food availability, however, European badgers may turn to a solitary lifestyle.

American badgers are solitary creatures that only come together during the mating season. Social groups are rare and consist of a mother and her offspring.

Like European badgers, American badgers are nocturnal or crepuscular animals.

European and American badgers alike are mostly active in the warm months and tend to become inactive during winter. However, they are not true hibernators and can emerge from their dens on warmer days.

See also  Hippo Vs. Tiger: Who Would Win? [Comparison & Facts]

Both European and American badgers are polygamous and breed once per year.

The breeding season peaks between February and May and then again between June and September for European badgers. American badgers mate in late summer or early fall.

Aside from the different breeding seasons, the two species have other reproduction differences.

European badger females, for instance, decide whether to reproduce or not based on population density.

Both European and American badgers can delay implantation after fecundation so that they can give birth during the most appropriate months.

European badgers have a gestation period of up to 12 months; American badgers of six weeks. Both species give birth to up to five or six offspring and wean their young around two to three months after birth.

A similarity between European and American badgers is their longevity, even though European badgers live slightly longer.

In captivity, both species can live up to 25 years.

European and American badgers alike are abundant in the wild. Neither of the two species is threatened, and they are both labeled as least concerned. However, badgers are protected in some areas.

Badger hunting and trapping are legal almost everywhere across the US, although hunting seasons and regulations might vary from state to state. That said, some states allow year-round hunting and/or trapping.

Of all European states (including the UK), over 30% ban badger hunting and protect the species despite its abundance.

These countries include Italy, the UK, Spain, Portugal, and Belgium. In all other countries, hunting is permitted, but the season varies from two to eight months. Only 2.1% of countries allow year-round hunting.

European and American badgers are similar animals, but there are much more differences between them than the geographical range and habitat.

European badgers are larger and heavier, have an omnivorous diet, and mostly live in woodlands. American badgers prefer open areas, such as plains, and are primarily carnivorous.

Both badger species have similar reproductive behavior, but the European ones live in groups, whereas American badgers are mostly solitary.