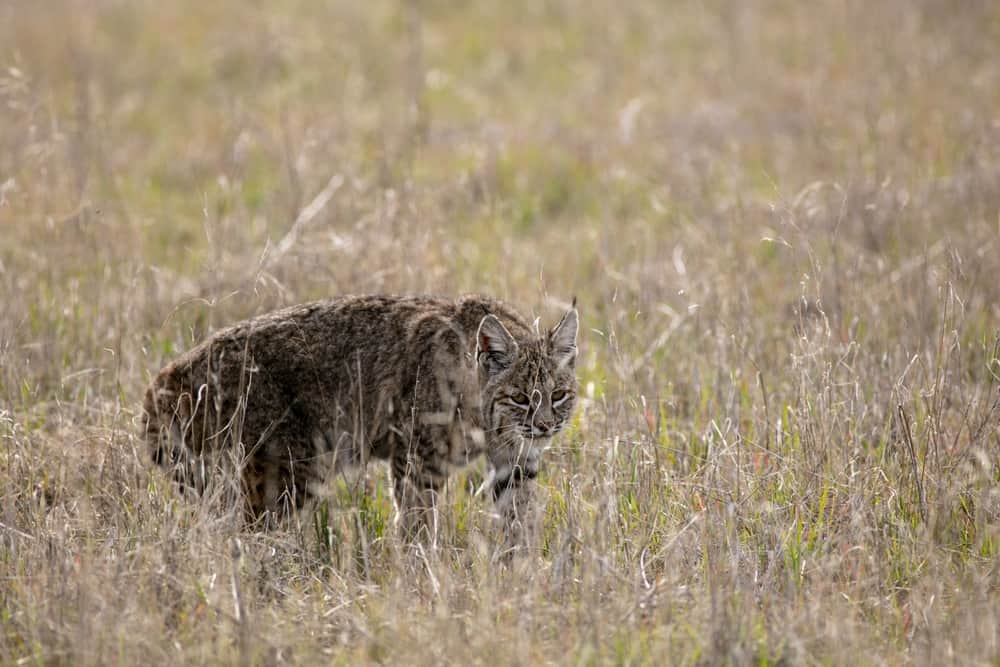 Bobcats are known for being fierce hunters, even though they look adorable enough that many people wonder whether they could keep them as a pet.

One thing that sets bobcats apart from many other cat species (and gives them their name) is their distinctive tails.

Bobcats have short, bobbed tails of two to eight inches that are black on top with a white underside. There are many theories as to why bobcats’ tails are shorter than most other cats, including their hunting method, a genetically neutral mutation passed down through generations, and a side effect of genetic selection for longer, stronger hind legs.

This article will discuss the characteristics of a bobcat’s tail and theories as to why bobcats have bobbed tails. It will also compare bobcats’ tails to those of other cat species.

The bobcat’s name comes from its tail’s “bobbed” appearance. Bobcats’ tails make them easily distinguishable from other similar-looking large cats.

While various sources report different lengths for the average bobcat’s tail, they all agree that it’s shorter than the typical cat tail.

This article states that bobcat tails range from four inches to seven inches in length, while this one says bobcats’ tails are typically two to eight inches long.

Bobcats’ tails are a combination of black and white. Their tails are black on the top and white on the bottom or underside.

Aside from its signature bobbed appearance, the bobcat’s tail colors set it apart from other cats.

Why Do Bobcats Have Short Tails?

While scientists and researchers have not yet concurred on a specific reason why bobcats have short tails, they do have many theories.

One theory has to do with the fact that bobcats hunt mainly on the ground and don’t often climb trees. When cats with longer tails climb trees, they use their tails for enhanced balance. Bobcats don’t need this enhanced balance and thus evolved to have shorter tails.

To go along with this, long tails may be noticeable to prey, while short tails aren’t as likely to alert prey to a predator’s presence.

Another theory is that the bobcat’s short tail was initially an evolutionarily neutral mutation, meaning that it didn’t have any notable positive or negative impacts.

This short tail continued to be passed down throughout the generations.

A third theory is based on the observation that the white underside of the tail is used as a banner to guide juvenile bobcats during travels.

The person who shared this theory noted that the length of the tail might not be as important or functional as its distinctive coloring.

It’s also possible that bobtails are ideal for cold climates because they reduce the cat’s overall surface area and thus its opportunity for heat loss. A lack of a long tail could also decrease body weight and prevent the cat from sinking into the snow.

However, bobcats typically live in warmer climates, so this theory may be more applicable to lynxes, which have similar short tails.

Side Effect Of Selection

Finally, bobcats, as well as caracals and lynxes, all have higher rumps and longer hind legs.

It could be that the genetic selection for long, powerful hind legs resulted in the side effect of a shorter tail.

Bobcat Tail vs. Other Cats

Looking at a bobcat’s tail in comparison to other cat tails can help us understand the differences between various cat species.

Although these cats have a lot in common, they have plenty of distinctions, too!

Lions have long tails with black tassels on the end, which are often used to lead other lions through tall grass. Lions’ tails range from 27 to 41 inches long. A lion’s tail position can indicate its mood and constitute a method of communication.

It’s possible that bobcats also use their tails to lead each other as they travel across various landscapes, but bobcats do not have black tassels on their tails.

Instead, the top of a bobcat’s tail is black, and the underside is white. Bobcat tails are much shorter than lion tails as well.

Bobcats do not generally use their tails for balance as they are much shorter–only eight inches long at the most, which is less than one-quarter of the length of a tiger’s tail. 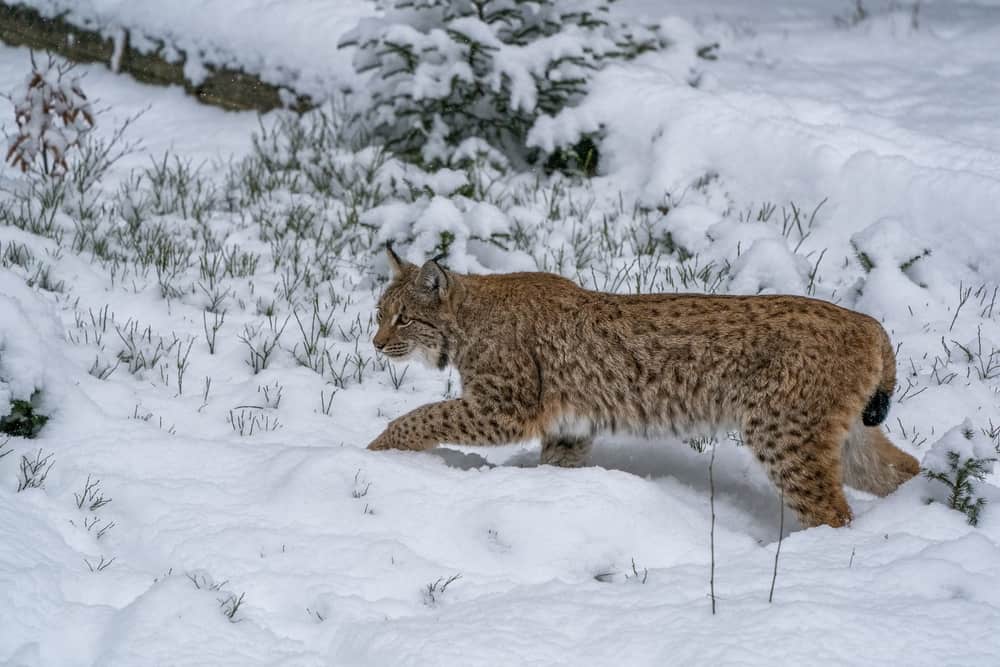 Lynxes are the most similar to bobcats because they also have a short or “bobbed” tail. Lynxes’ tails are usually four to eight inches long. However, the main difference between lynxes’ tails and bobcats’ tails is their coloring.

The tip of a lynx’s tail is completely black. Meanwhile, a bobcat’s tail is entirely black on the top and white on the bottom.

Jaguars have medium-length tails in comparison to the other cats discussed here.

Their tails are longer than bobcats’, at around two feet long, but shorter than the tails of lions and tigers. 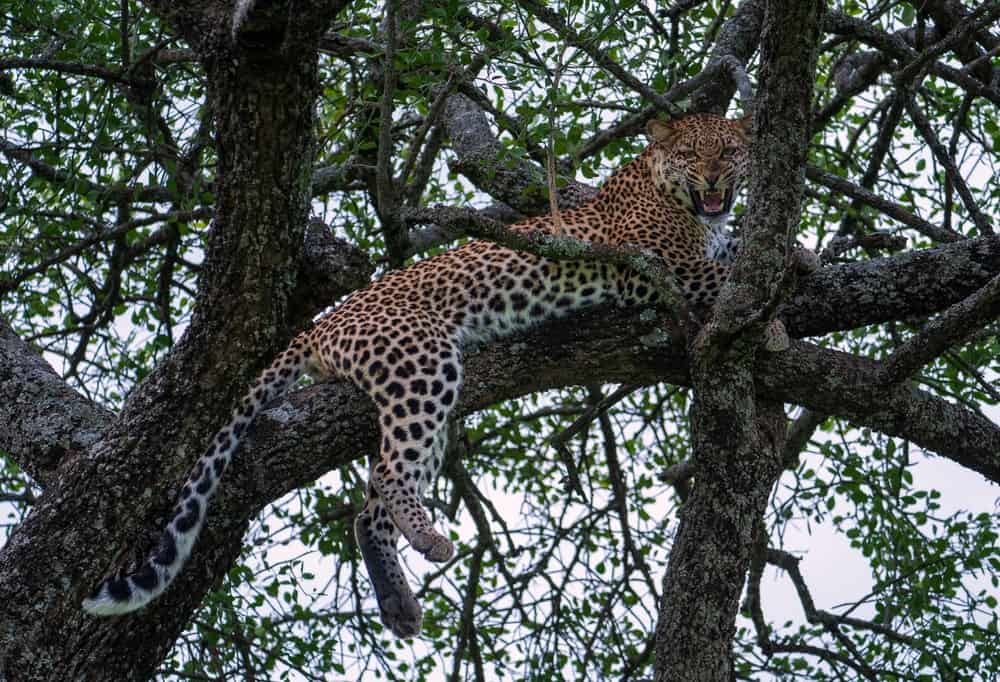 Leopards have the longest tails of the cats mentioned in this article; they can be up to 3.6 feet long. Although this is much longer than a bobcat’s tail, leopard and bobcat tails do have something in common.

Both tails have white undersides that can guide offspring while traveling.

Cheetahs’ tails are usually between 26 and 33 inches, and they feature a series of black rings around the last third of the tail. Cheetahs often use their tails for balance while hunting and making sharp turns, much like tigers.

Bobcats’ and cheetahs’ tails don’t have much in common; the length, coloring, and functionality of their tails are completely different.

Bobcats have tails, but they’re much shorter than the typical cat tail. In fact, their tails’ bobbed look is where the name “bobcat” comes from. A bobcat’s tail usually ranges in length from two to eight inches long. Its coloration is black on the top and white on the bottom.

Theories abound as to why bobcats evolved to have short tails. It could be that the short tail was a genetically neutral mutation that was passed down through many generations.

It’s also possible that the genetic selection for longer, stronger hind legs resulted in the side effect of the bobcat’s tail growing shorter.

Another theory is that bobcats don’t require a long tail because they don’t climb trees as often as cat species with longer tails that use them for enhanced balance.