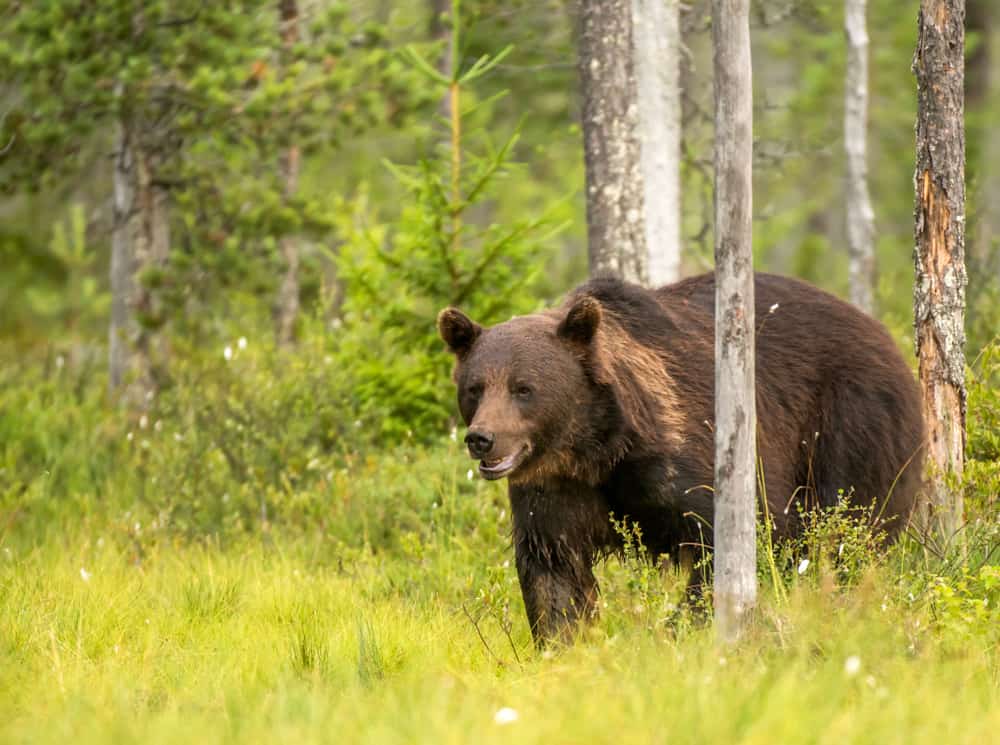 Bears are foragers, predators, and opportunistic feeders. These intelligent mammals come in different sizes and colors, seeking a variety of sources for nourishment.

Deer exist in the same habitats as bears, and therefore can be a source of food for the latter. Several species of bears primarily consume insects, vegetation, and small mammals. They tend to eat carrion, such as that of deer, instead of actively hunting them. However, black (Asiatic and American), brown, and polar bears are predators that will hunt and kill species of the deer family.

Evidence of deer consumption has been found in bear scat. Read on to learn more about the different species of bears, their habitats, and what they eat.

Deer And Bear Coexistence In Habitats

Deer can be found all over the world, except for Antarctica. Deer are Cervids, which include moose, elk, reindeer, caribou, white-tailed deer, and more.

Even though bears have heavy builds, stocky frames, and an awkward gait, they can adeptly run, swim, and climb as they search for food.

Deer tend to avoid areas with bears, although they do live in the same kinds of habitats. They will graze where bears have been but stay away when active bears are around.

The black (Asiatic and American), brown, and polar bears will actively hunt and prey on deer. The other species tend to eat insects or a large vegetation diet and are opportunistic feeders eating deer carrion, instead of hunting them.

How Bears Kill And Consume Deer

Bears, such as the American and Asiatic Black, brown, and polar will actively hunt deer.

Bears will commonly prey on vulnerable or younger deer calves and other hoofed wildlife since they are smaller and easier to capture.

Predator bears will bite the neck of prey to kill it or use a forepaw to strike an animal breaking its spine. Visible claw marks can be seen on the body and mauled marks on the hind. A bear may also grab the snout with its powerful jaws.

The bear will feast on the meaty chest and guts first, working down to the hips of the carcass.

For larger deer species, such as moose, or if there are leftovers, a bear will guard the carcass. It may also bury it with leaves, moss, or snow, or conserve it in running water for upcoming meals.

There are eight species of bears belonging to the Ursidae family. Bears are found in the wild in North and South America, Europe, and Asia.

Bears are technically carnivores, but tend to have omnivore diets. They seek out food sources in their habitats, which will vary globally.

While deer are not the main source of meat for all bear species, they can eat deer as prey or carrion.

The table below gives further detail about all eight species of bear with specifics on what they eat, and where they live.

Black (Asiatic and American), brown, and polar bears will actively hunt live deer, whereas other species will consume carrion.

Bears are opportunistic feeders eating a variety of food sources. This includes preying on young, old, or weak animals, or finding sources such as human garbage.

All of the bear species are capable of eating meat, however, some consume considerably more vegetation in their daily diets.