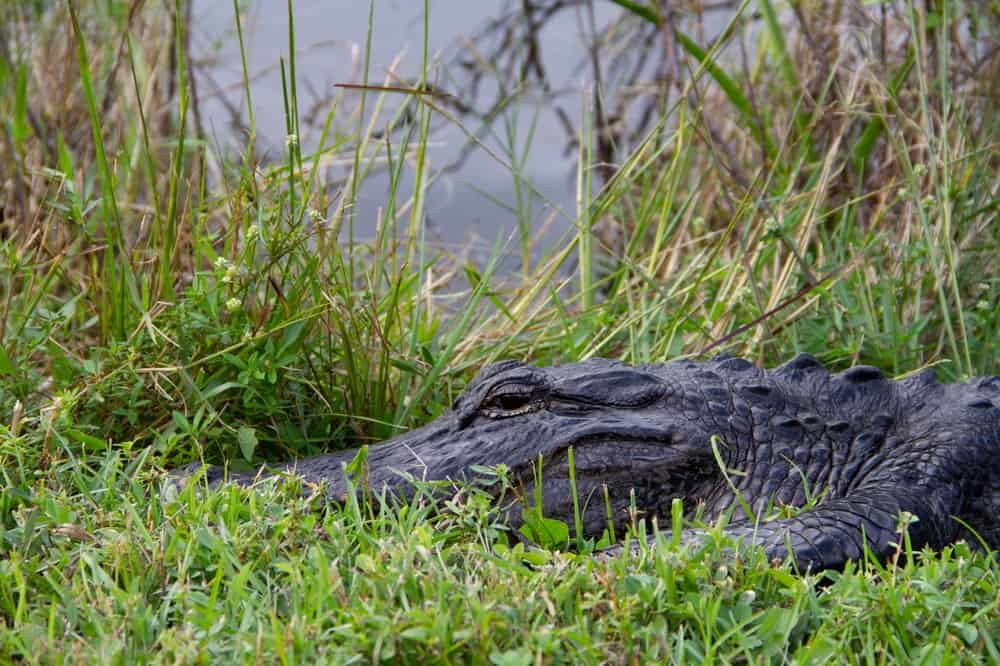 Alligators, like other large reptiles, shed their skin. This process continues as they age.

However, unlike other reptiles, alligators and crocodiles shed their skin slowly, one large scale at a time.

Why Do Alligators Shed?

Alligators shed their skin because it’s part of their biological process. As the animal matures, skin sheds, and new skin forms to protect it.

While experts are still unsure, they estimate that American alligators live between 30 to 50 years old.

An adult male alligator stops growing between 25 and 30 years of age. Alligators replace their shedding skin with new tough and hard scales to protect against water loss. Their scales are called scutes.

Alligator scales are massive and separate. They aren’t fused to the underlying skeleton.

Interestingly, the scales on an alligator’s back are larger than the others. This is to protect them from the sun.

Since they aren’t fused, alligators are flexible and fast.

How Often Do Alligators Shed Their Skin?

Alligators never stop shedding their skin. The process is slow and starts with one scale at a time.

This is very different from snakes and other reptiles that shed or molt their skin 1 to 2 times a year. 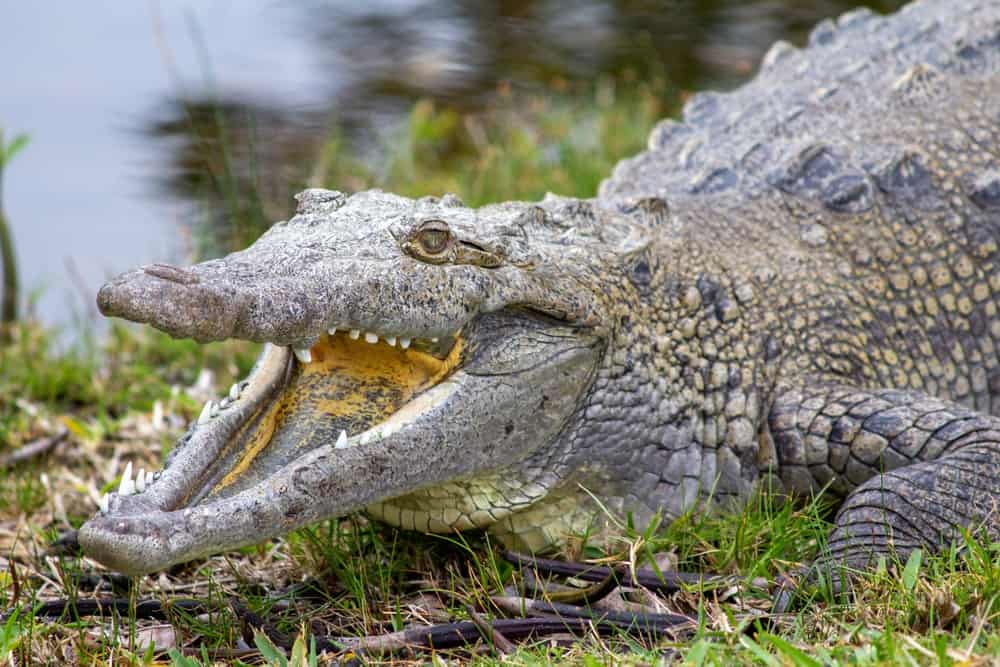 Did you know alligators also ‘shed’ their teeth? American alligators have about 80 conical-shaped teeth. They don’t have back molars to chew their food and instead swallow their meals whole.

However, alligator tooth loss is common. Alligators can replace nearly 3,000 teeth in their lifetime.

It’s common to lose their teeth with age or while hunting larger prey. Alligator teeth get caught and fall out as they bite and shred their prey.

Alligators can regenerate a lost tooth in the same area 50 times. Once an alligator loses a tooth, a tooth in waiting starts maturing and the stem cells form a bulge where the new tooth is waiting.

The Toughness Of Alligator Skin

Alligator skin is tough. For thousands of years, it has been used as leather for clothing, saddles, and more.

This started with the Native Americans, however, it wasn’t popularized until the 1800s when European settlers hunted alligators using their skin for practical reasons.

Despite the rumors, alligator skin is not bulletproof. But it can withstand some gunfire including a 9mm bullet and a . 45 caliber.

They have thick skin, which protects them from the sun and water damage. It also helps them during fights in the wild.

While alligators are apex predators, some prey fights back, scratching and biting an alligator so they don’t get dragged underwater.

Although alligators are heavily armored, they are sensitive to touch. Alligator skin when treated and dried into leather is very durable.

Alligator skin is not easy to come by, even if there are millions of alligators in the wild.

The tougher, thicker, and larger an alligator is, the older they are. It’s more common for anglers to catch younger and smaller alligators than larger and older alligators.

Alligators Vs. Other Reptiles

How do alligators hold up against other reptiles?

Do they shed the same? Are they able to win in a fight?

Crocodiles are like the cousins of alligators. They share the same taxonomic order called Crocodylia but belong to different families.

Crocodiles also have tough skin, which they also shed one scale at a time. Crocodiles are smart, they rub their bodies against tree branches and trunks, and other rough surfaces.

As the individual scales fall off, new thicker ones take their place.

Although alligators and crocodiles share a lot of similarities, crocodiles are much larger. They are also more aggressive.

There are at least 1,000 fatal crocodile attacks a year, compared to a handful of fatal alligator attacks in the world. This is more common with saltwater crocodiles and Nile crocodiles.

Geckos are a lot smaller than alligators. Most species grow between 1.2 to 6 inches and about half of their length is their tail alone.

Geckos are bright green, adorable, and eat insects. Some are friendly around humans, often getting stuck inside buildings.

Geckos shed 1 to 2 times a month when young, but as they grow older, their shedding becomes more infrequent. For example, adult geckos only shed once every 4 to 8 weeks.

Komodo dragons won’t win a fight against a hungry alligator, but they are still large and impressive reptiles. They are the biggest and heaviest lizards in the world. They are also one of the only venomous lizards.

They are heavy eaters and use their long, sharp teeth to serrate and chew prey. However, even though their teeth are sharp, alligators can still bite and latch onto them.

Komodo dragons shed in a similar process compared to alligators.

They don’t shed all their skin at once, molting like a snake. Instead, Komodo dragons shed their skin in small patches. Typically, they shed during spring and summer at higher rates.

See also  Do Otters Build Dams? [No! Here’s What They Do]

While sea turtles are often confused for amphibians, they are actually reptiles.

Sea turtles molt. All aquatic turtles molt, although it looks different for each species. However, more commonly, sea turtles shed their skin and shell.

This is crucial as they grow to ensure they have enough room in their shells. As the turtle’s shell grows, the scutes on the shell naturally shed or peel away, revealing new scutes.

This is essential because turtles use their shells to protect them from large predators.

Iguanas are herbivorous lizards in the Americas, the Caribbean, and Mexico. They live in tropical areas and grow between 5 to 7 feet long.

A big part of their length is their tail. Depending on the species, their weight varies.

Iguanas shed about 1 to 2 times a year. It’s common for iguana pet owners to mist or soak their skin while they are shedding so it doesn’t get stuck and remain.

In the wild, iguanas only shed as they grow, which slows down in adulthood. Baby iguanas shed every 4 to 6 weeks since they grow fast.

Some iguanas also shed their tails. Iguanas and bearded dragons ‘drop’ their tails and regrow them. It is a common defense mechanism when they are grabbed by prey.

The tail quickly separates from the rest of the body from a natural fracture line. The movement is quick, painless, and done to distract predators.

Overall, alligators shed their skin throughout their life. However, unlike other reptiles, they don’t molt their skin in one go or during a specific time of the year.

Instead, alligators slowly shed their skin, one scale at a time.