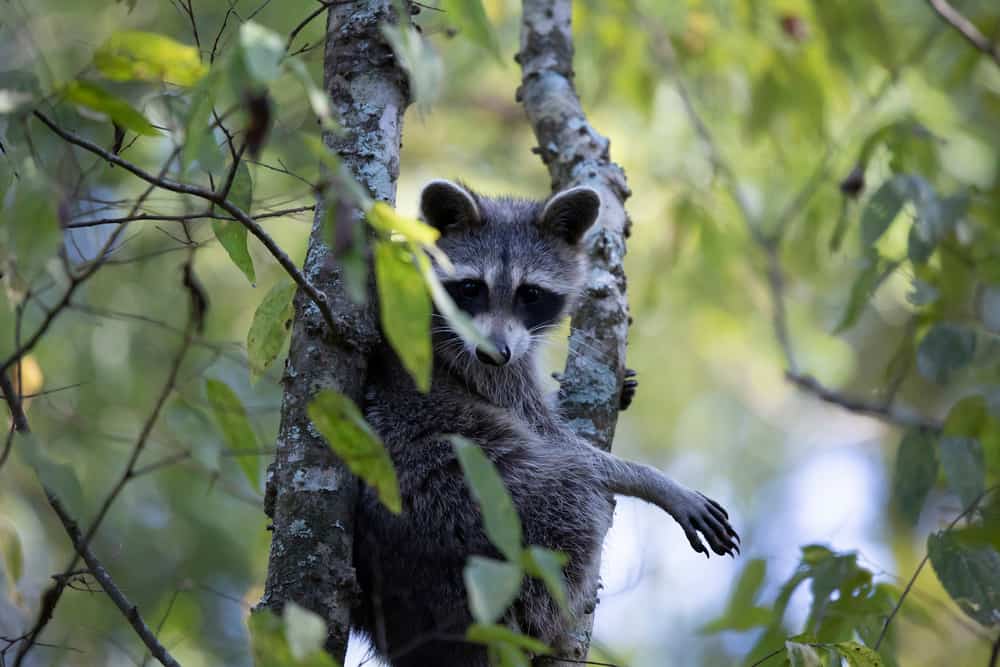 Raccoons are small, furry animals common in the United States and throughout North America. Like other mammals, if a raccoon suffers an injury, it can heal itself with new skin or even repair an entire organ.

But can it regrow a lost limb?

Raccoons cannot regenerate limbs once they are lost. There are no mammals that are capable of regeneration. Their biological system is thought to be too complex for entire limb regrowth. Most animals who can regenerate limbs are invertebrates, although there are a handful of vertebrates that have the ability as well.

Raccoons are a mammal with 23 subspecies native to North America. They average between 2 to 3 feet and weigh 4 to 23 pounds. They’re omnivores, and they’ll eat almost anything.

They walk on four legs, although they can stand up on their hind legs if they need to, similar to bears. They have gray fur over most of their bodies, but they also have distinctive patches of different colors in certain areas.

Raccoon tails feature 4 to 6 rings of black fur, and their eye area also has black fur. This is known as a “bandit-mask” due to its resemblance to old-fashioned disguises. This mask is highlighted by white fur above a raccoon’s eyes and around its nose.

Baby raccoons are born via live birth to their mothers in litters of 3 to 7. They’re mostly solitary creatures, and only stay with their mothers for the first winter.

They become independent by the following spring, and typically only join up with other raccoons again during the breeding season.

No Mammal Can Regenerate Lost Limbs

Because a raccoon is a mammal, it is incapable of regenerating any lost limbs. There are currently no known mammals that can regrow limbs.

Even among non-mammalian vertebrates (animals with a spine), regeneration is a rare ability. It’s thought that mammals are not able to regenerate because our biological structures are too complex.

Unfortunately, that’s the extent of our regenerative abilities. It requires advanced biological controls to ensure that anything more complex than these few systems don’t grow out of control.

Which Animals Can Regenerate Limbs?

Most full regeneration abilities are found in invertebrates such as flatworms, starfish (or sea stars), or arthropods.

However, there are a few vertebrates that can regrow limbs as well, though some grow out of the ability as they age.

Frogs are able to fully regrow any lost limbs while they’re tadpoles. However, this ability is gradually lost as they reach adulthood.

Lungfish can also regenerate their front and back fins. However, the details of this process have not been the subject of as much study as salamanders.

Salamanders are the most well-known and well-studied tetrapods (vertebrate animals with four limbs). They have the ability to regenerate full limbs in a matter of weeks. They can also do this throughout their entire life, unlike frogs.

The Mexican axolotl, a specific species of aquatic salamander, can even regrow various internal organs. This species is the subject of the majority of studies on regeneration.

Zebrafish have also become a main source of regeneration studies. These fish can regrow their fins, and the rapidity of the regrowth makes it easier to study. Zebrafish can also regrow several organs, including the brain, kidney, liver, and heart.

Regeneration is a common attribute of many invertebrate species, much more than vertebrate animals.

The list of invertebrates that can regenerate include, but are not limited to:

These animals have an array of regenerative abilities. Some can even regenerate an entire organism from a small amount of leftover material.

How Does Limb Regeneration Work?

It’s difficult to pinpoint the pattern behind which animals can regenerate and which can’t, but the process itself is well-documented in certain animals. The axolotl in particular has been studied with great frequency.

The axolotl’s regeneration process for lost limbs is a complex one. First, the blood at the site of the wound clots, and then a layer of cells forms a structure known as a “wound epidermis,” a thin layer of cells covering the wound area.

Over a few days, the wound epidermis cells quickly grow and divide, and then the cells underneath do the same, forming a “blastema”. This is a formation shaped like a cone protruding from the limb.

The cells of the blastema continue to grow and multiply until they become identical to typical bone, skin, and muscle cells.

Finally, the blastema flattens out until it resembles the lost limb, including the necessary nerves and blood vessels it needs to connect to the rest of the axolotl’s body.

Further studies have found that the immune system plays an important part in the regeneration process. Cells known as macrophages are also important.

We associate macrophages with inflammation responses. Removing these cells before amputating the limb of an axolotl leads to scarring instead of regrowth.

An axolotl can regenerate their limbs up to five times, although the effectiveness of the process lessens each time.

Limb regeneration is an attribute not available to mammals, including raccoons. Raccoons may not be able to regrow a limb once it’s lost, but they do still have some regenerative abilities similar to our own. They can grow scar tissue and heal broken bones.

No mammal can regrow an entire limb, and only a few vertebrates in general can do it. The ability lies mainly with invertebrates. However, the axolotl salamander is a vertebrate animal well known for being able to regenerate.

The regeneration process is complex but beneficial to the animals capable of it. Mammals like raccoons and humans have to adapt to their lost limbs instead.