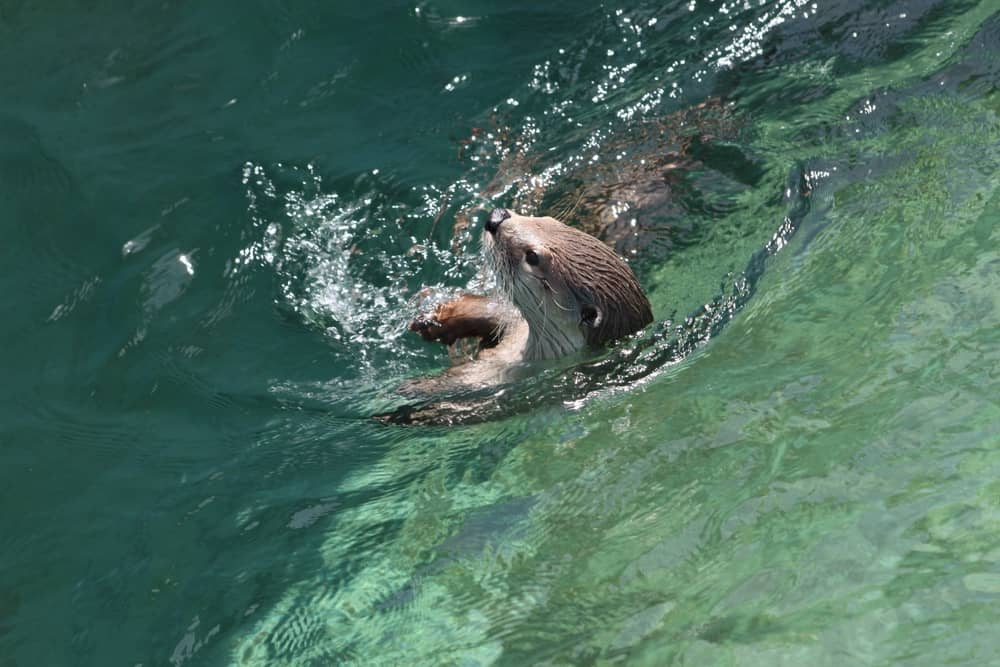 Otters are seen diving and swimming with aerobatics to catch prey underneath the water’s surface. Several minutes can pass by before the otter’s head pops up above the surface.

This gives the assumption that beavers might breathe underwater. However, this is not true.

Otters cannot breathe underwater, because, like other mammals, they have a respiratory system involving the lungs. Otters break through the water’s surface and breathe air through their mouth and nose. The air then moves through respiratory organs to reach the lungs and bloodstream. An otter has a large lung capacity that allows it to stay underwater for 5 to 8 minutes (sea and river otters, respectively).

Read on to discover more about the anatomy of an otter’s respiratory system, and why water is so essential to their survival.

Otters cannot obtain oxygen directly from water, since they do not have gills, like fish. They are mammals, belonging to the Mustelidae family, which also includes badgers, polecats, weasels, martens, ferrets, and wolverines.

Therefore, otters have respiratory systems to utilize oxygen from the atmosphere, coming to the surface of the water to obtain it.

The two subspecies of the river (freshwater) and sea otters are morphologically similar.

About The Otter’s Respiratory System

Let’s take a closer look at the functioning of the otter’s respiratory system.

Otters breathe in air through their mouths, coming to the surface of the water, and breathing through holes in the ice in winter habitats.

An otter’s nose is not just for smelling and seeking out food. They can breathe air in through their noses, by coming to the surface or poking it through surficial holes in the ice.

Otters can close their noses (and ears) when they swim and dive underwater, using valve-like muscular flaps.

The throat, or pharynx, of the otter, is like other mammals, connected to the oral and nasal cavities. It functions to regulate food to the esophagus and air to the lungs, by connecting muscles.

The larynx, or voice box, of an otter, prevents food from getting into the trachea, thus keeping it out of the lungs. It is part of the breathing system and allows the otter to create vocal sounds.

Otters can produce sounds such as bird-like chirps, hums, hissing, growling, and a loud “ha!”.

The otter’s trachea (windpipe) is described as an intermediate length as compared to marine mammals and terrestrial carnivores.

A shorter trachea is found in diving mammals, such as the otter since it promotes air exchange for increased lung ventilation.

The feather-like (tree-shaped) bronchial patterns of otters extend from the trachea down into the corresponding lobes of the lungs.

The lungs of otters are triangular-shaped to fit inside the thoracic (rib) cage.

The right lung of an otter has four lobes and is heavier and larger. The left lung is smaller and lighter with only two lobes. The left is smaller since it shares space in the chest cavity with the heart.

Sea otters’ lungs weigh more than river otters’. The larger lung capacity (over two times greater than other similar animals) helps the otter to float in and stay under the water longer.

Lobes receive air from the bronchial “tree branches”, bringing oxygen into the bloodstream while removing carbon dioxide as a waste product.

Importance Of Water To Otters

Even though otters cannot breathe underwater, the water is an important part of their habitats, and essential for their survival.

Their webbed feet, muscular tails, strong eyesight, and sensitive whiskers allow them to skillfully dive, swim, and seek out prey.

Often river otters will use abandoned beavers’ dens, hollowed logs, or burrows in or near the water as shelter, accessing both land and water. Sea otters spend the majority of their time in the water, living in marine kelp beds.

Water is where otters find many sources of food. When an otter can stay underwater longer, it can more successfully find food or escape prey.

Otters do not breathe underwater, yet water is essential to their survival.

Otters have a mammalian respiratory system, which includes the lungs to move oxygen to the bloodstream and eliminate carbon dioxide waste.

Sea otters can stay underwater for up to 5 minutes, and river otters for up to 8 minutes. Their large lung capacity allows them to hold in enough air to dive longer and deeper to catch prey.