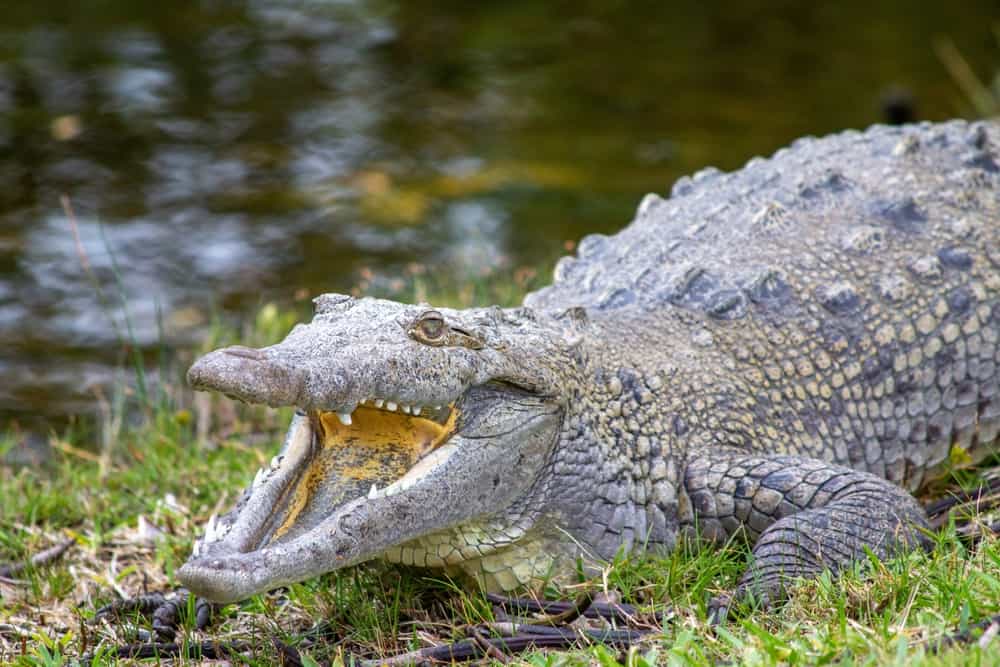 Alligators aren’t pets. They are massive reptiles and apex predators with no known predators other than humans.

Alligators can’t be tamed or domesticated. In theory, it’s possible, but it’s never been done. While some people possess alligators and crocodiles as pets, it’s discouraged and doesn’t mean they are tamed.

Can Alligators Be Tamed?

Alligators can’t be tamed. They don’t have the brain capacity to learn commands like common domestic pets.

While some tourist attractions might offer visitors the opportunity to meet an alligator, they aren’t tamed or trained.

Can You Keep An Alligator As A Pet?

Some states in the U.S. allow alligators as pets. For example, you can own an alligator in Florida, but you need the right license and permit.

However, it’s more common for states to consider owning an alligator, or any exotic pet, as illegal.

You can own an alligator or exotic pet in Alabama, South Carolina, Nevada, and Wisconsin without a license or permit.

It’s hard to keep an alligator as a pet, even with a permit. Alligators are aggressive and can snap, even after they grow comfortable with their owners.

Alligators also have a large diet and need a lot of food. Zoos feed alligators 1-2 times a week, but it’s about 37 pounds of fresh and raw food.

Alligators are not friendly. They are territorial reptiles that will strike if they are hungry or feel threatened.

Alligators have 80 conical-shaped teeth and they swallow their food whole. These large reptiles are fast runners, reaching speeds of up to 35 mph. They can attack quickly and without warning.

It’s common for alligators to eat small dogs so quickly, their owners don’t have time to react or pull back.

Alligators can live in captivity, but this doesn’t mean they are trained, tamed, or domesticated.

You can see many alligators in captivity in zoos and other attractions. It’s more common in southern states, specifically Florida and Louisiana.

There are some differences between alligators born in captivity and those born in the wild. Alligators in captivity live longer and are healthier. Many wild alligators are covered in leeches and suffer from anemia.

While you can’t train an alligator to listen to your commands like it’s a dog, they are food motivated. In captivity, some zoos and facilities perform shows with alligators including alligator wrestling and jumping.

However, there is no signal for an alligator to behave. Instead, alligators in captivity are fed frequently, which slows down their movement. Typically, alligators don’t eat until they are hungry and have digested their previous meal.

Alligators performing “tricks” move when food is offered. For example, performers will dangle meat in the air to entice an alligator to jump up, but this doesn’t mean they are tame.

Alligator care and training also include keeping their spaces clean and as close to possible as their natural environment.

While most alligators in captivity are common and docile, there have been instances where an alligator attacks trainers and other staff.

For example, recently, a reptile center worker was feeding an 8-and-a-half-foot alligator when it attacked the trainer. It bit down hard on her hand and pulled her father into the enclosure.

The trainer was quick on her feet and tried to wrestle the alligator to the ground, holding on tightly to its body.

A visitor to the event asked the trainer what he could do to help. He then proceeded to jump on the alligator’s back and subdue the animal.

The trainer got her arm out of the alligator’s mouth and with help from another worker, left the enclosure. This isn’t the only alligator trainer attack to happen, either.

While you might see alligators and other large animals like tigers in zoos, this doesn’t mean they are tame.

Can Crocodiles Be Tamed Or Domesticated? 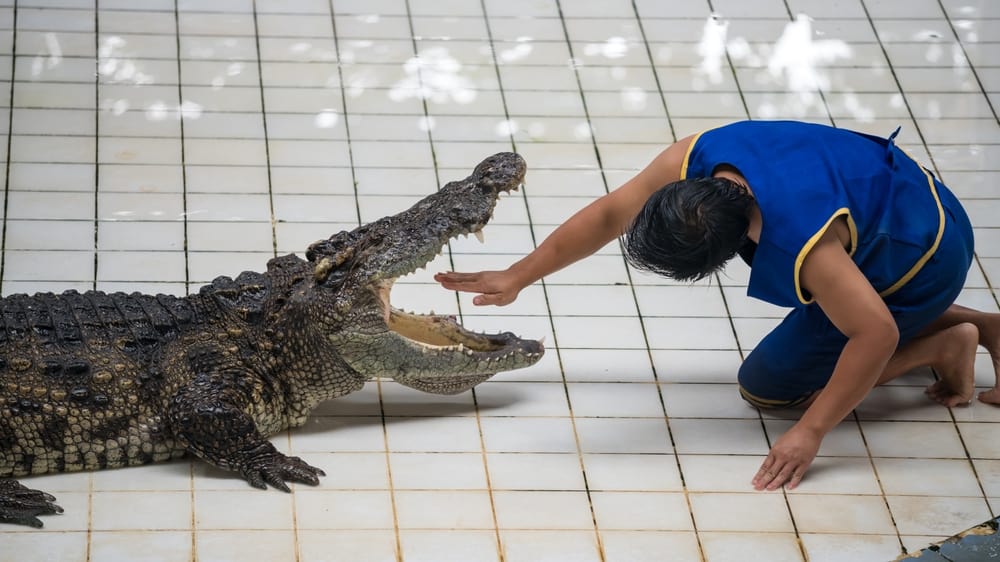 Crocodiles, like alligators, can’t be tamed or domesticated. They are even more aggressive and need lots of room to explore, swim, and hunt. Crocodiles in the wild swim regularly 30 miles or more.

Although rarely, crocodiles form bonds with humans. The biggest example is a man who rescued a crocodile after it was shot in the head.

They played together in the water and formed a strong bond that lasted 20 years when the crocodile passed away. However, this is a rare occurrence. 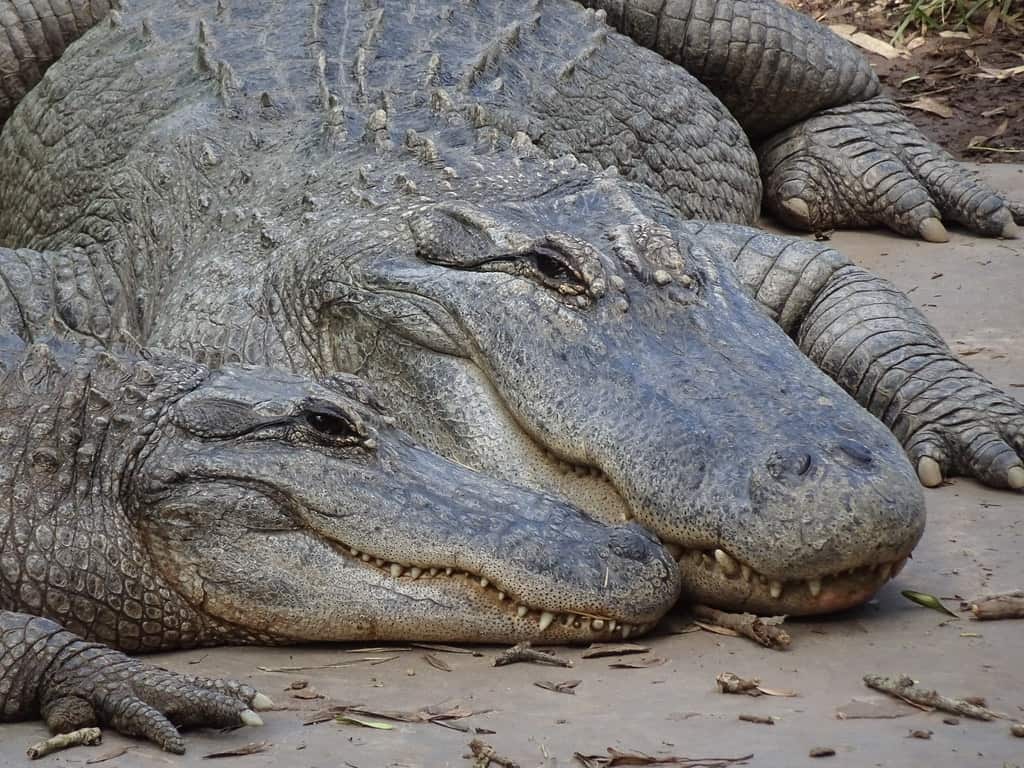 Alligators aren’t very affectionate, but they do interact with each other, especially when sunbathing. Alligators are often seen congregating in large groups, but they don’t travel together.

However, female alligators seem to be monogamous.

According to a study, researchers in a wildlife refuge found that some female alligators seek the same partner during mating season. They noted the same alligator pairing from 1997 to 2005.

Reptiles aren’t affectionate mothers. However, American alligators are an exception.

They guard their nests aggressively and when alligator eggs hatch, mothers carefully carry their children in their mouths to the water. The young alligators stay with their mother for about 2 years.

Alligators don’t make good pets. They can’t be tamed or domesticated. However, you can own an alligator in some states with the proper licenses and permits.

Still, even if you can own an alligator, it doesn’t mean you should. They aren’t affectionate and can snap at their owners at any moment.