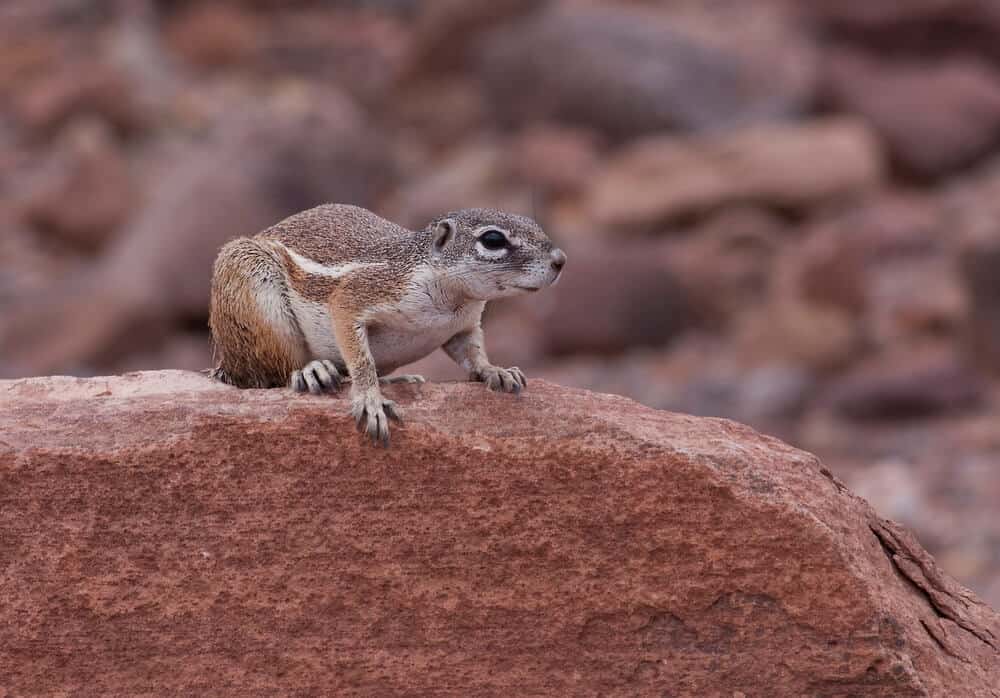 Meerkats (Suricata suricatta) are often at the top of ‘favorite animal’ polls and are famous for standing on their hind legs. They live in southern Africa and are a type of small mongoose belonging to the Herpestidae family.

Meerkats have large eyes, a small, pointed face, and bushy, brown-striped fur. They weigh between 1.4 to 2.1 pounds and are around 20 inches long including their tail.

They have long, sharp claws which they use to dig burrows.

Living in groups of 20 to 50 in underground burrows, meerkats are very sociable animals. Active during the day, they are alert at all times and retreat to their burrows if threatened.

They will always leave one member of the group on sentry duty. If they sense danger, they will bark and whistle to warn the others.

The meerkat is the only member of the genus Suricata, but there are several other animals that share the attributes described above. Some of these animals are related to meerkats, and others look similar or behave in the same way. Here is a list of animals like Meerkats: 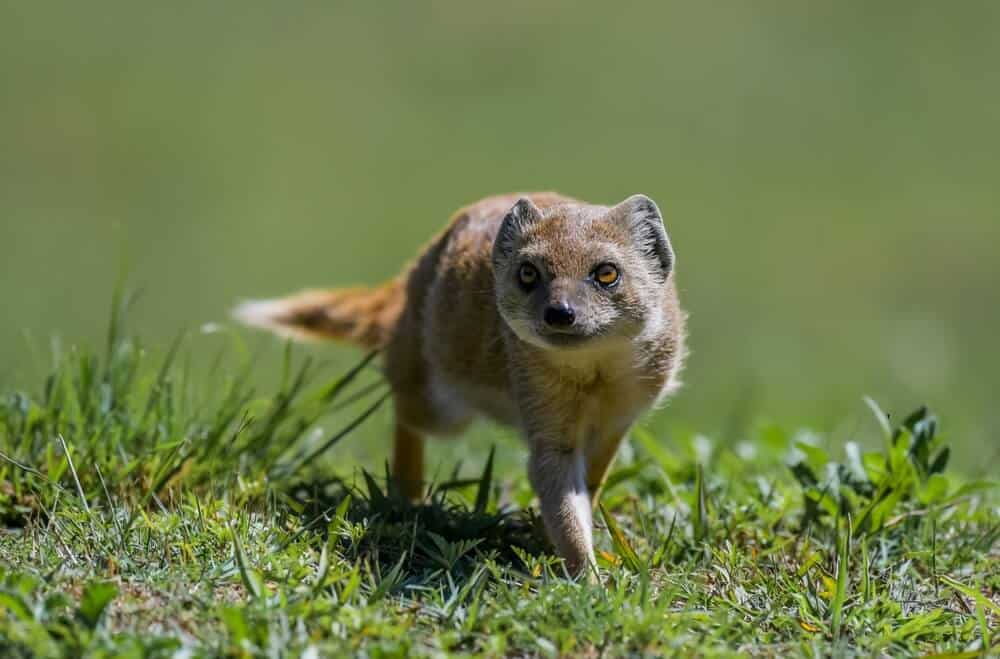 Scientific name: Cynictis penicillata
Quick summary: Yellow mongooses are closely related to meerkats and share many physical similarities. They can often be found living together.

Yellow mongooses share many physical similarities with their meerkat cousins. Like meerkats, they are a member of the Herpestidae family.

Yellow mongooses have a light coat with a layer of yellow fur underneath their brown fur and a bushy tail. They are so similar in appearance to meerkats that they are often referred to as red meerkats.

Mongooses grow to 20 inches long and weigh around 1 lb. They have sharp, long claws to dig through soil and spend the night in burrows underground.

These small animals often share burrows with other animals including meerkats. Mongooses will stand with their hind legs, looking out for potential danger.

Like meerkats,  yellow mongooses live in large social groups. They also share a cooperative approach to raising their young. Meerkats like to hunt scorpions and can tolerate some scorpion venom. Mongooses prefer to hunt snakes and are able to tolerate a certain amount of snake venom. 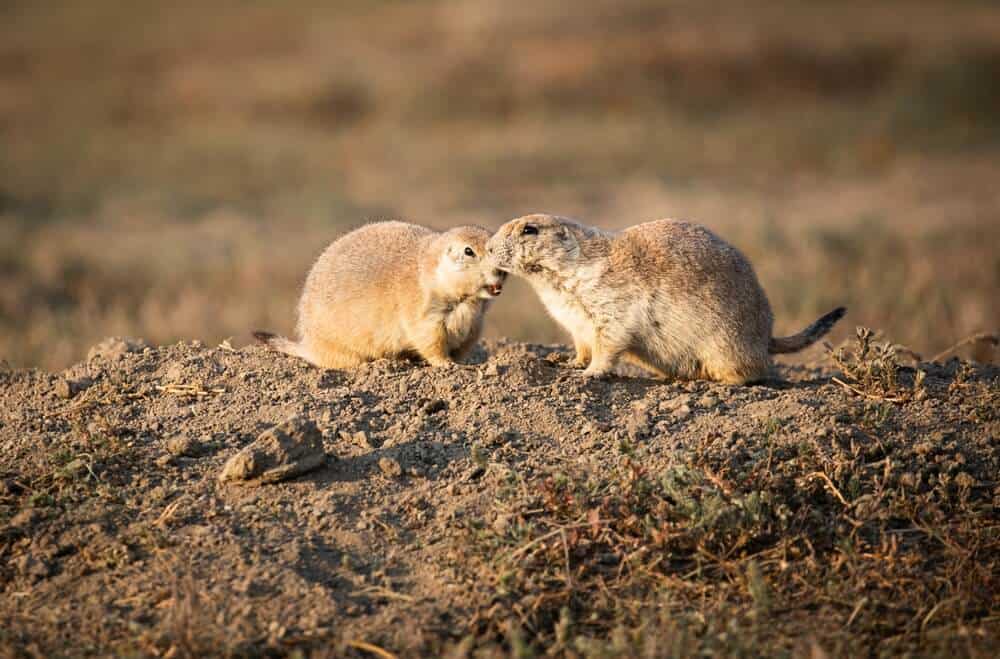 A member of the Sciuridae (squirrel) family, prairie dogs are small rodents that live in the grasslands of North America. They eat a varied diet including insects and grass, and are most active during the day.

Prairie dogs grow to about 16 inches and weigh between 1 to 3 pounds. They have short tails, small rounded ears, and short legs with strong, long claws. Their fur is short and coarse and usually tan in color with a paler belly.

Like meerkats, they are one of nature’s most sociable animals and live in large groups. Active during the day, they stand up to keep watch from their burrows and to defend their territories.

Prairie dogs use a range of different warning noises for different predators. 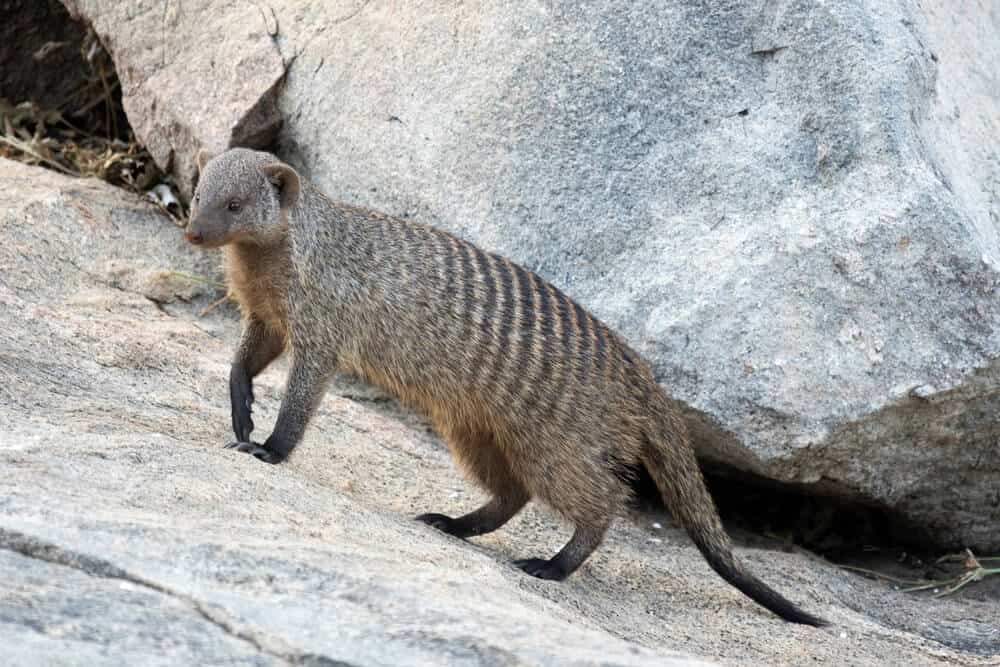 Scientific name: Mungos mungo
Quick summary: Banded mongooses are the cousins of meerkats and are experts at killing snakes.

Banded mongooses have a brownish-gray, coarse coat and dark bands across their back.

They have pointed snouts, short legs, and long bodies. Their strong, long curved claws are perfect for digging and scratching, and they love to burrow.

These small animals live on the open grassland of central and eastern Africa. Banded mongooses eat insects such as termites, scorpions, beetles, and millipedes.

They can grow to around 18 inches long and weigh around 3-5.5 pounds.

The banded mongoose is famous for its ability to kill snakes. They will often provoke snakes such as cobras by biting their tail and lunging at them until the snake is worn out.

One of the most social of all mongoose species, they live in large tribes of up to 40 individuals, almost as big as those of meerkats. 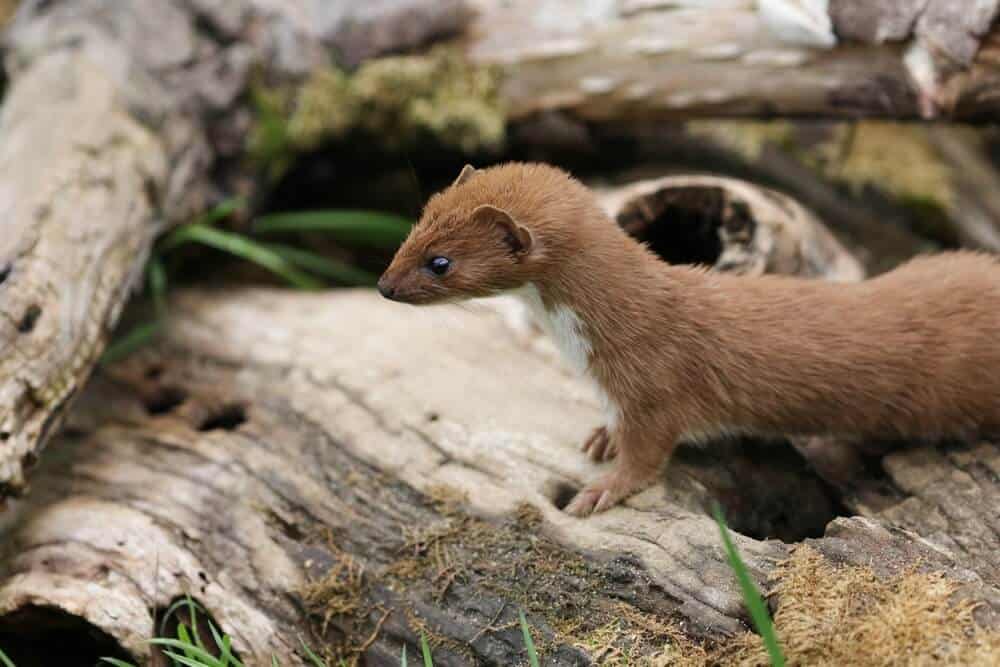 Scientific name: Mustela
Quick summary: Weasels stand on their hind legs to survey their surroundings and to look for danger.

Weasels are small carnivorous mammals found around the world in a variety of habitats. They are a member of the Mustelidae family.

Weasels have similar body proportions to a meerkat with short legs, rounded ears and long necks, and small rounded ears with large eyes.

The size of weasels varies, but most are between 15 and 24 inches long from nose to tail.

Their fur is normally brown, black, or gray with markings ranging from yellow to white. Many weasels turn white in the winter depending on how far north they live.

Weasels share several similarities with meerkats. Both are constantly looking for their prey and predators, and will also stand on their hind legs to see their surroundings better whilst they look out for potential threats. 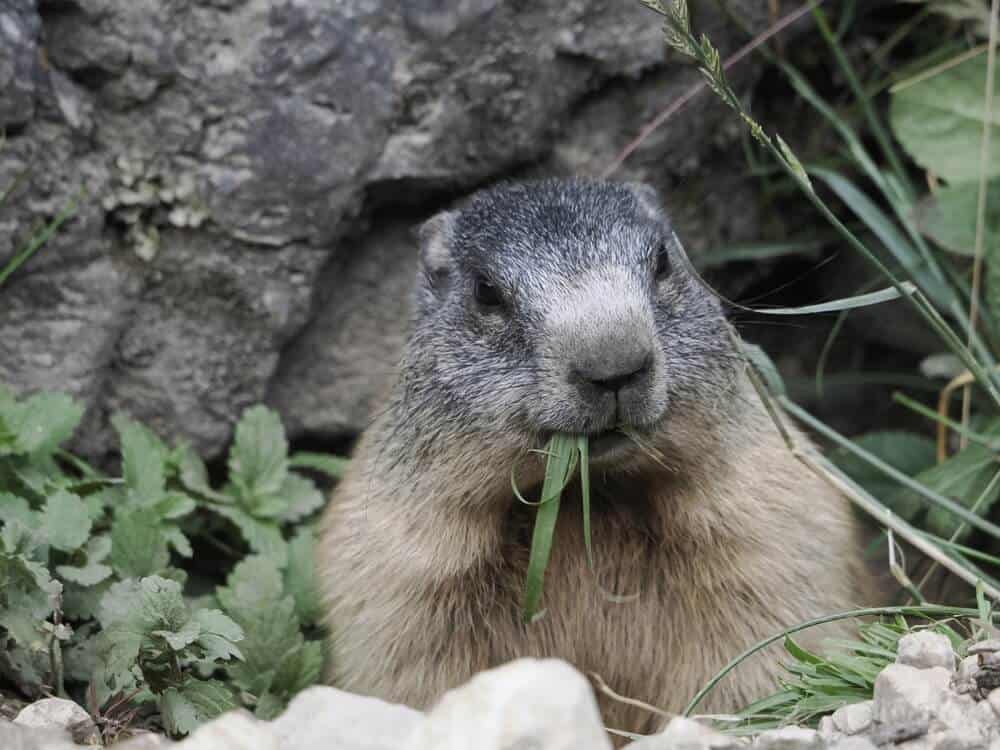 Cute, furry rodents with claws perfect for digging, Marmots live in Europe, North America, and the mountains of Asia. Closely related to prairie dogs and ground squirrels, they are the heaviest member of the squirrel family.

Marmots live in burrows that can be up to 30 feet long. In the summer they are sociable and live in groups, but they hibernate in their burrows in the winter.

Like meerkats, marmots look for predators by standing upright on their hind legs.

Both animals also make warning sounds when they sense danger, with meerkats letting out a bark and marmots making a distinctive loud whistling noise. This alarm call has earned them the nickname “whistle pig”. 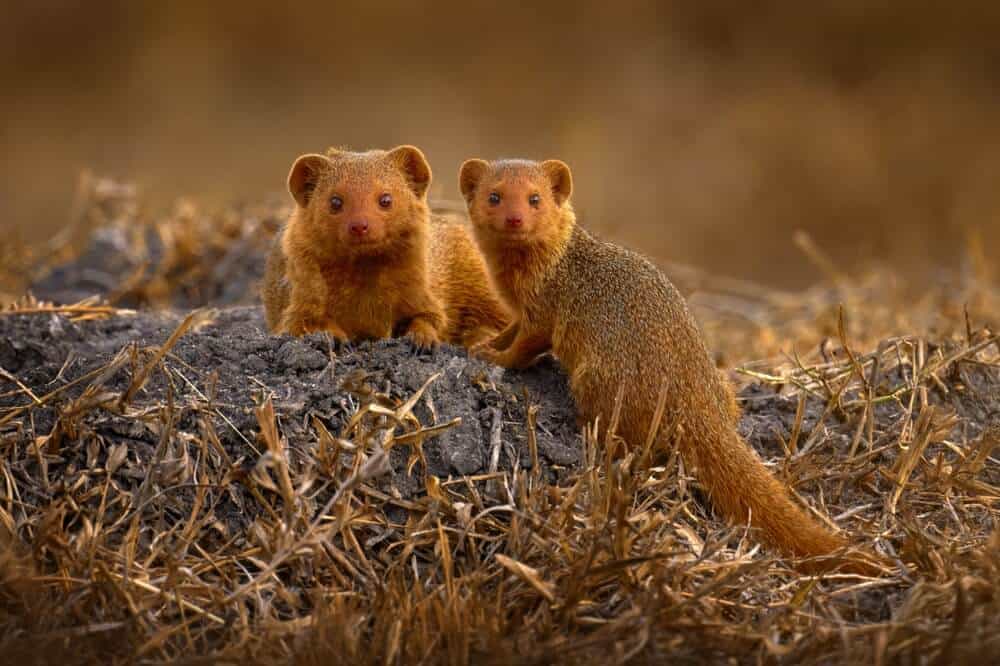 Scientific name: Helogale parvula
Quick summary: A small mongoose that behaves much like its meerkat relatives.

The dwarf mongoose is Africa’s smallest carnivore, and can often be found searching for tasty insects to eat. Measuring just 7 to 11 inches, they are the smallest of all the mongoose species and have small ears and pointy faces.

Their fur varies in color from speckled brown to reddish-buff.

These cute animals live 10 to 14 years in the wild and up to 18 years in captivity. Like meerkats, they live in large groups and are incredibly sociable and curious.

The alpha male of the group usually stands on a termite mound to keep an eye on the territory, and vocalizes to warn the rest of the group if he senses danger. 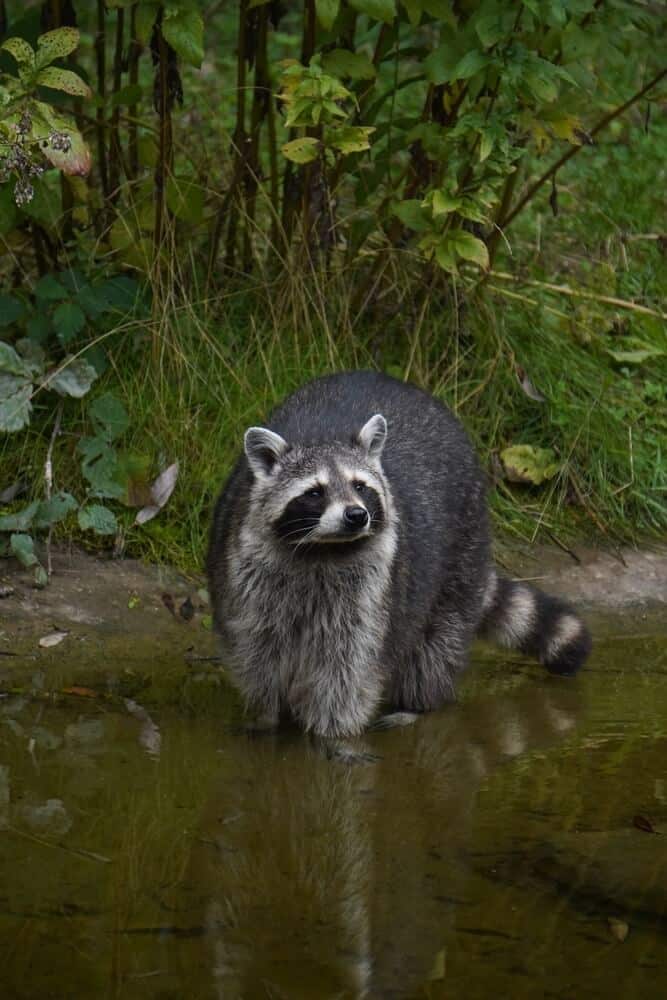 With patches around their eyes and their pointed snouts, raccoons have a physical resemblance to meerkats. Their average body length is 16 to 28 inches, and they are the largest members of the Procyonidae family.

Raccoons are mainly found in the woodlands, farmlands, and urban areas of North America. They are also omnivorous and eat vegetables, fruit, nuts, small mammals, and insects.

Raccoons live for around 2-5 years in the wild, but will often live much longer in captivity – even up to 14 years of age.

Although raccoons are sometimes thought to be solitary animals, they can be found living together in small social groups or packs. 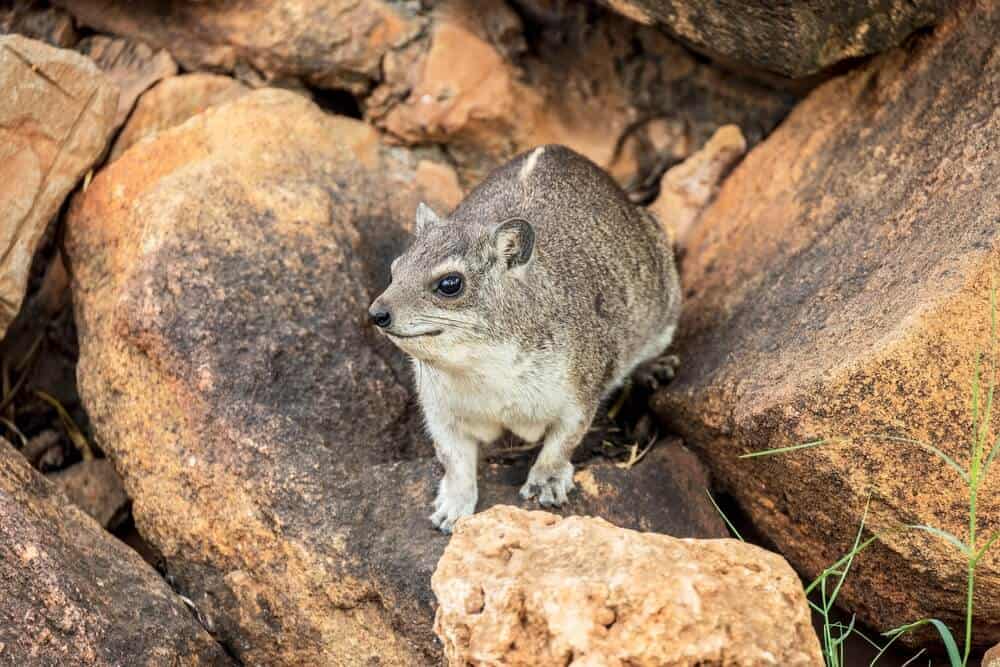 Scientific name: Procavia capensis
Quick summary: A small mammal that lives in large colonies in Africa and the Middle East.

A rock hyrax is a brownish-gray mammal native to the Middle East and Africa, with short ears and short sturdy legs. Adult rock hyraxes can grow to around 22 inches (56 centimeters) and typically weigh 4 to 12 pounds (2 to 5 kilograms).

Rock hyraxes are members of the Procaviidae family. Although they look like rodents they are more closely related to elephants or manatees.

They usually eat a wide variety of plant species including lobelia, but just like meerkats, they will also eat insects and grubs.

These sociable animals live in large colonies ranging from five to 60 individuals. They will also keep lookouts on duty while the colony forages for food, and the lookout will sing if he spots a threat.

The Cape ground squirrel or South African ground squirrel is easy to confuse with a meerkat thanks to their similar faces and small round ears. They are also roughly the same size – around 16.7–18.7 inches.

Ground squirrels like the same terrain as meerkats and live in large groups. They will also sit upright to look around and check for danger.

Ground squirrels are active during the day and love burrowing, and sometimes live together with meerkats.

These cute little squirrels have cinnamon-colored fur and very fluffy tails, which they are able to use as a parasol to keep them cool in hot weather. This saves them up to 5% on their energy requirements. 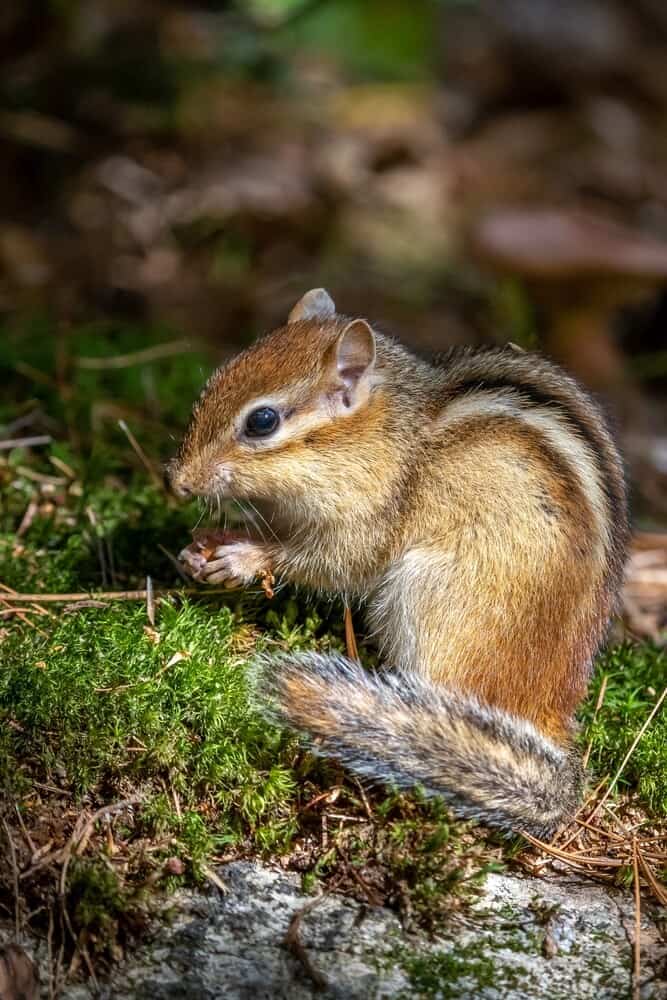 Chipmunks are extremely popular animals and are a favorite among Hollywood animators thanks to their cute faces. Most chipmunks are found in North America except the Siberian chipmunk which is found in Asia.

Most species of chipmunk are smaller than a meerkat and have a body length ranging from 3.1 to 6.3 inches. Their striped fur is typically brown or gray.

They enjoy a diet similar to that of meerkats, eating fruit, seeds, nuts, and also insects.

Chipmunks are excellent at constructing burrows, which can often be more than 11 ft long.  They are also very vocal creatures, who will make noises to warn others in their group if they detect danger. 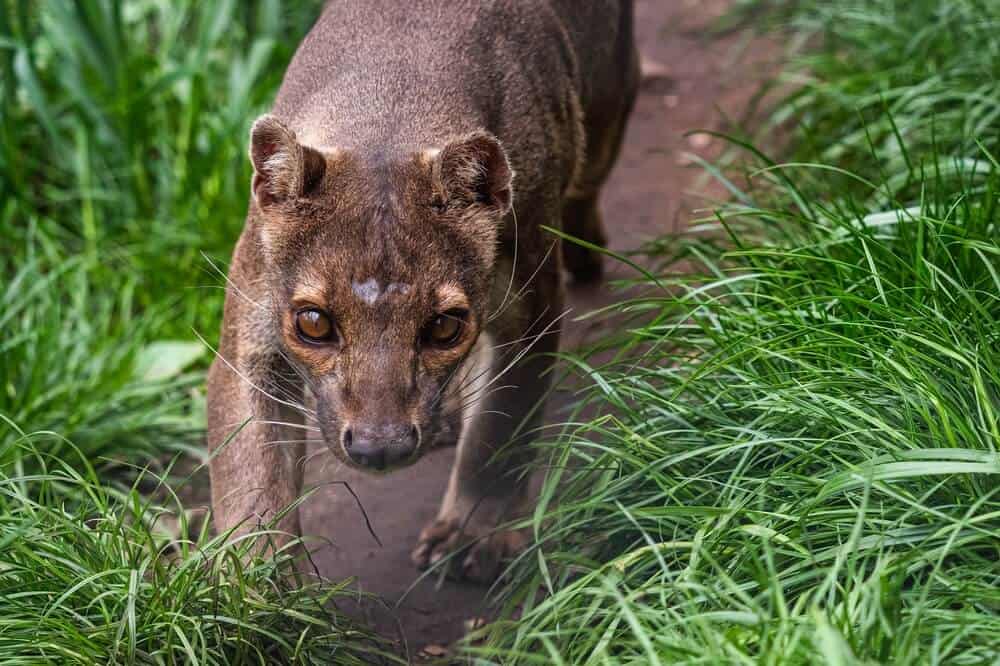 The fossa is a close relative of the meerkat and mongoose. Its large cat-like body is quite different from that of a meerkat, but its cute pointy face and little ears are similar.

Fossas can grow up to 6 feet long and weigh up to 26 pounds and are unique to the forests of Madagascar. They have a short, dense coat which is usually a rich brown color with a hint of gold, and a paler belly.

Their main source of food is lemurs, but they also eat lizards, fish, mice, birds, and wild pigs.

Fossas are the largest carnivore found in Madagascar and usually live up to around 15 years in the wild and up to 20 years old in captivity.

There are currently only around 2,500 left of them in the wild due to habitat loss, and they are classified as a vulnerable species. 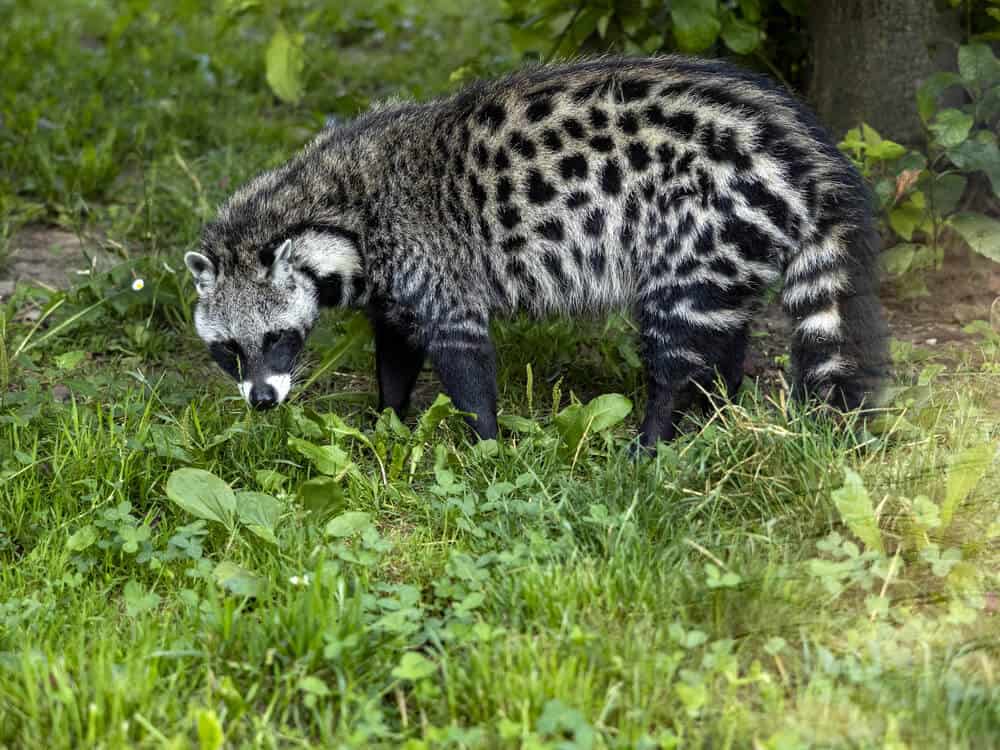 African civets have short, dense fur that is greyish in color with distinctive black spots in rows, and black markings around their eyes.

Weighing up to 44 lb, African civets are usually between 26–33 inches long from head to body, and their tails can grow 13–19 inches long.

In the wild, their average lifespan is 15 to 20 years although they live several years longer in captivity.

African civets enjoy an omnivorous diet including insects, fruit, and vegetation. Civets can take much larger prey including poultry, rodents, and young lambs.

The meerkat is the only member of the Suricata genus. They are closely related to the mongoose (the other member of the Herpestidae family). Both these animals share many characteristics with each other.

Before meerkats were classified in the Herpestidae family, they were included in the old carnivore family Viverridae. This may explain some of their similarities with other animals related to the Viverridae family.

Some of the other animals that closely resemble meerkats share the same habitat. Others live with meerkats in their burrows, making it even trickier to spot the difference in the wild.