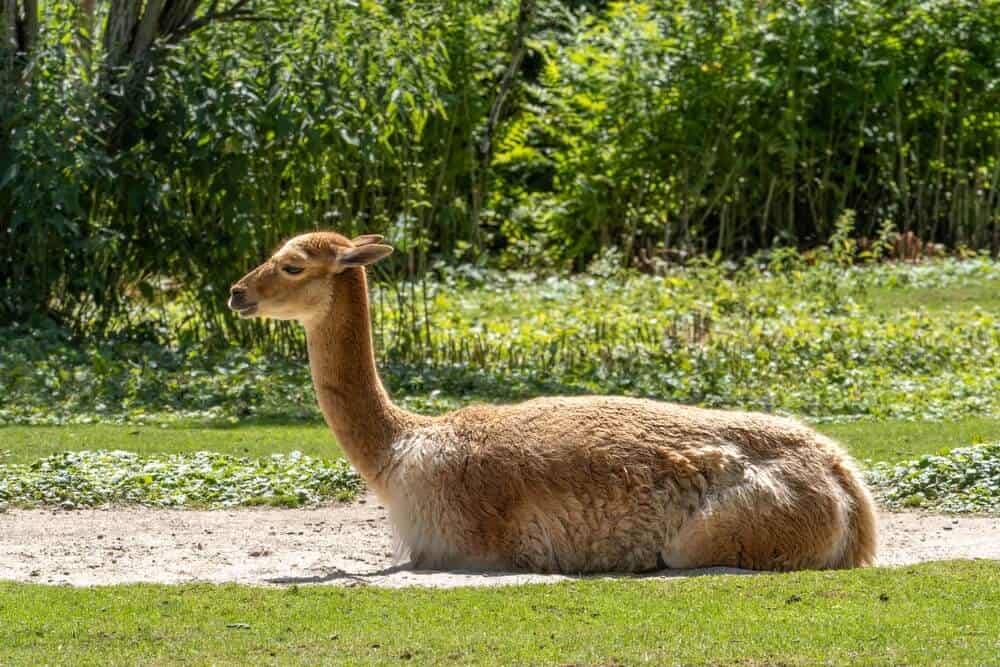 Alpacas, or Lama pacos, are slender animals with long legs and necks. They are cousins of both camels and llamas in the Camelidae family.

Fleece covers their entire body, and they have little other hair. Their fleece comes in many colors and is a key factor in their domestication by the Andean people.

Manufacturers all over the world use alpaca fleece or wool for clothing and textiles. 95% of all alpacas are of the huacaya variety. These alpacas have crimpy fleece coats that grow close to the skin.

Suri alpacas are rarer than huacaya. They have dreadlock-like coats that curl toward the ground instead of close to the skin.

Alpacas are complete herbivores. They only graze on grass in the wild and may eat low-protein hay and feed in captivity. They don’t have much defense against predation except flight. They’re also very social herding animals.

The twelve animals below are like alpacas because of their physical and behavioral traits. Most of them have long necks and legs like alpacas. Others have wooly coats or hair manufacturer’s use for textiles the same way they use alpaca wool. Even animals from different families have similar social habits to alpacas. 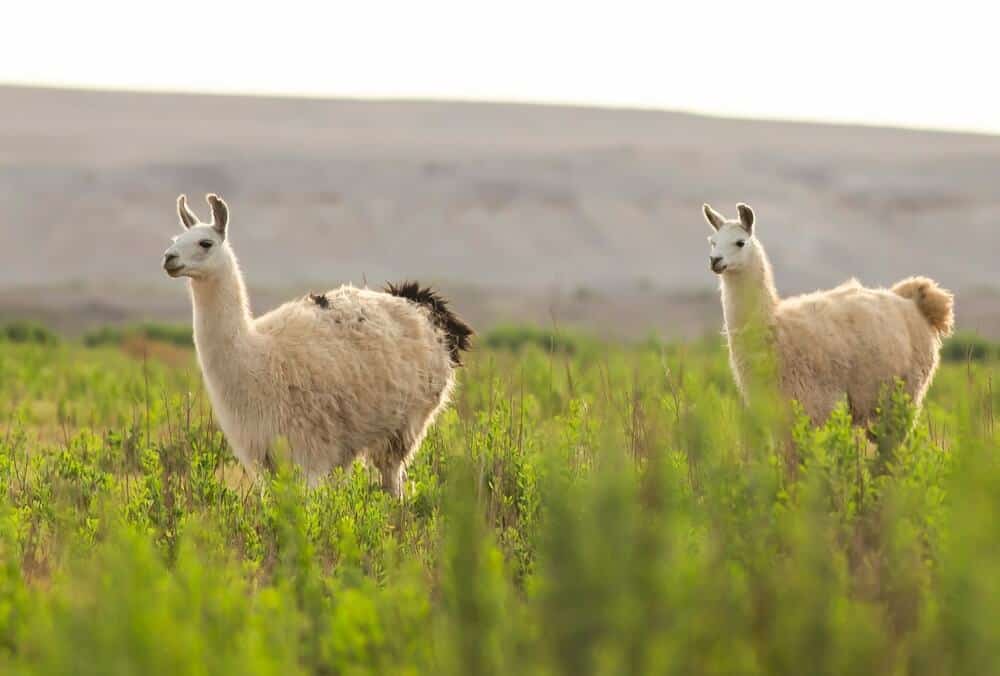 Llamas and alpacas are both close cousins of camels. They are also part of the same genus, Lama. They are so similar in appearance that it’s easy to mistake one for the other.

Llamas and alpacas are wooly animals with four long legs and long necks. Like alpacas, llamas don’t have hooves like other ungulates. Instead, they have two toes with thick keratin nails on each foot.

Both animals are grazing herbivores and have three stomach chambers. Llamas are also very social and prefer to live in herds, just like alpacas.

Finally, there are no wild llamas or alpacas in the world. They are all part of domestic herds. 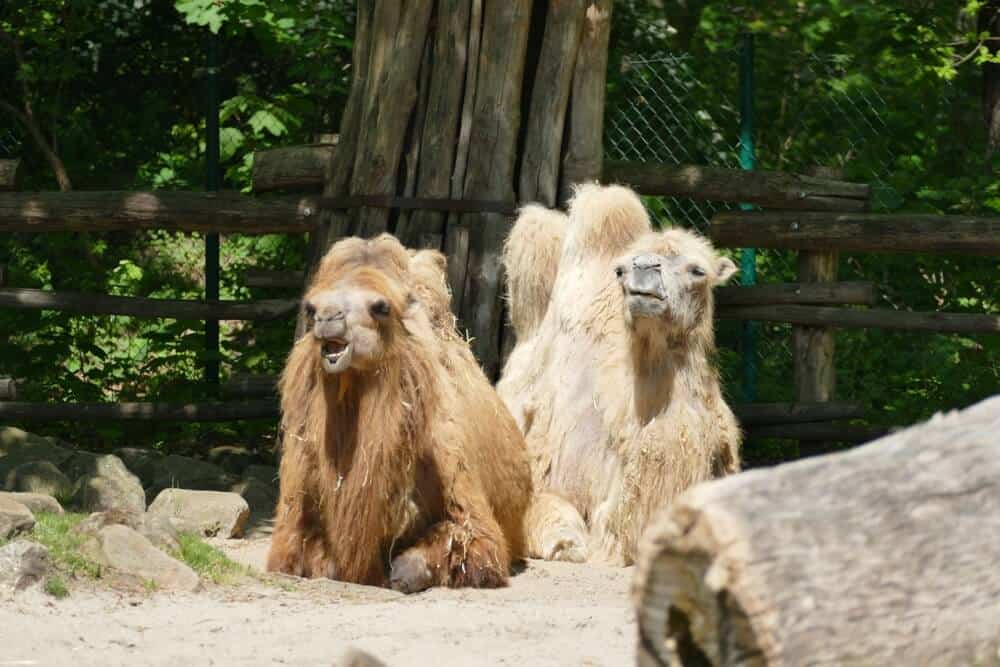 Bactrian camels are a species of camelid that have been completely domesticated. This makes them like alpacas.

There is a wild version of this camel, though. They’re hard to distinguish from each other on looks alone. But genetic studies show that they are, in fact, separate species.

The domestic Bactrian camel has a long neck and two-toed feet like alpacas. They are very vocal, using squeaks and moans, which alpacas do as well.

Bactrian camel hair is a different texture than alpaca wool. Even so, textile manufacturers often use camel hair in their products as well. 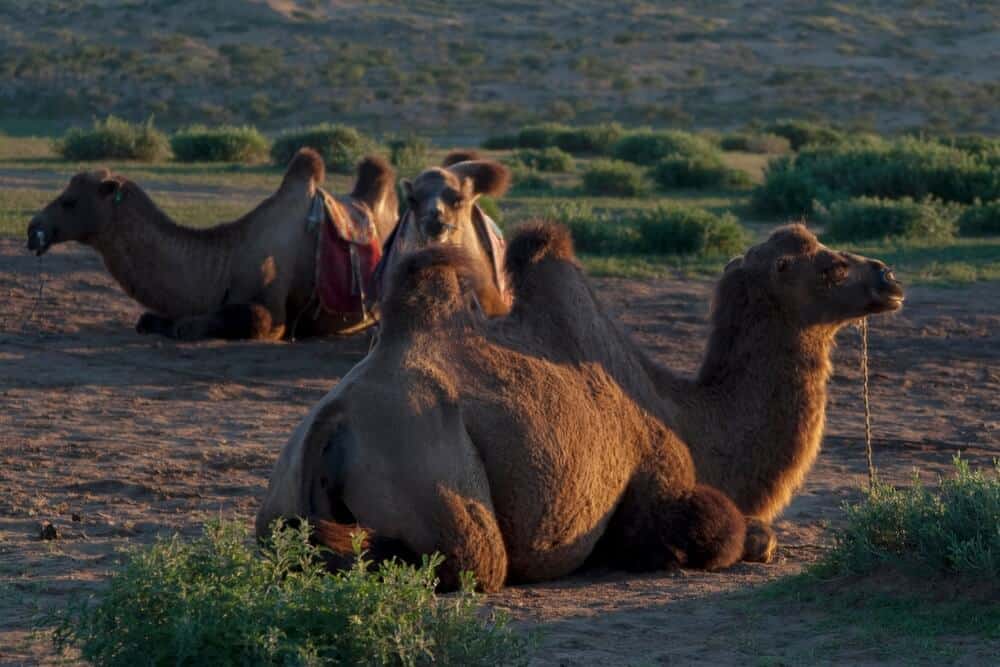 Scientific name:  Camelus ferus
Quick summary: A wild camel with a long neck, legs, and toes like an alpaca.

Scientists once thought these animals were the ancestors of the domestic Bactrian camels. But after genetic testing, scientists now classify them as a different species.

They are still closely related to alpacas, though. They have several similar physical traits. These include the same toes, long necks, and long legs.

But their humps are much less pronounced than domestic camels. This makes them look even more like the hump-less alpaca than the other camels.

Vicuñas are the smallest camelid and have a much frailer build than alpacas. But they still have the long neck and legs that embody the Camelidae family.

They also have fine wool all over their bodies, which manufacturers use for yarn. Like alpacas, Vicuñas are social animals that live in herds. They use vocal sounds to communicate among themselves.

Vicuñas and alpacas can mate together. Farmers will often breed the two together to produce Paco-Vicuñas. This is a combo breed with very fine wool. 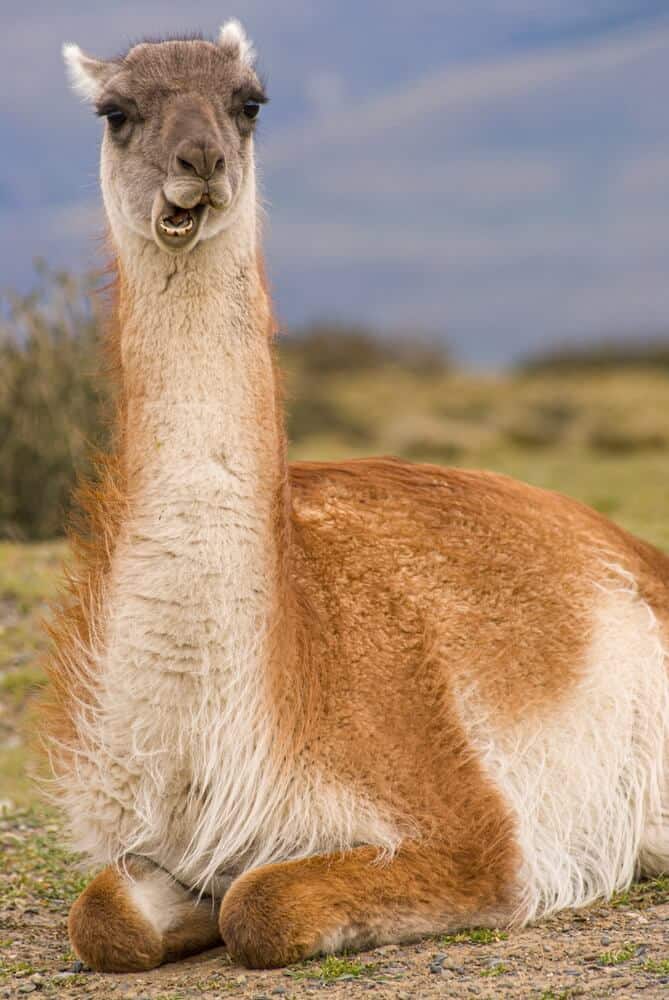 Scientific name: Lama guanicoe
Quick summary: Guanacos and alpacas are close enough that they can crossbreed and produce fertile offspring.

Guanacos live all throughout South America from the desert to the mountains. These animals look very much like alpacas. They both have very long necks, small heads, and a split upper lip.

Guanacos also have fleecy bodies that range from light to dark reddish brown in color.

Dromedary camels have long necks like alpacas. The camel’s neck does have more of a curve, though. They also provide wooly hair for textiles as alpacas do.

Also like alpacas, humans domesticated dromedary camels, at least partially. They are free-range animals under the supervision of human herders.

Within their herds, camels have social behaviors like alpacas. They prefer to stay in family packs and use vocal sounds to communicate with each other. 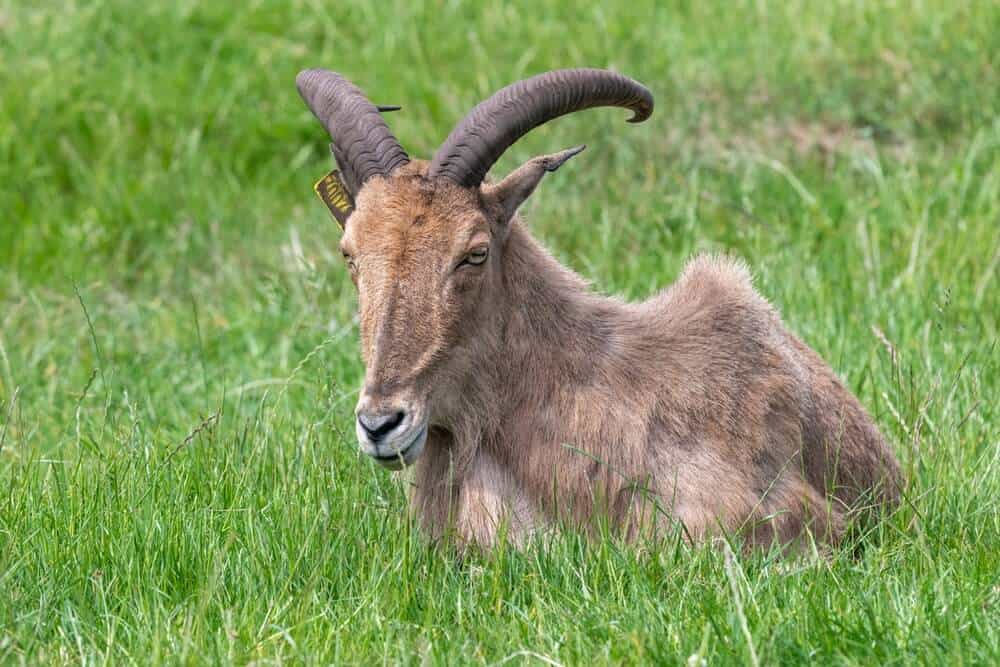 Barbary sheep are also known as aoudad and come from Northern Africa.

Like alpacas, barbary sheep belong to the Artiodactyla order. This means they have hooves or thick nails and an even number of toes.

They are also social animals that live in herds like alpacas. They are herbivores like alpacas as well and feed mainly on grass during the winter. 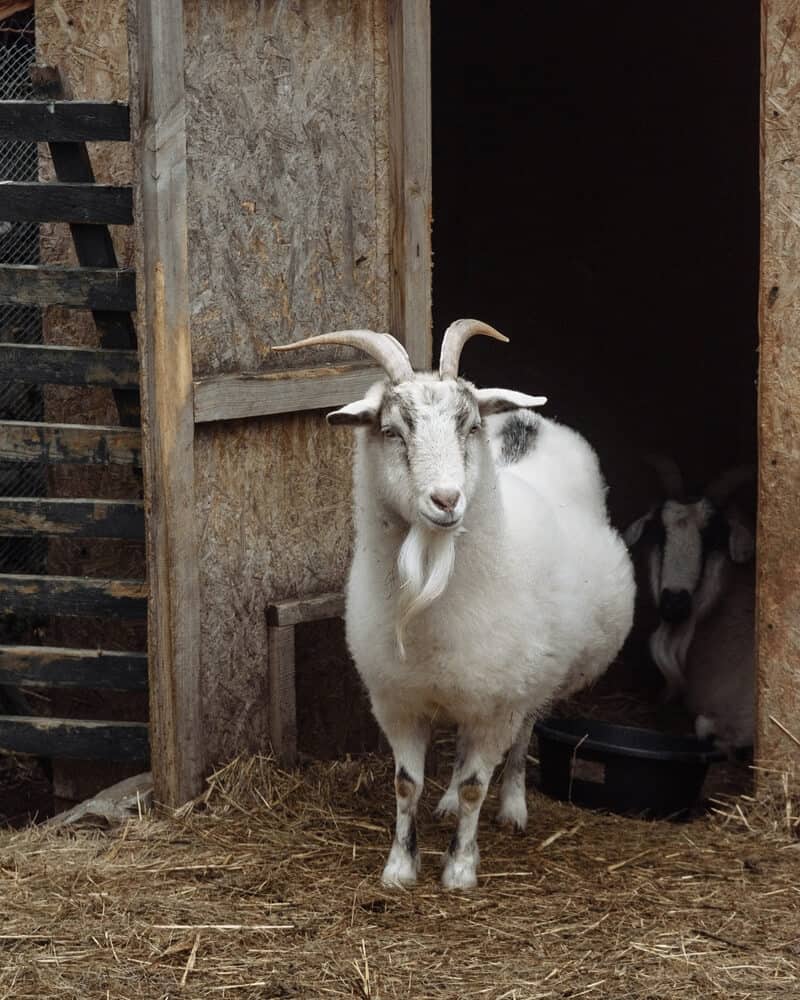 Scientific name: Capra hircus
Quick summary: Farmers keep domestic goats like they do alpacas and have similar ears and tails.

Goats give many of the same material products that alpacas do. They give fur and wool, meat, and milk. Therefore, farmers have also domesticated them like alpacas.

Most goats have a coat of very straight hair, but there are many different breeds of domestic goats. Some breeds with an undercoat of wool like an alpaca’s coat.

They can also have pointed ears and a straight tail that curves upward just like alpacas.

Goats and alpacas are both herd animals who prefer being with other animals. Goats also have a similar diet to alpacas, feeding mostly on grass. 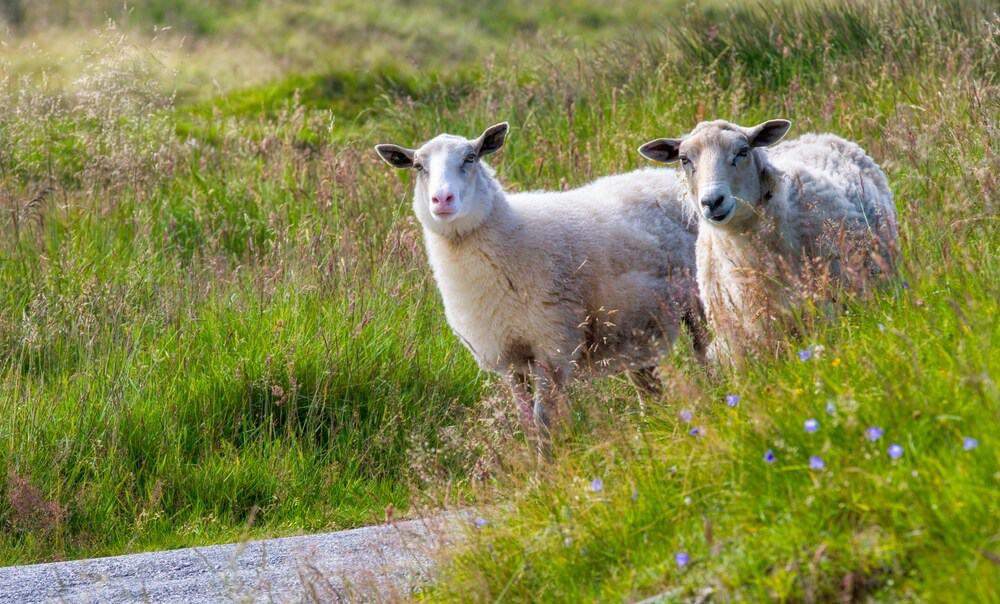 Unlike alpacas, there are many species of wild sheep throughout the world. However, one species has been domesticated to the same level as alpacas. This domestic sheep, also called mouflon, can be used for milk, meat, and fiber.

Since there are so many different breeds of sheep, some look more like alpacas than others. One such breed is the Valais blacknose sheep which has a very blunt face like an alpaca.

Their wool is closer to a suri alpaca than the more common huacaya. It hangs from their body more like dreadlocks and doesn’t curl. 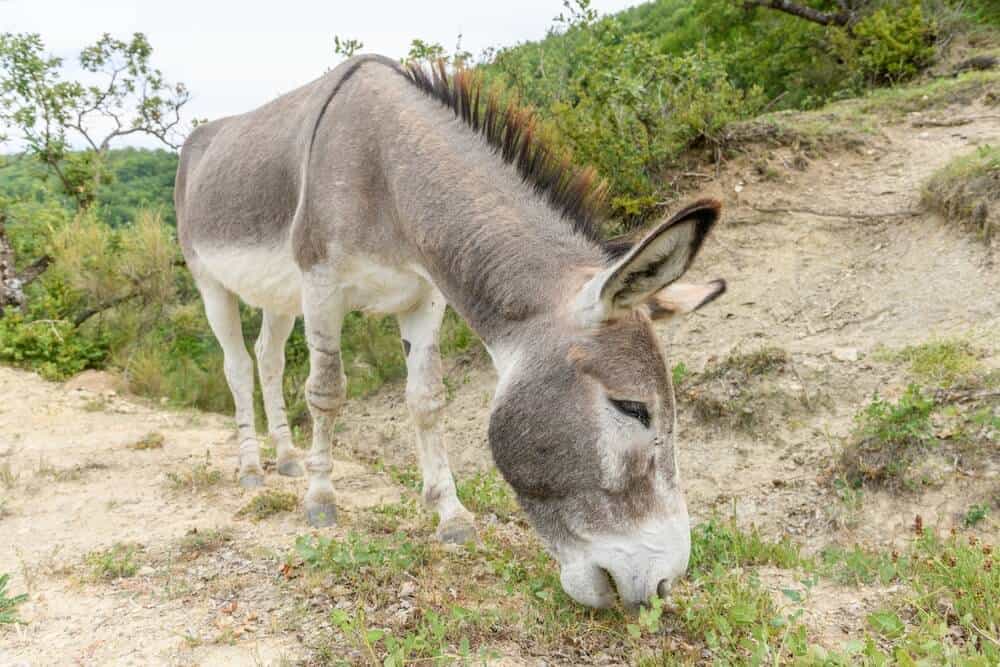 Scientific name: Equus asinus
Quick summary: Some donkeys have been domesticated as pack animals the same way alpacas are.

Donkeys are part of the Perissodactyla order instead of Artiodactyla like alpacas.

Even so, the two share a few parallels. To begin, they have both been domesticated around the world.

People also use both alpacas and donkeys as pack animals. They can carry heavy loads, including people. They’re both herbivores as well as social herd animals. 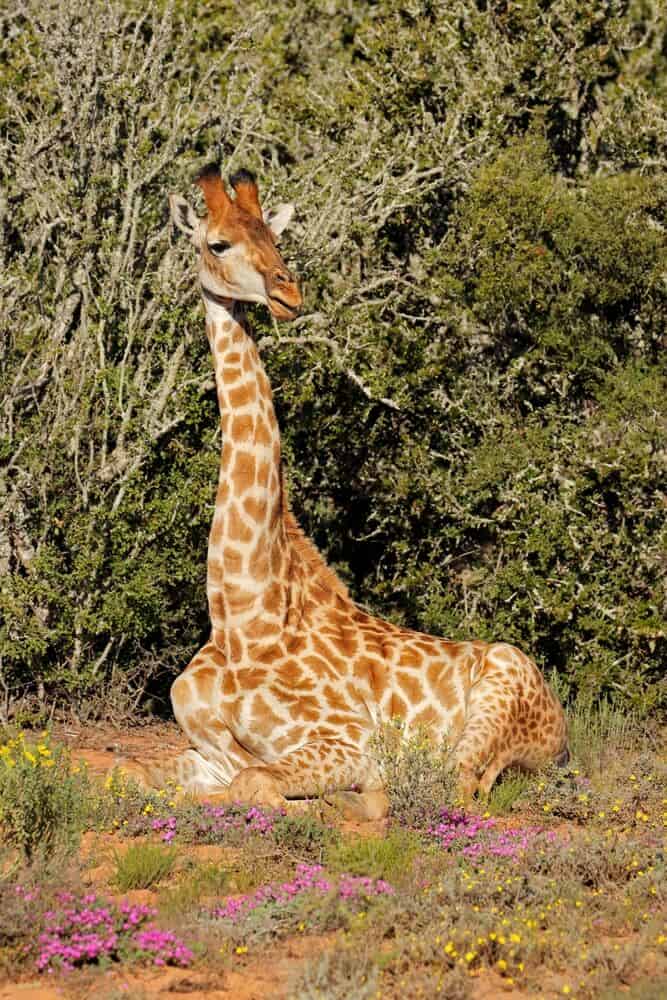 It’s almost impossible to confuse a giraffe and an alpaca, even if they belong to the same order.

A giraffe can weigh over 4,000 pounds, almost 30 times heavier than an alpaca. They also have very different hair types and coloring.

Despite these differences, the two species do share some traits. The defining characteristic of both animals is their necks. Each has a neck that’s very long in proportion to the rest of their bodies.

Additionally, giraffes and alpacas have similar life cycles. The males of each species often have several female partners. Each gives birth to one offspring at a time.

Alpacas and giraffes are both social herd animals. In captivity, they can live for about 20 years. 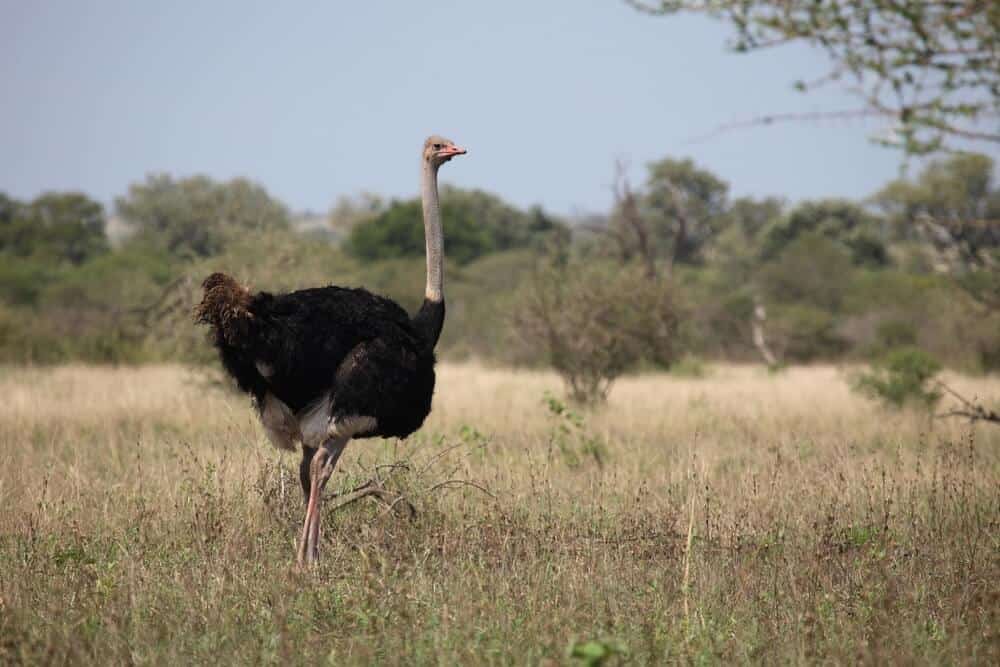 Scientific name: Struthio camelus
Quick summary: Ostriches and alpacas are notable for their long necks and their valuable byproducts.

Although one’s a bird and the other’s a mammal, ostriches and alpacas have some parallels. The most obvious is in their looks; both animals are famous for their very long necks and legs.

Less obvious is their history in trade. Alpacas are now domestic animals we keep for both meat and the fiber from their wool coats.

Ostriches are also an alternative livestock source for meat. Their feathers were also extremely valuable in the 19th century.

The Artiodactyla contains nine families besides the alpaca’s Camelidae family. They’re all related by their even-numbered toes and hooves or hoof-like nails.

It’s not just their feet that tie them together, though. Many of these animals, like llamas and guanacos, have almost the same exact body types and wooly coats. They can be difficult to tell apart from one another at first glance.

Other animals look less like alpacas but have been domesticated in the same way for their meat and fur. Even ostriches share a domestication and trade history with alpacas. They also have the same distinctive and long neck.

The twelve animals in this list exemplify some of the most common traits shared with the alpaca species. Even animals from different families can have a lot in common.